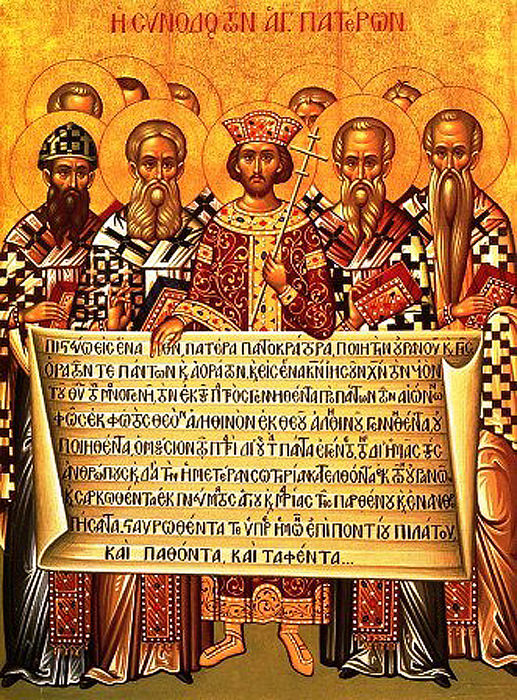 Icon depicting the Emperor Constantine, accompanied by the bishops of the First Council of Nicaea (325), holding the Niceno–Constantinopolitan Creed of 381.1

The Nicean Creed (Latin: Symbolum Nicaenum) is the creed or profession of faith that is most widely used in Christian liturgy. It is called Nicene because, in its original form, it was adopted in the city of Nicaea (İznik, in what is now Turkey) by the first ecumenical council, which met there in the year 325.

The creed is a statement of correct belief, or orthodoxy. The creeds of Christianity have been drawn up at times of conflict about doctrine: acceptance or rejection of a creed served to distinguish believers and deniers of a particular doctrine or set of doctrines. For that reason a creed was called in Greek a σύμβολον (Eng. sumbolon), a word that meant half of a broken object which, when placed together with the other half, verified the bearer's identity. The Greek word passed through Latin "symbolum" into English "symbol", which only later took on the meaning of an outward sign of something.

The Nicene Creed was adopted in the face of the Arian controversy. Arius, a Libyan presbyter in Alexandria, had declared that although the Son was divine, he was a created being and therefore not co-essential with the Father. This made Jesus less than the Father, which posed soteriological challenges regarding the doctrine of the Trinity. Arius's teaching provoked a serious crisis.

The Nicene Creed explicitly affirms the co-essential divinity of the Son, applying to him the term "consubstantial". It speaks of the Holy Spirit as worshipped and glorified with the Father and the Son. The Athanasian Creed describes in much greater detail the relationship between Father, Son and Holy Spirit. The Apostles' Creed makes no explicit statements about the divinity of the Son and the Holy Spirit, but, in the view of many who use it, the doctrine is implicit.1

I believe in one God, the Father almighty, maker of heaven and earth, of all things visible and invisible.

I believe in one Lord Jesus Christ, the Only Begotten Son of God, born of the Father before all ages. God from God, Light from Light, true God from true God, begotten, not made, consubstantial with the Father; Through him all things were made. For us men and for our salvation he came down from heaven, and by the Holy Spirit was incarnate of the Virgin Mary, and became man. For our sake he was crucified under Pontius Pilate, he suffered death and was buried, and rose again on the third day in accordance with the Scriptures. He ascended into heaven and is seated at the right hand of the Father. He will come again in glory to judge the living and the dead and his kingdom will have no end.

I believe in one, holy, catholic, and apostolic Church. I confess one baptism for the forgiveness of sins and I look forward to the resurrection of the dead and the life of the world to come. Amen.2 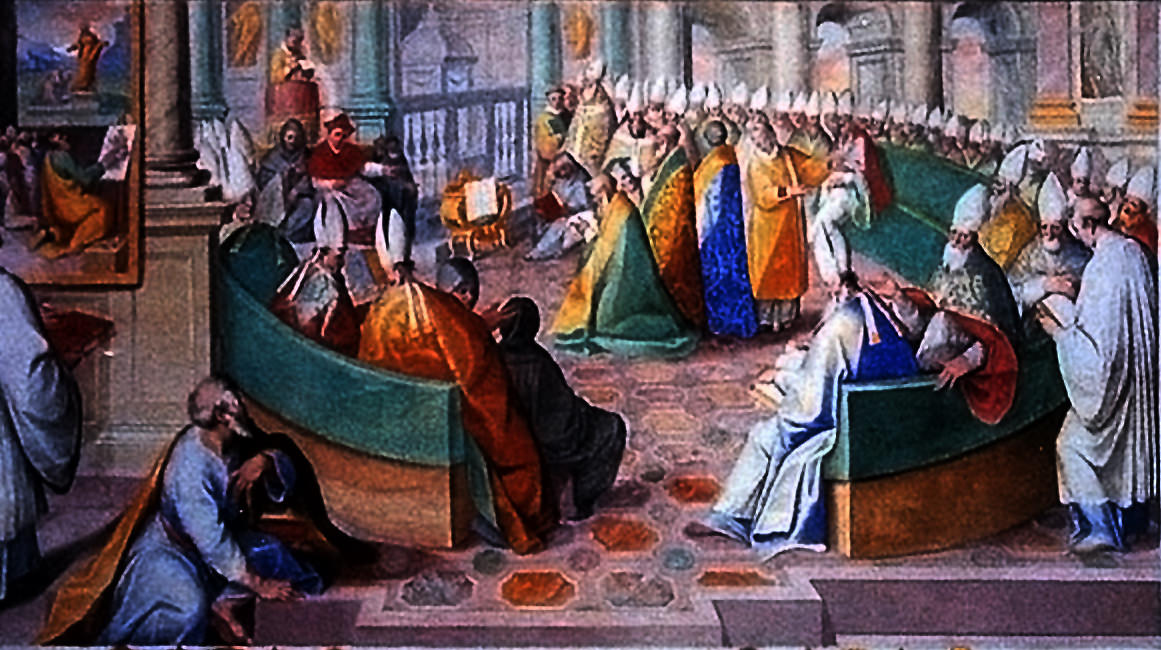