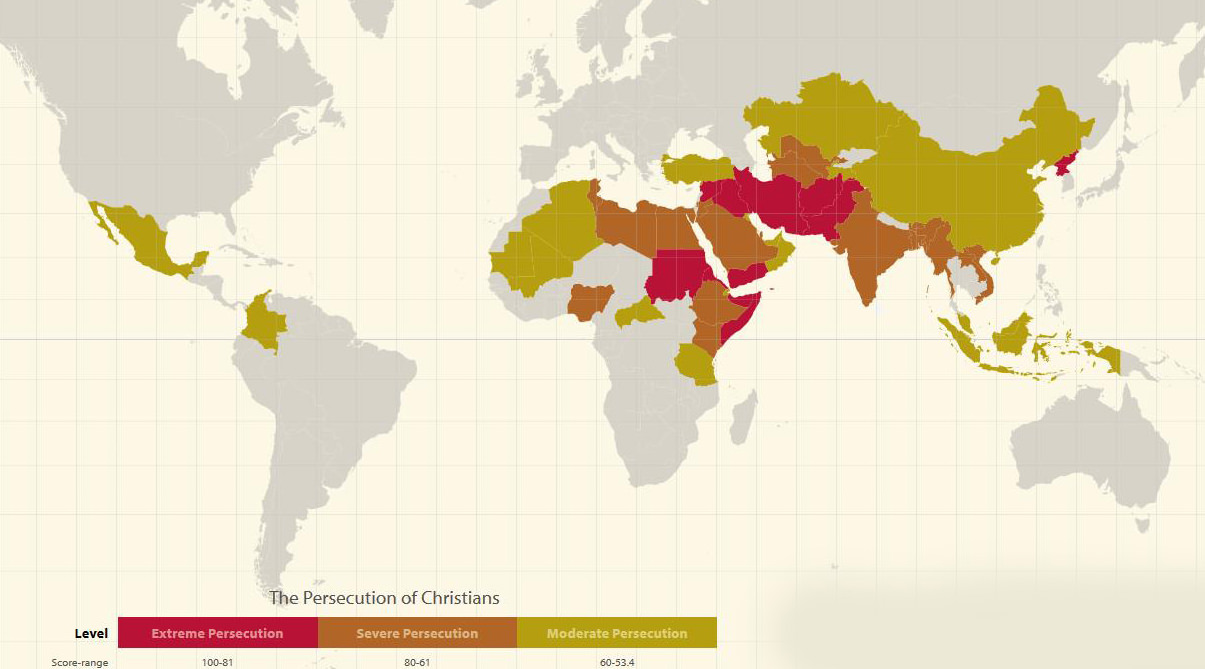 Christian persecution is any hostility experienced from the world as a result of one’s identification as a Christian. From verbal harassment to hostile feelings, attitudes and actions, Christians in areas with severe religious restrictions pay a heavy price for their faith. Beatings, physical torture, confinement, isolation, rape, severe punishment, imprisonment, slavery, discrimination in education and employment, and even death are just a few examples of the persecution they experience on a daily basis.

According to The Pew Research Center, over 75% of the world’s population lives in areas with severe religious restrictions (and many of these people are Christians). Also, according to the United States Department of State, Christians in more than 60 countries face persecution from their governments or surrounding neighbors simply because of their belief in Jesus Christ.1

'Blessed are they who are persecuted for the sake of righteousness, for theirs is the kingdom of heaven. Blessed are you when they insult you and persecute you and utter every kind of evil against you (falsely) because of me. Rejoice and be glad, for your reward will be great in heaven. Thus they persecuted the prophets who were before you.'2

Religious persecution has a long history dating back prior to the establishment of the Christian Church. It can be seen in the early days of the Old Testament in the ridicule of Noah. Institution persecution, as a governmental policy, can be seen in Egypt in the forced slavery of the Israelites prior to the Exodus. Persecution of the Christian Church, which was formed in Christ, dates back to Christ Himself as Herod sought to kill the 'new king' and promised 'Messiah'. As a result Mary, Joseph, and Jesus were forced into exile, and the Sons of the Israel, the Holy Innocents, were slain by mere association. Persecution continued through the influence of the scribes and Pharisees, which resulted in Jesus' Crucifixion, the deaths of many martyrs, expulsion of the Christians from the synagogue, and Christians slayed for sport in the Roman Arena.

In this series, we explore the persecution of the Christian Church throughout its history and attempt to draw knowledge, insights, faith, and courage that will sustain us in our discernment and discipleship.