The Parable of the Prodigal Son

In 1956, Ken Venturi entered the final round of the Masters Golf Tournament with a four shot lead. He had the unique opportunity to become the first amateur golfer in history to win this prestigious event. However, in difficult weather conditions, he posted an 80 in the final round and lost by a single stroke. On being questioned about his collapse, he replied in his usual candid and succinct style, "I was at the right place, but it was the wrong time."

Ken Venturi was in the right place. Holding a four shot lead over the best golfers in the world proved he had the necessary skills to win, but perhaps lacking experience or composure, it was simply the wrong time. 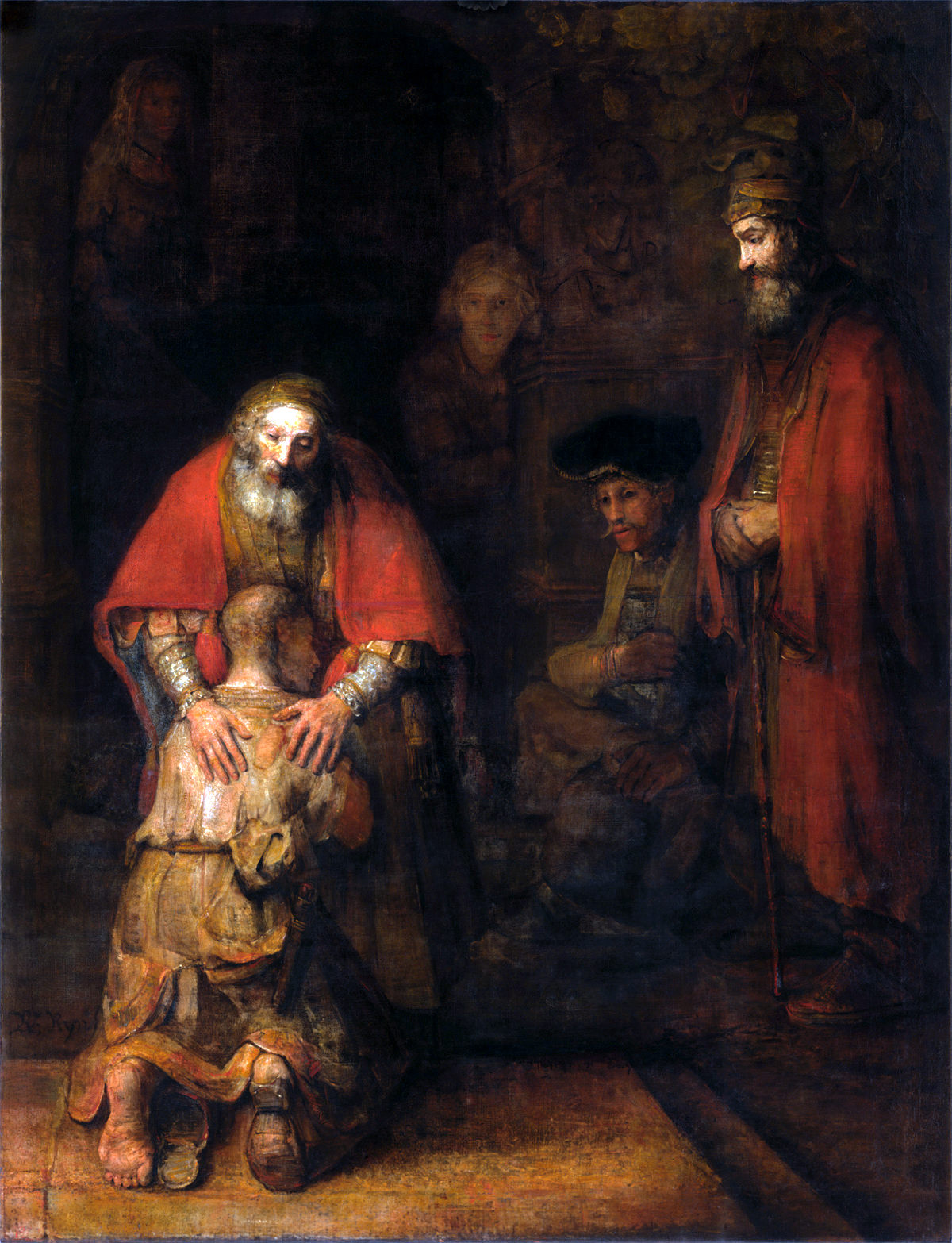 Return of the Prodigal Son
by Rembrandt van Rijn 1

Later in 1964, despite the sweltering heat and being warned by doctors three times not to continue, Venturi, in a heroic performance, captured the Unites States Open. Again he was in the right place, but now it was the right time.

In the chapters preceding today's first reading the Israelites are preparing to enter the promised land. They remained in the desert until they gained the faithfulness and trust required of God's chosen people and the discipline necessary to become a holy nation. For forty years they were in the right place, but it was the wrong time.

In today's reading they begin a new era as they cross the river Jordan and enter the Land of Canaan. They enter the land God promised in the same manner as they fled from Egypt, crossing the River Jordan on dry ground, just as they crossed the Red Sea in their flight from Egypt.

Joshua told them how this would come to pass. He appointed twelve men to carry the Arc of the Covenant into the flowing river. As soon as the feet of the twelve priests touched the water, the river stopped flowing and the people crossed over into Canaan. On the same day they celebrated the Passover and the manna which had sustained them for forty years ceased. Their passage into the promised land marked the beginning of a new era. They were in the right place, and finally it was the right time.

Today's Gospel reading is the Parable of the Prodigal Son. The word 'prodigal' means one who is excessively generous, lavish, or one who squanders his wealth. This is perhaps the most taught of all Biblical readings. It has been the subject of countless homilies and retreats. It is such a masterfully told story, with such great insight in both human behavior and divine nature, that it is virtually inexhaustible in it's riches.

The parable begins with the Pharisees complaining about Jesus association with sinners and tax collectors. The law of Moses directed the Jews to separate themselves from sinful conduct in order to remain pure at heart, but the Pharisees have perverted the law into a smug superiority. Jesus responds to their attitude and lack of compassion by telling the story of the Prodigal son. He depicts the Pharisaical attitude in the person of the elder son.

The scene begins with the younger son asking for his share of his father's estate. After a few days he leaves for a distant country, where he wastes his family's wealth in riotous living and adopts the customs of the Gentiles bringing both defilement on himself and disgrace to his family.

When a famine sweeps across the land, and his resources are spent, he finds work caring for and feeding pigs, an unclean animal. He is desperate, but no one will help him. Facing starvation brings him to his senses. He remembers with fondness the love and security of his father's house and decides to return home.

He begins his journey home by forming the words of his apology and making a plea for readmission and employment. "Father, I have sinned against heaven and you. I no longer deserve to be called your son; treat me as you would treat one of your hired workers." In forming the words of his plea, he begins to identify and appreciate all he had been given, the blessings he has received, the extent of his degradation, and the depth of his sins. In recognizing his guilt, he begins the first phase of reconciliation, awareness and a true contrition for his sins.

When the son arrives he is overwhelmed by his father's joy. His father embraces him, kisses him and welcomes him home. The son is brought to his senses by the famine and loss of his inheritance, but his father's embrace causes a profound change in his heart. His rehearsed apology now takes on new and deeper meaning – it comes from experience, it comes from his heart. The is the second element of reconciliation – confession, taking responsibility for what we have done.

Notice, however, that the father does not seek out his son to bring him back, as the shepherd sought out the lost sheep in the preceding parable. He does not search for his son, like the woman searched for the lost coins. Why is this? Didn't Jesus come to search out the lost sheep?

Two reasons stand out that explain the father's action. The first is respect for the son's freedom. God, our Father, will never violate our free will, even if it means we are lost to Him.

The second reason is the father knows his son. Reconciliation offered too early may escalate differences and rekindle arguments, rather than heal. However, if we delay too long the wound becomes set and we may miss the opportunity to reconcile.

Instead of seeking out the son, which may be appropriate in some circumstances, the father keeps a vigil, watching for his son's return. He looks for some movement or softening which signals the opportunity to reconcile. He is at the right place and waits for the right time.

Waiting for the appropriate moment to reconcile, however, does not mean postponing forgiveness. Forgiveness is not a state where all is well again. It is an act of the will. It doesn't require two parties in order to forgive. A failure to forgive would damage the father even more than the son.

I'm sure the father in this story had forgiven his son long ago. It's not unlikely that he foresaw the events that would take place. The father allowed his son the freedom to make a mistake. He allowed his son to leave. He gave his son a share of his estate.

It's also clear that the father is primarily interested in his son's spiritual development, in his maturity. Not once does the father mention the lost money, the damage to his reputation, or any lack of respect from his son. Nor does he chastise his son's behavior, or require the son to re-earn his trust.

This brings us to the third, as most often overlooked, element of reconciliation – restoration. How does the father restore his son? He dresses him in fine robes which restores his personal dignity. He puts shoes on his feet, thus giving his the status of a free man. He places a ring on his finger, most likely a signet ring, that allows the son to conduct family business and legal affairs. He calls for a celebration to celebrate his son's return.

As love is an act of the will, so is forgiveness. Restoration is the implementation of the act of forgiveness. It is not enough to simply forgive. The wounds must be healed. Dignity must be restored. How often, instead of restoring our relationships, do we unwittingly inflict more damage with chastisement and mistrust.

The end product of trust, contrition, taking responsibility, and restoration is mercy. Our primary relationship with God is one of our trust in His goodness, and His response to us is Mercy. This is a fundamental relationship we have not only with God, but as parents and in our families. It starts with trust, proceeds through humility, and concludes in God abundant mercy.

The Scriptures are filled with stories of prodigal sons – both individuals and nations who have squandered their inheritance. Adam, the original prodigal son, squandered the inheritance of all mankind, and lost living with God in the Garden of Eden. Cain lost his inheritance by killing his brother Able. Cain was banished from the produce of the soil, and sentenced to be a restless wanderer. The people of Israel abandoned God, ignored the warnings of the prophets and was overrun, taken as slaves to Babylon.

When the feast begins, the older son returns from the fields. He is told the reason for the feast, and becomes very angry, refusing to enter the house. His father tries to reason with him. "Everything I have is yours", he explains. Your brother's transgressions haven't cost you a dime. Why are you so angry? But the older son refuses to forgive, bringing up the anger and bitterness of old unresolved issues, differences his has failed to reconcile with his father. His is so secure in his self- righteous that he doesn't even recognize his sin. He serves dutifully but with an unloving heart. He is unwilling to dismiss his brother's transgressions, and thus brings sin upon himself.

How we react to sin reveals our inner nature. Adam tried to hide, hoping his sin would not be discovered. Cain was more defiant, refusing to accept responsibility for his sin. He challenged God saying, "Am I my brother's keeper?" King David plotted the death of Uriah in an effort to cover up his adulterous affair with Bathsheba.

The elder son in this parable, like the Pharisees, is so smug in his self- righteousness, that he cannot even recognize his sin. He is obedient to the law, but has no love or compassion in his heart. Thus his sin, a violation of the command to love God and neighbor, is the greater sin.

Over the years, as I have listened to this story, and being the youngest son, I have always identified with the youngest son. But as I reflect, I think we are often more like the older brother. We are more like Adam or Cain in how we deal with our sin.

How do you deal with your sin? Do you have the courage to be forgiven as did the younger son? Do you have the humility to accept the father's loving embrace? Are you willing to restore the dignity of those you have hurt, or be restored by those who have hurt you?

We gather here at the Eucharistic Supper, the Feast Our Lord has prepared for us. We gather to receive the Body, Blood, Soul, and Divinity of Mercy Incarnate. Are we willing to forgive? Are we ready to forgive? We're at the right place? Isn't it also the right time?