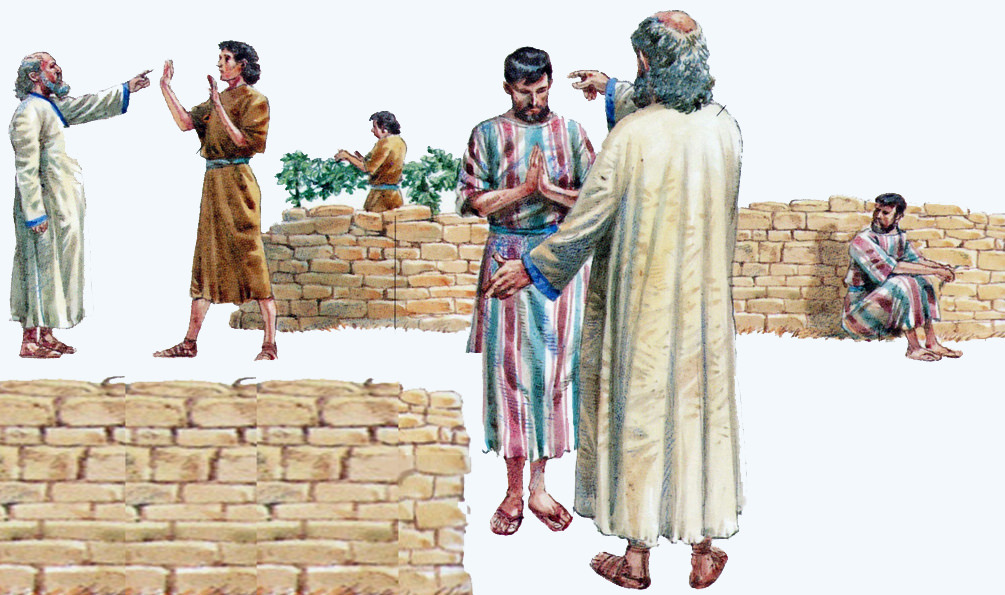 The Parable of the Two Sons
by DK New Testament 1

In today's gospel Jesus tells us the Parable of the Two Sons. It's a simple story about humility, honesty, and obedience. In the text we note that Jesus is speaking to the chief priests and elders of the people, and there is a profound tension in their conversation. However, certainly there were others present and listening.

Jesus is setting before us a picture of two, very imperfect, sets of people, neither of which brought full joy to their father. Both were unsatisfactory; but the one who, in the end, obeyed was undoubtedly the better of the two. The ideal son, of course, would be the son who accepted the father’s orders with obedience and respect, and who faithfully carried them out.

In one set of people, exemplified by the second son, there are those whose words are much better than their actions. They will promise anything; they make great orations of piety and fidelity; but their practice lags far behind. Their actions do not match their words, like the chief priests who feigned piety to cover-up their wickedness. They used the priesthood for personal status and gain. They fattened their money-belts by stealing the houses of widows. They coveted places of honor in the synagogue, and reciting lengthy prayers in public places in an attempt to hide their iniquities.

Jesus had every right to expect complete faithfulness from His priests, just as He has the right to expect complete fidelity from us. However, it is not just their iniquity that condemned them. Given their knowledge, training, and vocation, the chief priests should have recognized in Jesus that the hour of their visitation, the coming of the Messiah, was at hand. Instead, divorced from any true spirituality, they ardently defended their status and ill-gained wealth. And, in their arrogance, they refused to even consider the possibility that a poor traveling rabbi from the back country could be the Messiah.

These rulers of Israel said “Yes” to God with their lips, but refused to enter the vineyard. They said “Yes” to God, but perverted their vows. As Jesus said, “They tie up heavy burdens (hard to carry) and lay them on people’s shoulders, but they will not lift a finger to move them.” 1 Instead of recognizing Jesus as the fulfillment of the prophesies, they conspired to put Him to death. Even after seeing His love of the Temple, that the lame could now walk, and the blind could now see, the Pharisees and the Sadducees set aside their theological differences and agreed that Jesus must be tried, condemned, and put to death.

In the Psalm we read, “[God] guides the humble to justice, and teaches the humble His way”. 2 In the parable, neither son brought full joy to his father. Neither son responded in humility. Neither son saw working in the vineyard as a privilege. And neither son expressed true love for their father.

In contrast, the second group of people's actions are far better than their words. They are the outcasts, tax collectors, prostitutes, and notorious sinners. Once, they said “No” to God, but now they are found doing kindly and generous things, almost in secret. They allowed Jesus' preaching and forgiveness to change their hearts and lives. They repented, entered, and found the peace they sought in Christ's vineyard.

These outcasts were motivated, not by the law, nor regulations, nor tradition, but out of a deep and abiding love of Christ. And, they renewed that commitment many, many times through their lives as they matured as Christians, and as life presented new challenges that tested their faith. They knew from experience that faith is a day-to-day commitment, a “Yes” said over and over again in large and small ways.

As Christians, we know that laboring in the vineyard is not a chore; it is not a job; it is a privilege. It is our chosen vocation - our life's work. True faith is so much more than beautiful words, or pious gestures, or places of honor. These outcasts, these sinners, moved by the Spirit of God, joyfully took their place in the vineyard. They acted on the same words we express here in prayer, and like us, they wanted to be found worthy to enter in Our Lord's garden.

Each person is responsible to God the Father to live as He directs, and no one should even consider the notion that He can be deceived. Sadly, many lives appear to be lived in exactly that way. Mark Twain once said, “You cannot pray a lie.” 3 Regardless of the pressures we face, we cannot turn away from what is right. The first son said, “No”, then thought better of it and went. The second son said “Yes” but never showed up.

A wise man once said, 'Eighty percent of discipleship is just showing up'. In this parable Jesus teaches us that promises can never take the place of performance, and words are never a substitute for deeds. Faith is a day-to-day commitment. It is saying “Yes” to God, over, and over, and over again - in our words, in our hearts, and in our lives, that we may truly bring joy to Our Father.