3rd Sunday of Lent - Cycle B

Jesus did not need anyone to tell Him about human nature. He himself understood it well.

Of all the disappointments that Jesus endured, a few must have stood out as the most heart-breaking. We don't generally think of Jesus, the Second Person of the Trinity, the All-Knowing God, as being disappointed. But His disappointments are clearly evident in Sacred Scripture. Theologically, being all-knowing doesn't imply that our decisions, that our course in life, is fixed. Our Good Lord gave us free-will. He wants us to choose Him, to choose righteousness, out of freedom, and out of love. 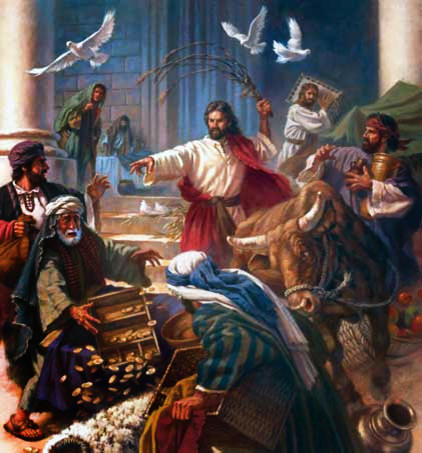 Salvation is a free gift, a gift we cannot earn, but our destiny is of our own making and is determined by our attitudes, choices, and behavior. Sacred Scripture is filled with stories about the two paths: the path of the wicked and the path of the righteous. And, of all the disappointments that Jesus endured, I'm sure He is filled with the greatest grief over the loss of His children: children lost through misconceptions, indifference, a lack of faith, or a refusal to trust.

Judas was one of God's children - perhaps one of the most enigmatic and fascinating characters in Sacred Scripture. He witnessed a majority of Jesus' miracles,. He heard Jesus preach, and saw many change their lives to follow Him. Jesus, repeatedly tried to save Judas, but Judas remained untouched - focused solely on wealth and potential power. Only after Jesus' crucifixion, did Judas realize the enormity of his self-absorption and betrayal. Coming to Jesus at night, and betraying his Master with a kiss, Jesus' heart must have been filled with grief. Not able to ask forgiveness, not able to forgive himself, and not able to live with what he had done, Judas committed suicide. If only, Judas would have listened. If only he would have heard. If only he had more faith. If only. If only.

And in the Gospel message today, we witness another of Jesus' disappointments, perhaps His greatest disappointment: the indifference and sinfulness of His priests - the betrayal by those chosen to shepherd Israel, by those given the grace to be examples of wisdom and holiness. Yet, focused solely on wealth and political power, they desecrated the Temple and perverted the heart of their covenant with God. Such was Jesus' disappointment that, in anger, He made a whip out of cords to drive out the vendors and money-changers and cleanse the Temple of their irreverence, greed, and perversion of Mosaic law.

Under the law of Moses, every Jew was required to journey to Jerusalem for the Passover. Bringing along their families, the population of Jerusalem would swell to over 2.5 million people during the Feast. Furthermore, every Jew, nineteen years of age and older, was required to pay a Temple Tax. The tax supported general operations, sacrifices, and Temple rituals. The tax itself was one-half shekel, or about two days wages. However, the Temple tax could only be paid in Jewish currency. Pagan currencies were considered unclean; it could be used to pay ordinary debts, but not to repay a debt to God. So, money-changers, approved by Temple officials, would make the exchange. All of this was proper. The money changers had a right to be paid for their services, assuming the fees were reasonable. However, the money-changers became corrupt. With possible kick-backs, the money-changers required the pilgrims to pay another full day's wage just to exchange their currency.

Additionally, each family would bring a pure and spotless animal for the sacrifice, and Temple authorities were appointed to inspect each animal. Again, this is proper and according to Jewish law, for which the inspectors would receive a fee. However, like the money changers, the inspectors also became corrupt. All too often, perfectly acceptable sacrifices were rejected, and the pilgrims were blackmailed into purchasing another animal from the Temple vendors.

The amount of revenue from the sale of animals, kick-backs, and other side-deals cannot be estimated. However, revenue from the Temple Tax alone has been estimated at around $100,000 annually. When the Roman General and politician, Crassus, raided the Temple in 54 BC, he confiscated a portion of the Temple treasury, and took away over 3.5 million dollars. It's hard to estimate what that would be worth today. Needless to say, the Temple officials, scribes and priests, turned the Passover into a very lucrative enterprise.1

Seeing this, it was impossible for Jesus to stand passively by, while His children were treated in this way. It was a rampant and shameless corruption. Jesus, filled with zeal for His Father's house, made a whip out of cords, overturned the tables of the money changers and drove them all out of the Temple. Pilgrims to the Passover, who could ill afford it, were being scammed at an exorbitant rate. And what was worse, it was being done in the name of religion, and perpetrated by the Temple officials and His own priests - those who should be living examples of God's Mercy, those who should be the most holy. Enraged at the depth of their ingratitude and lack of reverence, Jesus cleared the Temple Court shouting, “My house shall be a house of prayer, but you are making it a den of thieves.” 2

However, this is not simply another story of Jesus being disappointed, His aiding the Passover pilgrims, or His righteous anger. Jesus cleanses the Temple by driving out the merchants and money changers, but the hearts of His scribes and priests remain unchanged, and, in fact, even more entrenched and bitter. In a literal sense the gospel story is about selfishness, infidelity to God's laws, and indifference to God's Mercy, but in a spiritual sense it applies to all of us as well.

We have to view ourselves as Temples: tabernacles sanctified and consecrated to the Lord, and protect our spirit and actions from all of society's and Satan's corruption. And with the cleverness of Satan's temptations, attacking us where we are weakest, it's not a simple or easy task. For we, too, know human nature. We know it well. But, Our Lord promises to protect us, if we remain 'on the vine” and keep our hearts fully in His Love.

For me, personally, the gospel reminds me that I should be filled with a fervent reverence for all that is holy. I should have as much righteous indignation over my own sins as those of others. The gospel teaches me that I should take the cords of scripture, prayer, discipleship, and justice, and weave them into a whip to drive out any sinfulness, inequity, or lack of charity in my own soul. I must see every encounter as an opportunity to be an instrument of God's Mercy, and an example of fidelity to my Lord and my brothers and sisters. For, in my heart of hearts, I never want to be a disappointment, or a cause of grief, to My Lord and God.