The fifth Sunday of Lent, is often called Forgiveness Sunday. It's a tradition from monastic life where monks asked for forgiveness from each other for acting with any lack of courtesy or respect.

Recognizing the need for forgiveness is especially important today since courtesy and respect seem to be values that are quickly disappearing in our society. Much of our news and entertainment, for example, is based on selling discord and anger. And acts of disrespect, contempt, and even violence toward one another have almost become epidemic. Public discourse is filled with vulgarity, vindictiveness, and slander. Public ridicule has reached the level of a sport, while acts of forgiveness, mercy, and reconciliation are almost forgotten.

Current attitudes and life styles, in one way or another, are highly egocentric. The self is all that matters. Everyone else exists, not to be loved, respected, valued, and nurtured, but to be used for personal objectives and pleasure. What I want, and what I need, is all that matters, and differing opinions must be eradicated. 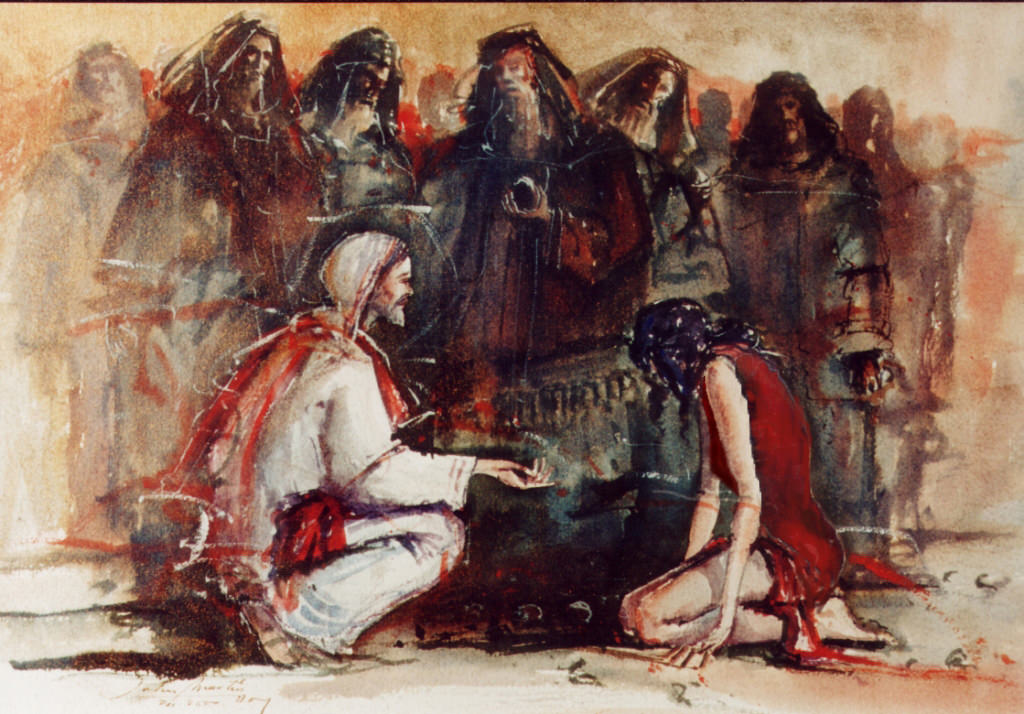 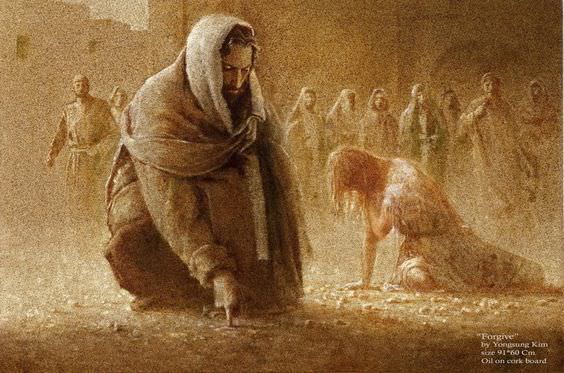 Such is the case in the gospel story of the 'Woman Caught in Adultery'. It is a beautiful story on multiple levels. In the reading the scribes and Pharisees brought a woman to Jesus for judgment. The woman has been caught in the act of adultery. Under Mosaic law, the act of adultery was punishable by stoning. This woman was pulled out of bed, half-dressed, and dragged to the temple. She was embarrassed and frightened. She was denied due process of law, or even an advocate for her defense. And, her sin was made very, very public.

Every time this story is told the question arises, where is the man in all this? Why wasn't his sin made public? Why was he allowed to escape? Why wasn't he dragged to the temple and publicly humiliated?

Scripture doesn't tell us the answer to these questions. We can only speculate that the man had some standing in the community and was protected by friends in high places. Or, perhaps, he wasn't as useful in the Pharisees chess game to condemn Jesus. Condemning the woman was far easier, and forcing Jesus to condemn a woman would have had a much more powerful psychological and political impact

We see this same tactic in our times where those opposed to Christian values parade a multitude of sympathetic victims into the courts, and before the press, to advance their cause.

Adultery is a very serious sin, however, that was not the real issue here. The Pharisees had no interest in the woman. They were not interested in justice. She was just a convenient pawn in their game. What the Pharisees seized upon was an opportunity to discredit Jesus, to strip away His followers, and condemn Him to death. “And, here was their opportunity. Here they thought they [could] impale [Jesus] inescapably on the horns of a dilemma.”1 Such are the tactics of Satan, who uses trickery, controversy, and scandal to separate us from God.

So, the Pharisees brought the woman to Jesus and made her stand surrounded by the crowd. If Jesus said the woman should be stoned, He would no longer be a credible spokesman for God's Love and Mercy, and He would never again be called a friend of sinners. And, it would bring about a direct collision with Roman law, because Jews were prohibited from passing or carrying out a death sentence. On the other hand, if Jesus said she should be pardoned, He would be accused of opposing the law of Moses, and even of condoning adultery.

The Pharisees were the religious and legal scholars of Israel. They did not need Jesus to adjudicate the case. Rabbis were consulted only when there was some ambiguity in the law. Here the ambiguity was that stoning her was contrary to Roman law, and the Pharisees were not about to challenge Roman law. So, they wanted to use Jesus as their scape goat.

From this, it is clear how the Pharisees understood their role and the law. It was their role to make a decision, to issue a judgment, and their judgments were characteristically critical and punitive. That authority, that the law, should express compassion and sympathy seldom entered their minds.

The Pharisees judged, condemned, and sentenced the woman, instantaneously. No one has the right to pass judgment on another without fully evaluating the circumstances. And even then, while rulings by the proper authorities are necessary, judgments are the prerogative of the Lord. Thus, our first response towards our neighbor, even one seemingly guilty, should always be one of compassion.

The Scripture scholar William Barclay notes, “One of the most common faults in life is that so many of us demand standards from others that we never even try to meet ourselves; and so many of us condemn faults in others which are glaringly obvious in our own lives. The qualification for judging is not knowledge - we all possess knowledge. No, the qualification for judging is the achievement of goodness— and none of us are perfect in goodness”2

In this case the woman's guilt was never questioned. It was not questioned by the scribes, the Pharisees, the crowd, or even by Jesus. She was caught in the act. Her true guilt, or innocence, may have been a much more complicated matter, but the circumstances of her sin is not the central issue in the story.

So, the Pharisees said, “Teacher, this woman was caught in the very act of committing adultery. Now in the law, Moses commanded us to stone such women. So what do you say?”3

Jesus would not be pressured into a decision. At this point He stooped down and began to write on the ground. What was Jesus doing? What was He writing? Scholars have various viewpoints, however one of the most persuasive is that Jesus paused for a period of time and then began to write on the ground the sins of the Pharisees and those with stones ready in their hands.

Then Jesus said, “Let the one among you who is without sin be the first to throw a stone at her.”4 Then, He bent down again and wrote on the ground calling to mind the sins of those who had already condemned the woman.

The Pharisees were looking for a way to condemn Jesus. They wanted to protect their status, and authority. But, they also wanted to free themselves. They were caught in a trap between Roman law and the Law of Moses. And here was their opportunity to free themselves and put the blame on Jesus. In their view, Jesus had to be silenced, and putting this woman to death was a insignificant concern in accomplishing their objectives. Does this remind you of events in our time? Does it remind you of people who are thrown on the sacrificial altars of power, greed, and politics?

But, Jesus was even merciful with the Pharisees. He softened their wrath by bringing their own sins into the picture. He said, “Let the one among you who is without sin be the first to throw a stone.”6 Jesus did not fall into their trap,

In their haste to condemn Jesus, the Pharisees forgot the requirements of the law, and brought about their own defeat. Now, in order to stone her, they had to violate Roman law, throw the first stone, and publicly declare themselves to be without sin. So, one by one, embarrassed and defeated, they dropped their stones and went away

Then Jesus said to the woman, “Has no one condemned you?” She replied, “No one, sir.” Then Jesus said, “Neither do I condemn you. Go, and sin no more.”7

It is unlikely that the scribes and the Pharisees even knew this woman’s name. To them she was nothing – just an opportunity they could use for their political purposes. Again, does this sound familiar?

We must remember that the first objective of the law must be to reclaim the offender. God uses His authority to 'love men into goodness'. Likewise, we must use what responsibility we have to understand, and at least to try to mend the broken hearts and broken lives of others. Jesus did not condemn the woman. He called her back to a righteous life. He told her to 'go and sin no more'.

How different is the justice of God! Man sees what is - an adulterous woman - and condemns. God sees what can be - a woman who could become a saint.

God uses His authority to 'love us into goodness'. He calls us to a righteous life. He says to us, to you and me, “Neither do I condemn you. Go, and sin no more.”8 Jesus sets an example before us. As disciples, we need to use our knowledge, relationships, and compassion to reclaim sinners for Christ.

So, what do we do? Do we condemn? Do we throw stones? Or, do we love our 'neighbor into goodness'. If we choose the latter, then, maybe, just maybe, we can go forth together in peace and 'sin no more'.