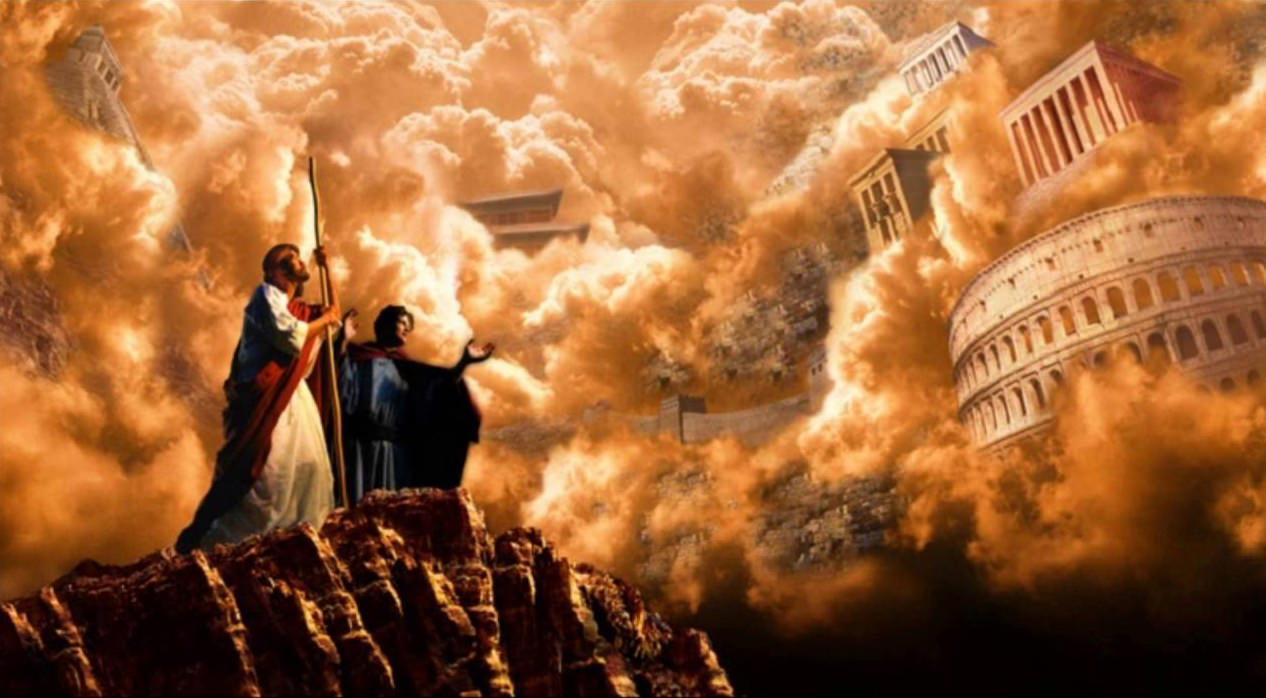 Some sins are more serious than others. Mortal sins, for example, are more serious than venial sins. Mortal sins deal with very serious, or in theological language, grave matters. Since commission of these sins requires our consent, they sever our communion with God. Venial sins deal with less serious matters, or they are committed in ignorance, without sufficient knowledge or deliberation. Likewise, the reparation to God's Justice varies with the nature and seriousness of the offense. But, in another sense, all sins are the same, as they all have the same cause.

We face this temptation in our lives when we use our resources strictly for our own pleasure and ignore the needs and suffering of others. We submit to this temptation when we do not use our God given talents and abilities to build up the the Church, the community, and the Body of Christ.

In the second temptation Satan attempts to trap Jesus. Jesus is challenged to throw Himself off the Temple. Satan dares Jesus to act recklessly. If He complies, He commits the sin of presumption and puts God to the test. If He refuses, He can be accused of lacking faith. Jesus will face such traps over and over again. He was tempted to violate Roman Law when asked, “Is it lawful to pay the census tax to Caesar or not?”X And another trap was set when the Temple Officials brought Him the woman caught in adultery.

In the third temptation Jesus is shown all the kingdoms of the world. All this will be His if He makes an act of submission to Satan. The temptation is to be king, to wield personal, political, social, and economic power; to dictate to others; and abandon the virtues of humility, fidelity, and obedience. In offering Jesus all the kingdoms of the world, Satan, the Father of Lies, tries to claim what is not his. Jesus is careful to ensure that this temptation does not take root, as the people want to proclaim Jesus a political king. Even hanging on the Cross, Jesus' refusal to assume personal power is mocked, as Satan hangs a sign on the Cross which reads, “The King of the Jews.”3

We are constantly tempted to seize control, to criticize and defy legitimate authority, when we insist on our own point of view, or use our influence for personal gain. How many baptized Catholics, for example, leave the Church because they insist on artificial birth control, divorce and remarry outside the Church, engage in non-marital sexual relationships, or refuse to recognize Christ's Real Presence in the Holy Eucharist. But, as tempting as it is to prevail in our own opinions, yielding to temptation never brings true or lasting happiness. No matter how apparently logical or attractive, yielding to temptation is always a miserable deception. It allows Satan to gain a foothold in our souls, and brings tremendous sorrow and destruction in our lives and the lives of others.

All three of these temptations serve one purpose. And that is for Jesus to put Himself first, to rebel against His Father's Will, and to abandon His Mission. And that brings us back to the nature of sin.

All sin is a violation of the First Commandment, “You shall not have other gods besides Me.”4 All sin, whether it be envy, greed, lust, sloth, or even refusing to honor the Sabbath, involves putting ourselves first. Numerous Church Fathers have spoken of this as the 'Sin of Idolatry', where our desires supplant the obedience and the love that is due to God alone. And that is the true nature of all sin: it is putting ourselves first.

Even though Satan tried to tempt Jesus, we know theologically that Jesus was incapable of sin. And when we enter Heaven, we too will be incapable of sin. In Heaven, our souls will be the complete master of our bodies. There will be no sin: no envy, no lust, no greed, no hatred. If someone is at a higher level in Heaven than we are, we will rejoice at their sanctity. How different that is from our petty jealousies on earth. In Heaven we will live fully in God's Divine Will. Is it any wonder that Jesus speaks so lovingly about what He has prepared for us, and welcoming us into the joy of His Kingdom

So, the true nature, the true cause, of all sin is putting ourselves first. Unfortunately, while on earth we are not immune to sin. We have to constantly resist our sinful desires to put ourselves first. So, if you haven't firmly decided on a Lenten Penance, or even if you have, you may want to consider spending these next 40 days putting God and others first. It would be an appropriate, and very rewarding penance, that may bring healing to many, and bring a little bit of Heaven to Earth.