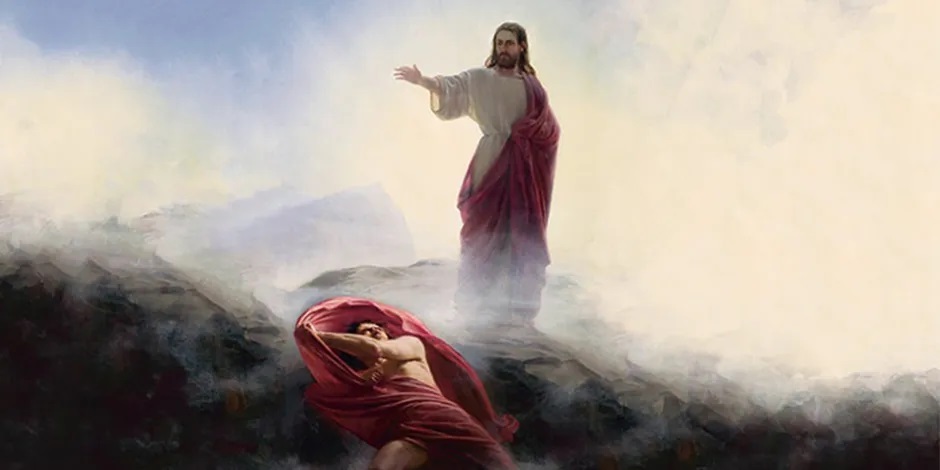 Temptations of Christ
Image by: Unknown 1

The Temptations of Christ

It's always interesting to hear the vast array of ideas and interpretations of Sacred Scripture. Some are enlightening, presenting new perspectives in applying the Scriptures to our daily lives. Others, however, may be off-base from a theological, or even a practical, point of view. Today's gospel reading is one of those passages that is often misinterpreted.

One common misunderstanding is that Jesus must have been tempted by Satan's enticements, otherwise the temptations would have no purpose. Another point of view suggests the temptations were directed and possibly effective against Jesus' Human Nature. The arguments may seem logical, but they reflect a strictly human perspective and ignore the Divine Nature of Christ.

The Nature of Temptation

To understand these passage, there are three concepts that we need to address.

The first of these is temptation itself, of which there are two types: external and internal. An external temptation comes from an external source: one that does not originate from within our minds or hearts. An internal temptation, regardless of its source, is one that has been internalized, that is: we have entertained the idea and thought of acting on it. A temptation, external or internal, in itself, is not sinful. To become sinful, we must act on it in some manner.

The Impeccability of Christ

The second concept stems from the dogmatic statements on the 'Impeccability of Christ'. These are 'de fide' statements, which means they are an essential part of Catholic faith and beliefs to the contrary are heretical. In short, we can say that all perfection is found in Christ, that Christ is infinite in those perfections, and that these perfections are unchangeable. From this, the Church teaches that Christ was, and is, incapable of sin.

The third concept involves divine nature and human nature. There are only four people, Adam, Eve, Mary, and Jesus, who were born free of Original Sin. Adam and Eve were tempted by Satan: an external temptation. However, they internalized that temptation, acted on it, and committed the sins of disobedience. Through their sin all mankind, except Mary and Jesus, inherited a damaged human nature, and are susceptible to temptation. The tendency to sin is known as 'concupiscence'.

Mary, was born free of original sin by the Immaculate Conception of Her Mother, St. Anne. Through Mary's cooperation with God's grace, and the protection of the Holy Spirit, she lived a life free of sin. Sinfulness was not in her nature.

Because Jesus was parented by the Holy Spirit and by the Virgin Mary, He has a fully Divine Nature and a fully Human Nature. However, the two nature are essentially one and the same, since His Human Nature is always subordinate to His Divine Nature, and there is never any discord between them. This unity is known as the 'hypostatic union'.

Due to the unity of Jesus' two natures, and His absolute perfection, the temptations Satan placed before Christ remained external and ineffective. They were not, and could not be, internalized. As is said in the Book of James, “God is not subject to temptation”. 1 Thus the Church declares as dogma that Jesus is incapable of sin. This incapability stems not from a lack of power. We all know that Jesus is all-powerful. Rather, it comes because sin is not in His Nature.

Each temptation in this reading begins in saying, “If you are the Son of God”. From this, we may assume that Satan was unsure of Jesus' identity, and that Satan was using this phrase as a taunt to provoke Jesus. In either case, Satan's goal is to discredit Jesus, to cause Jesus to abandon His Mission, or to persuade Jesus to circumvent the Will of His Father. If Satan is successful, that would prove that Jesus is not Divine, that He is not the Messiah, and Satan can claim another victim.

However, because Jesus did not, and could not, succumb to these temptations, this passage, these temptations, and this encounter with Satan, are really meant for us. They serve to inform us, so we can recognize and protect ourselves from sin. Everything Jesus did, and continues to do, is for us.

In terms of moral theology, Satan's temptations fall into a class called the 'root temptations'. They all have a common thread: and that is a myopic view of the world where we see ourselves as the center of the universe - deserving all pleasure, all comfort, protection, power, possessions, and glory.

Satan normally comes at a time when we are weakest, when we are most vulnerable. Jesus has fasted for forty days and was hungry. Satan tries to tempt Jesus into turning a stone into bread. However, the real temptation is for Jesus to use His Divine Power for His Own benefit.

Likewise for us, this temptation discerns what is in our hearts. Do our creature comforts have a higher priority than our spiritual lives? Do our personal interests have a higher priority that attending Mass? Does how we spend our time preclude our time for prayer? Do we use the gifts and talents that God has given us strictly for our own benefit, or do we use them in service to God?

The second temptation deals with the love of power and possessions – idols of arrogance. Satan now promises to give Jesus all the allurements of the world. Like a common con-man Satan promises what is not his to give. But there's another catch, Jesus must bow down and worship Satan.

We, often, think that power and money will solve all our problems. We are often tempted to put our trust in the material, the physical, in political figures, and in the process fall victim to false gods. We are tempted to bow down, to abandon our mission, and take the easy road. There are many types of slavery, but the most devastating is the destruction of our spiritual lives. Sacred Scripture makes this very clear. Jesus says, “What profit is there for one to gain the whole world and forfeit his life?” 2

The third temptation deals with a love of recognition, a love of glory, popularity and praise, and the approval of other people. These are the idols of vanity. The sins of pride and vanity surface in many subtle and obvious forms.

We all want to feel we are worthwhile and valuable. That's a normal human need. The sin of pride occurs when we seek to exalt ourselves, or our accomplishments, especially at the expense of others. The sin of vanity differs from the sin of pride. Vanity, also called vain glory, comes in a inordinate desire for recognition for something to which we have no rightful claim.

This third temptation takes place on the parapet of the temple. From the temple, Jesus can see where He will be Crucified. Satan takes the words of the Torah, which are not his, to taunt Jesus. He prods Jesus to perform a miracle for show. But, Jesus does not succumb to Satan's trickery. Instead He quotes Scripture, “You shall not put the Lord, your God, to the test.” 3

In this Jesus rebukes Satan, and proves that Satan can be defeated by an authentic conviction of faith. Jesus will not force His Father's Hand. He will not act in pride. Instead of seeking glory, Jesus humbly submits Himself to be hung, like a criminal, on the Cross.

Meaning of these temptations

So, how are we to understand these temptations? And, what purpose do they serve? There are several lines of thought.

The first is that Satan didn't really know who this Jesus was, and the temptations were aimed at determining His identity. If Satan could cause Jesus to stumble, then that would prove that Jesus was not Divine, and Satan could claim another victim. But through Christ's victory, it was Satan's character that was revealed, and the temptations served to testify that Jesus is the Son of God.

A second line of thought is: since the days of Adam and Eve, man has struggled with temptation. No one, prior to the Virgin Mary, has managed a sinless life. In Mary of Agreda's biography of Our Blessed Mother, called The City of God, Our Blessed Mother says Christ allowed these temptations so when we face temptation, we would find Satan already defeated. Knowing that Satan can be defeated gives us the courage and confidence to persevere in difficult times.

A third line of thought relates to our role in Christ's mission. Father John Hardon, the noted theologian, says, “Since the Son of God allowed Himself to be tempted at the beginning of His public ministry, what should we expect? Nothing less than to be tempted in our own lives by the spirit of evil whose purpose is to lead us into sin.”4 Satan seeks to destroy us. Knowledge of these temptations prepares us for the evils we will all face, and how we can respond to them.

And finally, every temptation is a seduction. We are constantly being seduced by the allurements of the world. We are all tempted in some way by power, status, convenience, excessive material goods, a desire for recognition, or a desire for glory. In each of these, and in all sin, when we seek to elevate ourselves, we, in effect, bow down to Satan, and adore what is not divine.

The stakes of these temptations are extremely high. If Satan can seduce us, then our salvation is lost. How great was the damage done to all mankind by that original sin, and by our own sins. Can we counteract the damage done? Yes, if we always maintain our focus on Christ: living with Him, through Him, in Him, and for Him. Yes, if we are motivate only by a life in Christ, and seek to become saints. Oh, what a happy day it will be when sin is no longer a part of our nature.

But when we put God in second or third place, we end up becoming slaves of selfishness, and not the missionaries of clarity and mercy that we are called to be. C. S. Lewis once said, “Humility is not thinking less of yourself, it's thinking of yourself less.”5 So, put God first in all things. Satan is not invincible. Reinforce your faith, put on the armor of Christ, raise the Cross of Victory, and trust and follow Christ in all things. Jesus, I trust in You!