Adam and Eve were given permission to eat from any of the trees in the garden, except one. Trust me, this was not a two-tree garden. They had lots of choices, and there was only one tree they had to abstain from. Imagine going to a buffet restaurant, and being told that you may eat from anything from the buffet, except one thing. Would you be able to say no to that one thing, or is it going to be a source of temptation?

Adam and Eve failed in their temptation because they did not include God in their discussion. God was talked about, but not invited into the conversation. A decision was made without including God. That is almost always a recipe for disaster. It almost always leads to sin. Every sin somehow excludes God, and His love. 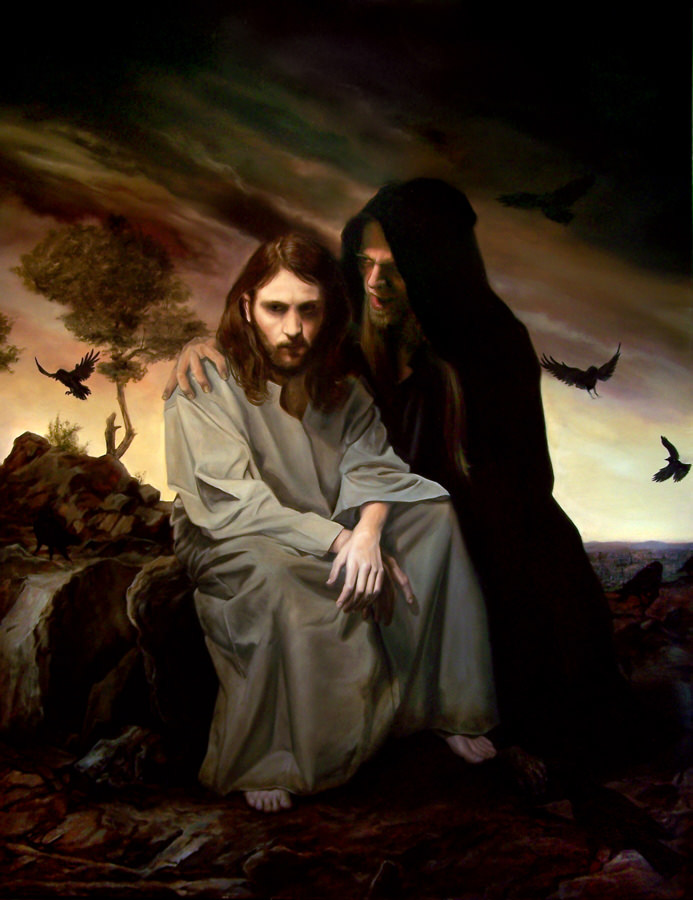 Temptation of Christ
by Eric Armusik1

After his baptism Jesus was led into the desert to be tempted. The desert, the opposite image of a garden, becomes a place of reconciliation and healing.

The first temptation was for Jesus to use his miraculous powers for himself; in this case, to feed himself. As we know, he does use those powers later. However, it was not for himself, but to feed 5000 people when he multiplied the fish and the loaves. We must always remember that we are tempted through our gifts. It is a fact that where we are strongest is where we need to be on the watch for temptation.

One of the guys responsible for first bringing cocaine to California was first involved in smuggling marijuana. He was caught, but jumped bail. One night while on the run from the law, he visited his parents at their home. His dad asked him to stop and to pursue some other path in his life. He told his dad, “I don’t think you understand, I’m really good at this.” His dad responded, “You could have been good at anything.” While they were talking his mom called the police, and off he went to jail. In jail he met a man that had connections to cocaine. The two became partners, and his life spiraled down into worse and worse sin because he used his gifts not for good, but for evil.

It is also a temptation to see God as a divine soda machine. We put money into a soda machine, and we get a soda. Likewise, we think that since we have asked God for something, then we should get what we want. A soda machine gives us what we want when we put the money in, and so sometimes we think God should be like that. We said the prayer, now God should give us what we asked for. When we ask God for something in prayer, we should always conclude that prayer the way Jesus concluded his prayer in the Garden of Gethsemane. Remember, Jesus concluded that prayer by saying, but not my will, but your will be done. It is okay to ask God for things in our prayer. However, we always leave it up to God’s will.

The third temptation is to have success, power and pleasure without God. Can we pursue our goals by any means possible? Is it okay for athletes to use performance enhancing drugs? Some people live by the philosophy that, if you can get away with it, it’s not cheating, or if you’re not cheating, you’re not trying. Whatever happened to excelling in the area of virtue? Those who are honest and good at what they do will always have plenty of work. A plumber or mechanic who is honest and good at what they do will be very successful.

We have begun Lent, at time modeled on Jesus’ 40 days in the desert. For him it was a time of prayer and fasting. Thus, it should be the same for us. Lent should be a time when we give something up that is difficult. It should be hard. It should tempt us. And when we are tempted we go to God in prayer, asking Jesus to strengthen us against this temptation. Thus, fasting should lead us to prayer. Unlike Adam and Eve who didn’t invite God in to their life when they were being tempted, we have the opportunity during Lent to practice turning to God in prayer when we are tempted to have or do what we have given up for Lent. You see, during Lent we practice inviting God into our lives when we are tempted so that during the rest of the year we can live what we have practiced during Lent. Amen?

In addition, don’t forget to attach intentions to what you have given up for Lent so that you turn your sacrifice into a powerful prayer and an act of love. We learned that from the cross. Jesus sacrificed his life on the cross for the intention of saving us from our sins. Thus, it was the greatest act of love of all time.

The Gospel for the First Sunday of Lent is always the temptation of Jesus by the devil. We have all of Lent ahead of us. On Easter Sunday we will celebrate the resurrection of our Lord. At mass that day we will also renew our baptismal vows and renounce sin and Satan. Let’s spend Lent inviting God into our lives when we are tempted, and saying no to temptation, so that on Easter Sunday we can boldly renounce sin and Satan. Amen?1