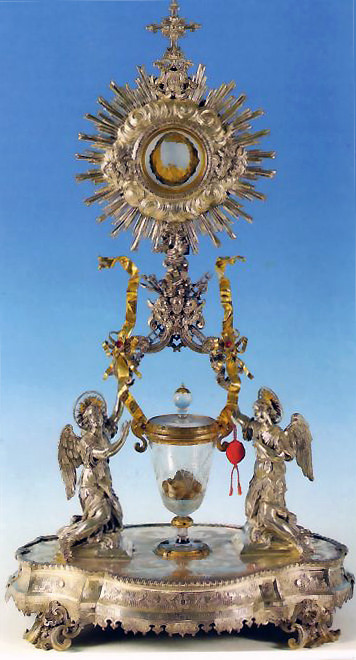 The Eucharistic Miracle of Lanciano

The miracle of Lanciano is the first, and many believe the greatest, Eucharistic Miracle of the Catholic Church. Keep in mind that strictly speaking a miracle is an extraordinary event produced directly by God or by His will and command through an agent, such as a saint. The miracle occurs in a religious context and is a clear sign of supernatural, divine intervention. Most importantly, the miracle arouses within the spectator or recipient a greater conviction of faith in God.

With this in mind, we now turn to the miracle in question which occurred in the 700s in the town of Lanciano, then known as Anxanum, an ancient Roman city, located southeast of Rome. There the monks of St. Basil had established a monastery under the patronage of St. Longinus, traditionally believed to be the centurion at the crucifixion who proclaimed, Truly, this was the Son of God (Mt 27:54) and pierced the side of our Lord with his lance (Jn 19:34).

One day, a certain monk was offering the Holy Sacrifice of the Mass. Although we do not know his identity, an ancient document described him as …versed in the sciences of the world but ignorant in that of God. Apparently, he had been plagued by doubts about transubstantiation: he agonized over whether the bread and wine changed substantially into the Body and Blood of our Lord at the words of consecration, and whether our Lord was truly present in the Holy Eucharist.

This time, when the monk pronounced the words of consecration, the host was miraculously changed into flesh and the wine into blood. The monk was awestruck. Weeping joyously, he regained his composure. He called the congregation around the altar and said, O fortunate witnesses, to whom the Blessed God, to confound my unbelief, has wished to reveal Himself visible to our eyes! Come, brethren, and marvel at our God, so close to us. Behold the Flesh and Blood of our Most Beloved Christ. Those who witnessed the miracle soon spread the news throughout the surrounding area.

Shortly after the occurrence, the Blood coagulated into five globules of different sizes, but the Flesh remained the same. The archbishop ordered an investigation. The testimony of witnesses was recorded. The Flesh and Blood appeared to be human flesh and blood. The archbishop sent a scale for the weighing of the globules: each individual globule weighed the same as the other individual ones (although different in size) or as all five together or as any other combination. Eventually, the Flesh and the globules of Blood were placed in a special ivory reliquary, but not hermetically sealed. Church authorities certified the miracle although the original document was lost some time in the 16th century.

Over the centuries, different religious orders have had custody of the Church and the relics: originally the Basilians until 1176, followed by the Benedictines until 1252, and since then by the Franciscans. In 1258, the Franciscans built a new Church under the patronage of St. Francis of Assisi to replace the decaying Church of St. Longinus. The relics to this day remain at this basilica under the care of the Franciscans.

Since the first basic investigation, the Church has permitted other studies on the relics. In 1574, Msgr. Rodrigues once again weighed the five globules in the presence of witnesses and arrived at the same conclusion. Remember though that eight centuries had passed and no visible sign of deterioration had taken place.

In 1713, the original ivory reliquary was replaced by one of silver and crystal. The Flesh is displayed in a monstrance just like the Sacred Host, and the globules of Blood are in a crystal chalice, which some believe is the actual chalice used by the monk for Mass.

The most thorough study occurred in 1970-71. Pope Paul VI permitted a series of scientific studies on the precious relics to verify their nature. Dr. Odoardo Linoli, professor of anatomy and pathological histology, chemistry and clinical microscopy, and head physician of the hospital of Arezzo, conducted the study. He was assisted by Dr. Ruggero Bertelli, professor emeritus of human anatomy at the University of Siena. The analyses were performed in accord with scientific standards and documented, and Dr. Bertelli independently corroborated Dr. Linolis findings. In 1981, using more advanced medical technology, Dr. Linoli conducted a second histological study; he not only confirmed the findings but also gathered new information.

The major findings from this research include the following: The Flesh, yellow-brown in color, has the structure of the myocardium (heart wall) and the endocardium, the membrane of fibrous-elastic tissue lining all the cardiac cavities. These have the same appearance as in the human heart. No traces of preservatives were found in the elements.

The blood was also of human origin with the type AB. Proteins in the clotted Blood were normally fractioned with the same percentage ratio as those found in the sero-proteic make-up of normal, fresh human blood. The blood contained these minerals: chlorides, phosphorus, magnesium, potassium, sodium, and calcium.

Moreover, the doctors both concluded that only the skill of a trained pathologist could have obtained such a sample, a tangential cut of the heart a round cut, thick on the outer edges and lessening gradually and uniformly to the central area.