VATICAN CITY (CNS) — As Cardinal Jorge Bergoglio of Buenos Aires, the future pope dragged the hidden problem of human slavery into broad daylight. He held annual open-air Masses in the city’s Constitution Square for and with victims of human trafficking — many of them children accompanied by their enormous burlap sacks stuffed with recyclable cardboard.

In his homilies, he denounced their oppressors, as he did in 2010 when he condemned the “great mafia of very elegant people” — the traffickers and those who profit from the illegal trade — whose “money is stained with blood.”

Now, as leader of the universal church, Pope Francis is dragging the blight of human trafficking onto the global stage, calling it “a crime against humanity” and decrying the world’s indifference.

The United Nations estimates 2.4 million people are trafficked at any given time and their exploitation generates $32 billion in annual profits for criminals. The Global Slavery Index estimates nearly 30 million people worldwide are living in slave-like conditions.

And as a respected world leader, the pope also carries some heft with the rest of the world and inspires many people of goodwill to follow his call, he said.

“If I had asked 20 police chiefs, (some) from Thailand and Australia, to travel to London” to form a partnership with the church, they may have come, he said. But “if the pope shows his interest, people will be interested. That leadership is so powerful.”

The 20 police chiefs Hogan-Howe was talking about formed the Santa Marta Group April 10; endorsed by the pope, it is an international group of senior law enforcement chiefs who have pledged to work with the church to stamp out trafficking and give victims the care they need.

Pope Francis does not just talk to world leaders and diplomats about the issue. He has swung the Vatican-based think tanks into action.

Not long after his March 2013 election, he asked the chancellor of the pontifical academies of sciences and of the social sciences to work on the problem of human trafficking and modern-day slavery.

Just a few months later, Bishop Marcelo Sanchez Sorondo, the Buenos Aires-born chancellor of the Pontifical Academy of Sciences, hosted the first of three subsequent international gatherings on trafficking and the marginalized.

He said the pope’s focus on the issue is driven by a deep desire to be close to those who suffer, recognizing that Christ himself can be found in their wounds.

“He really has always had this ‘nose for’ the people of the Beatitudes,” those who are poor in spirit, the meek, the persecuted and so on, he said. “This is his instinct.”

He said the pope “always cites” the “judgment of the nations” from St. Matthew’s Gospel to underline the dire consequences that await those who fail to help those who are hurting.

Bishop Sanchez said the pope’s arguments to end slave labor appeal not only to people of faith, but also to people who believe only in the bottom line.

In a speech to new ambassadors to the Vatican last December, the pope said, “the increasingly aggressive crime” of trafficking and slave labor “threatens not only individuals, but the basic values of society and of international security and justice, to say nothing of the economy, and the fabric of the family and our coexistence.”

Bishop Sanchez said economists who support the pope’s position argue that living wages for workers pump money back into the economy, stimulating business and increasing government revenues through taxes.

The pope also is aware of the legal loopholes, the bishop said, and the need for tough laws clearly defining human trafficking and slave labor.

The pope has repeatedly called trafficking “a crime against humanity” — not because it’s a headline-grabbing catch-phrase, but because it has very real and concrete legal implications, he said.

“The pope would like to put human trafficking among the crimes against humanity” because it represents a systemic and serious attack on human dignity and “because there would be no statute of limitations in any country” that is party to the United Nations’ convention against statutory limitations, the bishop said.

But the pope knows that ultimately converting hearts and minds is what will determine whether Catholics, economists, businesses, police and politicians take action.

“Humanity still hasn’t learned how to cry, how to lament. We need many tears in order to understand the dimension of this drama,” the pope told a reporter at the end of the trafficking conference April 10.

Selfishness and hard heartedness are the enduring legacy of Cain’s cynical response after his brother’s murder: “Am I my brother’s keeper?” — a verse in Genesis the pope often cites to condemn the world’s indifference.

Buenos Aires is “anesthetized,” he said in his 2011 homily in Constitution Square; people are numbing themselves with daily doses of “sweet deals” and bribes — “an anesthesia that puts consciences to sleep.”

Perhaps in an effort to snap them out of it, the future pope often yelled “when he referred to the trade and trafficking of human beings,” said Alicia Barrios, an Argentine journalist who covered the future pope for nearly two decades in Buenos Aires.

He never stayed silent, she wrote in her book, “My Friend Father Jorge,” and rallied others to scream out, too.

“Cry out full-throated,” like a trumpet blast, he said at his 2009 Mass for trafficking victims. “Rub it in the face of all those who invented this infernal machine of exclusion, this infernal machine that disposes of people, and let’s curse their conduct and ask God to convert their hearts.”1 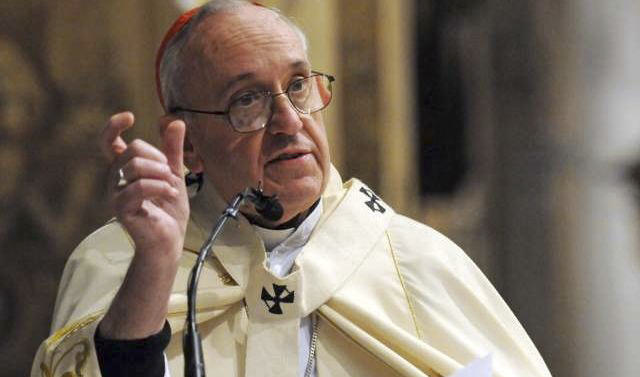 Pope Francis wants action against modern forms of slavery including forced labour and prostitution, the Vatican said Monday after a meeting of experts called by the pontiff to debate the problem.

Dozens of academics, doctors and clerics were hosted by the Vatican to discuss issues close to the pope's heart, including the struggle against organ trafficking and people smuggling.

"Some experts believe human trafficking will overtake drug and arms trafficking in a decade, becoming the most lucrative criminal activity in the world," Marcelo Sanchez Sorondo, chancellor of the Pontifical Academy of Sciences, told reporters.

Sorondo said the pope was heavily invested in a subject he knows well from his years in Latin America and had even invited two experts on human trafficking that he knows from Buenos Aires.

Participants said one of the worst and most worrying forms of slavery in Latin America is the use of children and adolescents as drug dealers.

Jose Maria Simon Castellvi, head of the International Federation of Catholic Medical Associations, also stressed the importance of "zero tolerance" against prostitution saying it was linked to drugs, mafia violence and tax fraud.2