The vast majority of Americans (77% of all adults) continue to identify with some religious faith. And this religiously affiliated population – comprising a wide variety of Protestants as well as Catholics, Jews, Mormons, Muslims, Buddhists, Hindus and adherents of other faith traditions – is, on the whole, just as religiously committed today as when the study was first conducted in 2007. Fully two-thirds of religiously affiliated adults say they pray every day and that religion is very important to them, and roughly six-in-ten say they attend religious services at least once or twice a month; those numbers have changed little, if at all, in recent years. And nearly all religiously affiliated people in the survey (97%) continue to believe in God, though a declining share express this belief with absolute certainty (74% in 2014, down from 79% in 2007).

The study also suggests that in some ways Americans are becoming more spiritual. About six-in-ten adults now say they regularly feel a deep sense of “spiritual peace and well-being,” up 7 percentage points since 2007. And 46% of Americans say they experience a deep sense of “wonder about the universe” at least once a week, also up 7 points over the same period.1 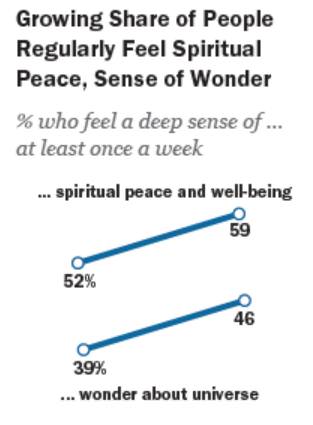 Webmaster's Note: It is truly remarkable that in these times of economic depression, religious wars, gang violence, and social unrest that those who are religious report experiencing a greater peace than in previous years.