The relationship of religion and politics in the U.S. is not fixed in stone. The Landscape Study shows, for example, that nearly all major religious groups have become significantly more accepting of homosexuality in recent years – even groups, such as evangelicals and Mormons, that traditionally have expressed strong opposition to same-sex relationships. Changing attitudes about homosexuality are linked to the same generational forces helping to reshape religious identity and practice in the United States, with Millennials expressing far more acceptance of homosexuality than older adults do. Fully half of Millennials who identify as evangelical Protestants, for instance, now say homosexuality should be accepted by society.

The study also shows that the growth of the “nones” is having a particularly pronounced impact on the Democratic Party coalition. In fact, religious “nones” are now more numerous among Democrats and Democratic-leaning adults than are Catholics, evangelical Protestants, mainline Protestants or members of the historically black Protestant tradition. The religiously unaffiliated also are growing within the GOP, though not as quickly, and they remain far outnumbered by evangelicals and less numerous than Catholics or mainline Protestants within the Republican coalition.1 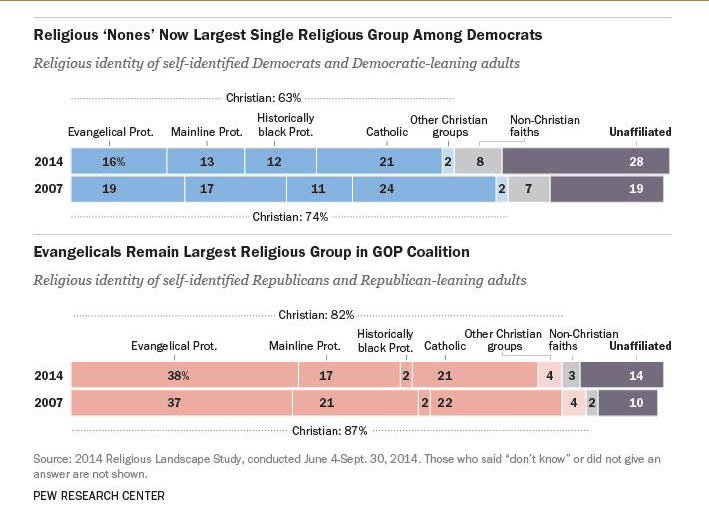