The Vocation and Mission of the Family in the Church and the Modern World,

The Vatican’s synod on the family, which closed Oct. 25, 2015 focused on pastoral challenges involved in family life. In Western secular media the discussion was reduced largely to two issues: Communion for divorced-and-civilly remarried, and Church teaching and pastoral care regarding homosexuality. However, actual topics brought up during meetings were much broader, with synod fathers touching on themes such as domestic violence, violence against women, incest and abuse within families, marriage preparation and pornography.

A closing news conference at the Vatican reported a sense of collegiality among the global bishops. Only two of the 94 paragraphs showed a disparity in the voting, both of them surrounding the topic of pastoral care for divorced and remarried persons. Despite the calls by some for the Church to change its doctrine by allowing divorced and civilly remarried Catholics without an annulment to receive Communion, the synod’s final report upheld current Church teaching and practice on the issue.1 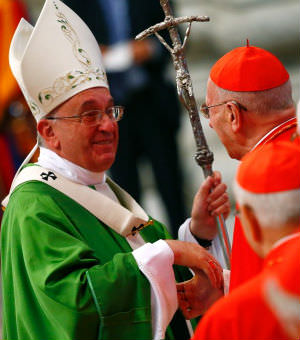