The White Dove of the Desert

San Xavier del Bac is a treasure of southwestern history. An 18th century religious beacon that calls all to experience. It is a historic Spanish Catholic mission located about 10 miles (16 km) south of downtown Tucson, Arizona, on the Tohono O'odham San Xavier Indian Reservation. 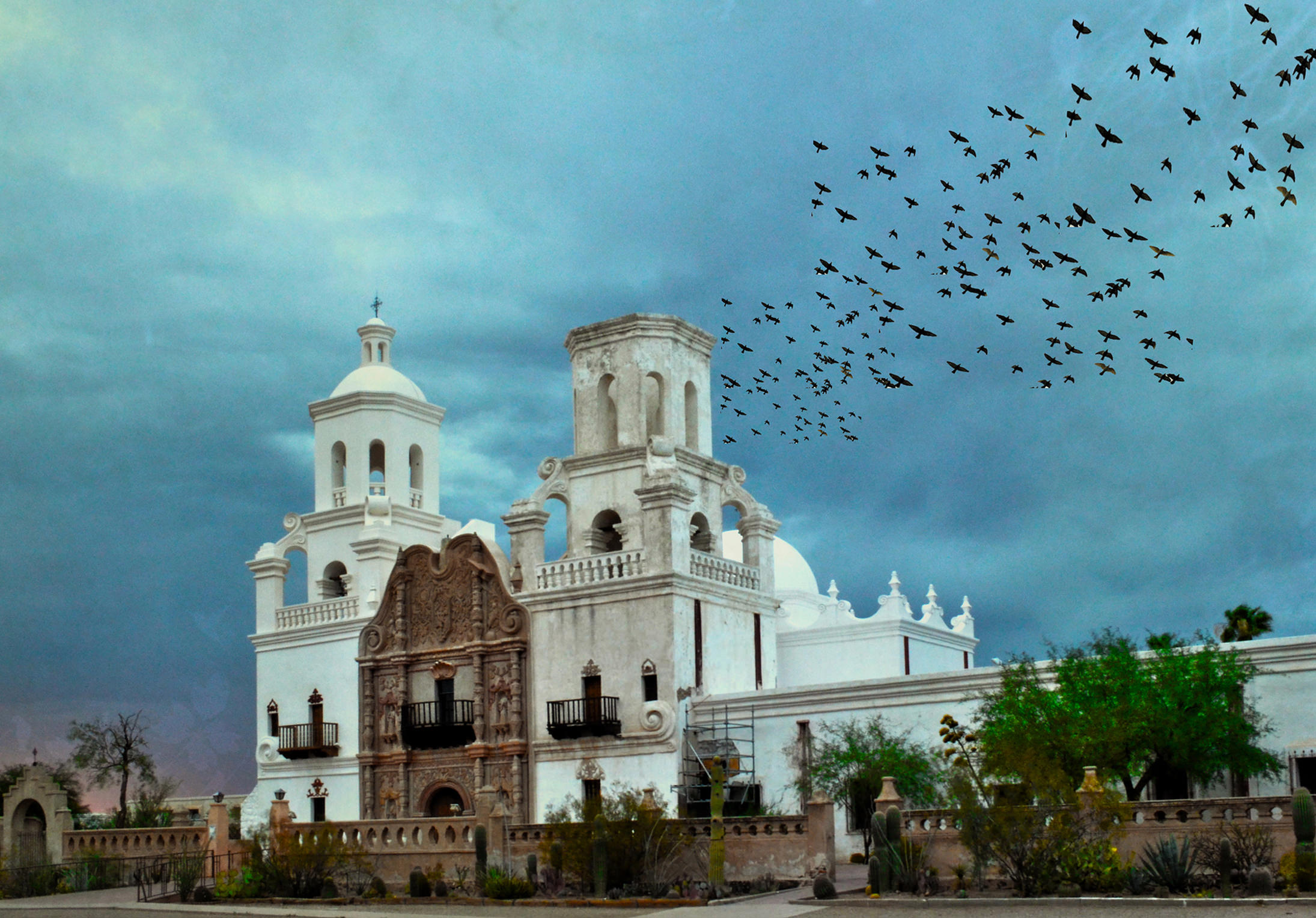 The masterpiece includes the spirit and charisma of its time. San Xavier has been called the “Sistine Chapel of the New World” and in fact, the same Italian artists that worked on the Sistine Chapel also came to San Xavier to help restore the interior to its original brilliance. Its brick walls are six feet thick in some places and is coated with a limestone-based plaster with a formula that includes the juice from prickly pear cactus pads. 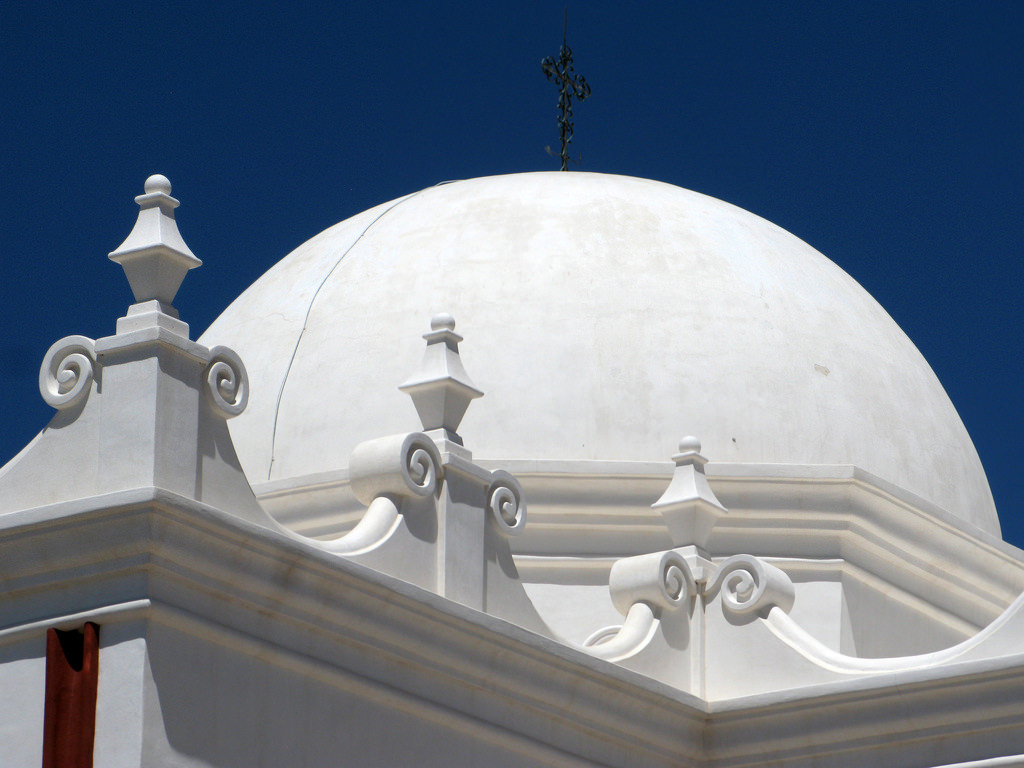 Named for a pioneering Christian missionary and co-founder of the Society of Jesus (Jesuit Order), the Mission is also known as the "place where the water appears," as there were once natural springs in the area. 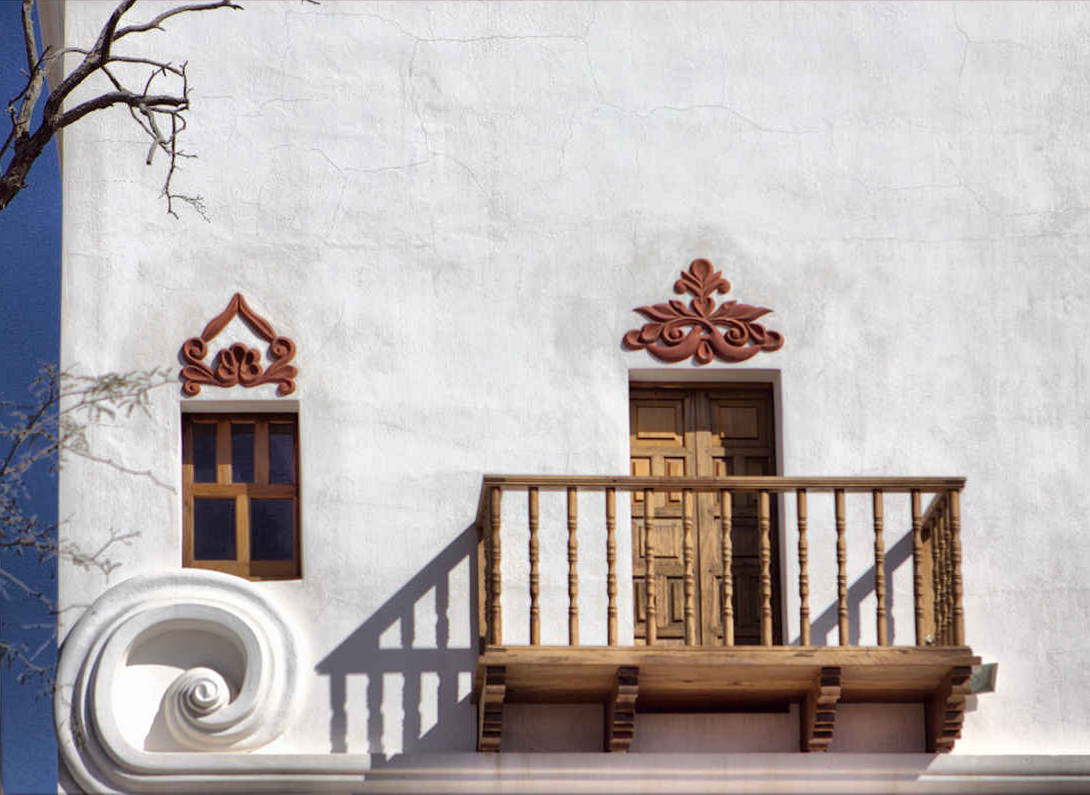 The Franciscans returned to the Mission in 1913. Recently, Mission San Xavier became a seperate nonprofit entity. It remains a testament to the endurance of culture thoughtout our history.

The oldest intact European structure in Arizona, the church's interior is filled with marvelous original statuary and mural paintings. It is a place where visitors can truly step back in time and enter an authentic 18th Century space.1, 3 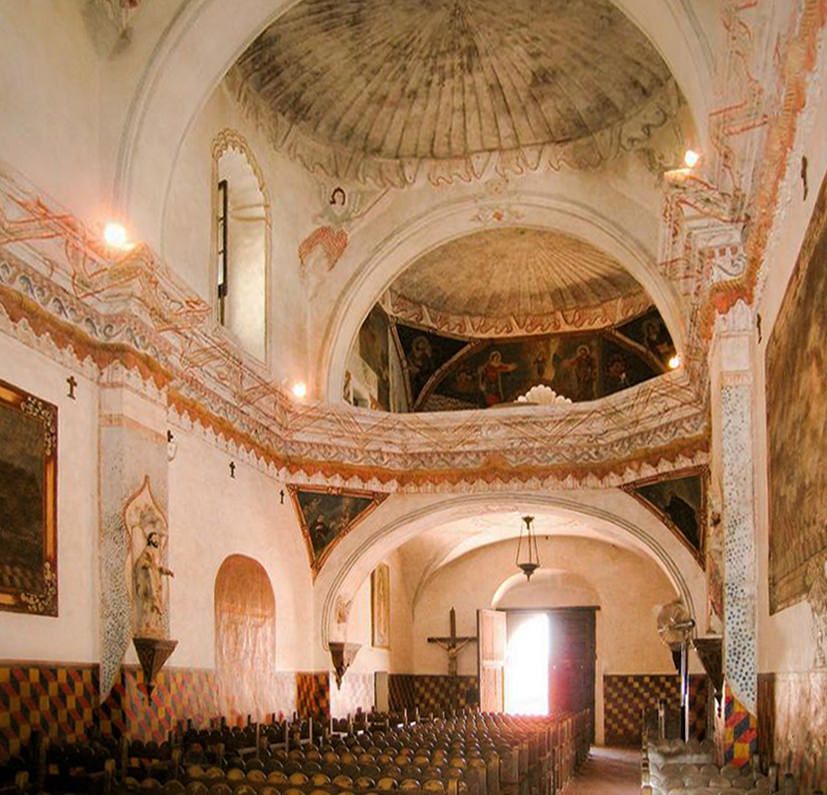 Little is known about the people who decorated the interior. The artwork was problably commissioned by Fr. Velderrain's successor and most likely created by artists from Queretero in New Spain (now Mexico). The sculpture was created in guild workshops and carried by donkey through the Pimeria Alta to its destination at the Mission. Craftsmen created gessoed clothing once the sculpture was in place. 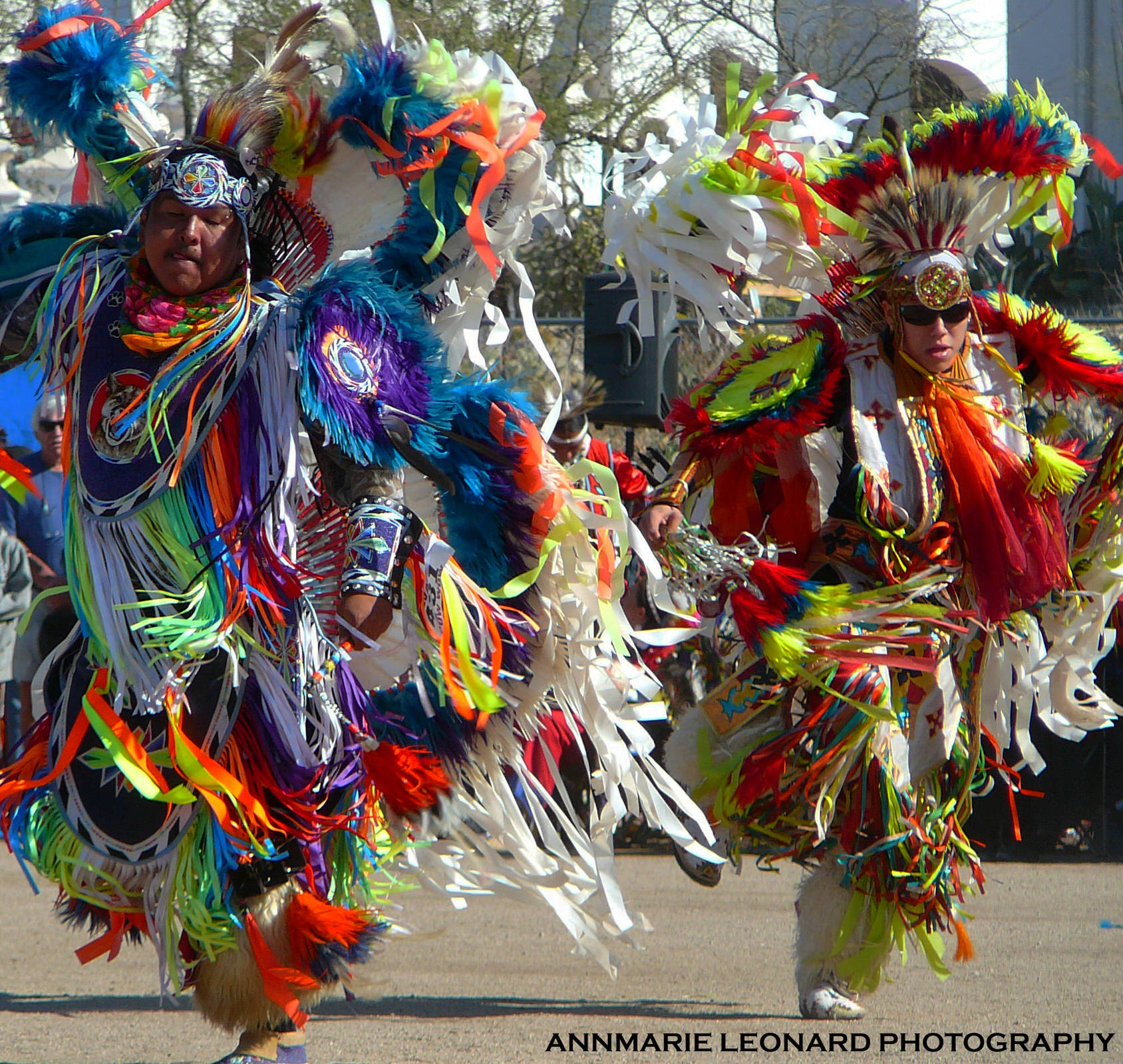 An earthquake in 1887 knocked down the mortuary wall and damaged parts of the church. Extensive repairs began in 1905, under Bishop Henry Granjon. The next round of restoration followed the years after 1939 when a lightening strike hit the West Tower lantern.

A group of community leaders formed the Patronanto San Xavier in 1978 to promote the conservation of Mission San Xavier. Shortly after a comprehensive study of its condition was completed, water seeped into the west wall of the church's sanctuary, forcing an emergency conservation effort by the Patronato. In a five-year program, an international team of conservators cleaned, removed over-painting, and repaired the interior painted and sculptured art of Mission San Xavier del Bac.

The Mission is situated in the center of a centuries-old Indian settlement of the Tohono O'odham (formerly known as Papago), located along the banks of the Santa Cruz River. 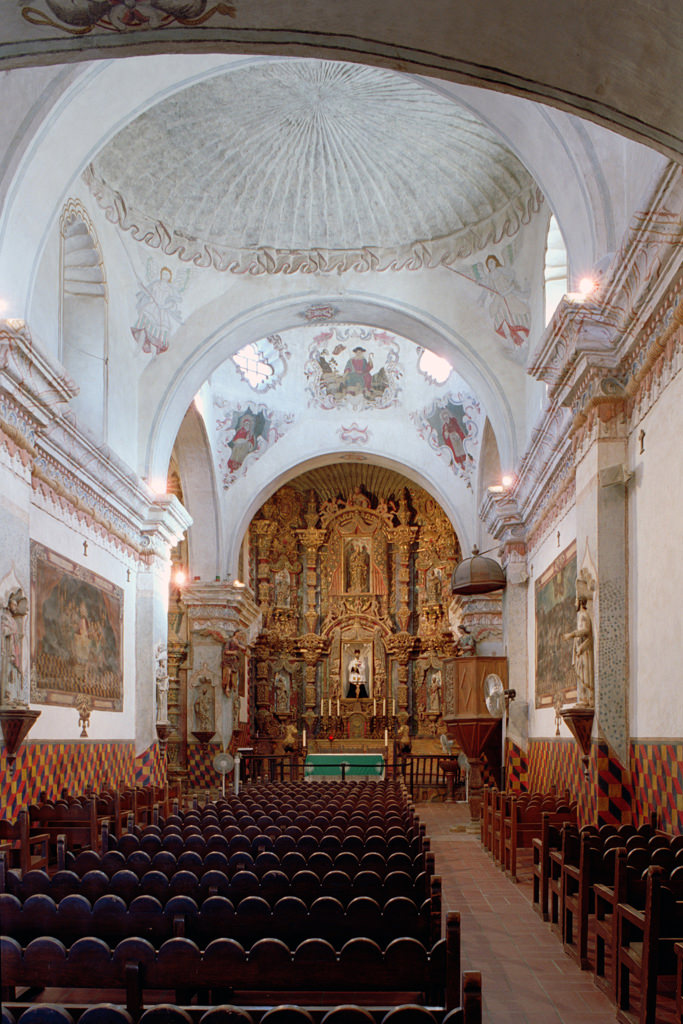 San Xavier Mission was founded as a Catholic mission by Father Eusebio Kino in 1692. Construction of the current church began in 1783 and was completed in 1797. 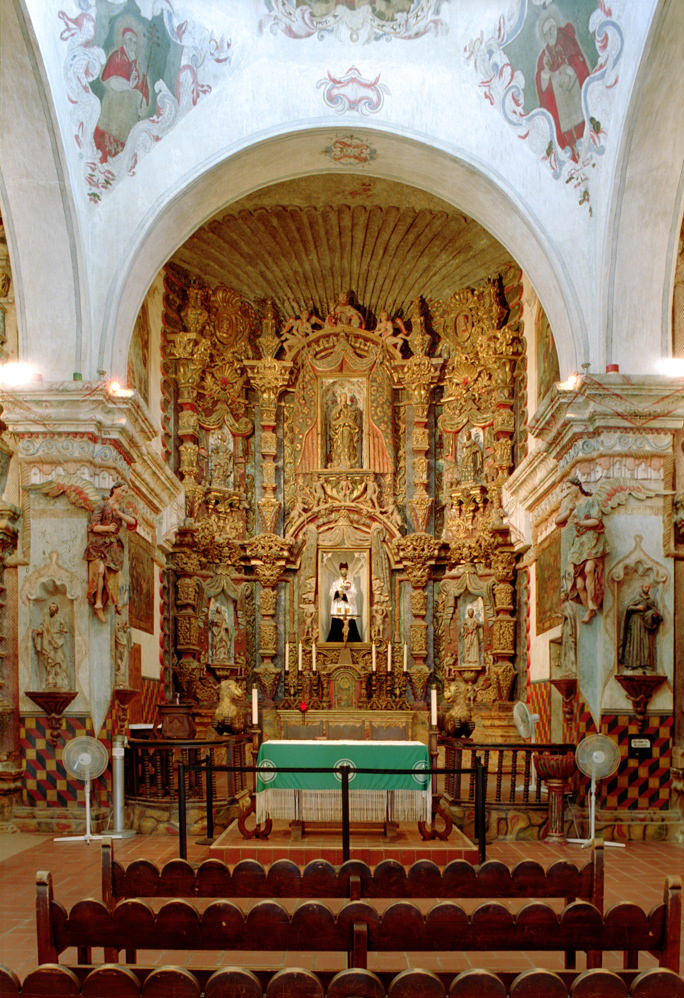 The current church dates from the late 1700's, when Southern Arizona was part of New Spain. In 1783, Franciscan missionary Fr. Juan Bautista Velderrain was able to begin contruction on the present structure usin money borrowed from a Sonoran rancher. He hired an architect, Ignacio Gaona, and a large workforce of O'odham to create the present church. 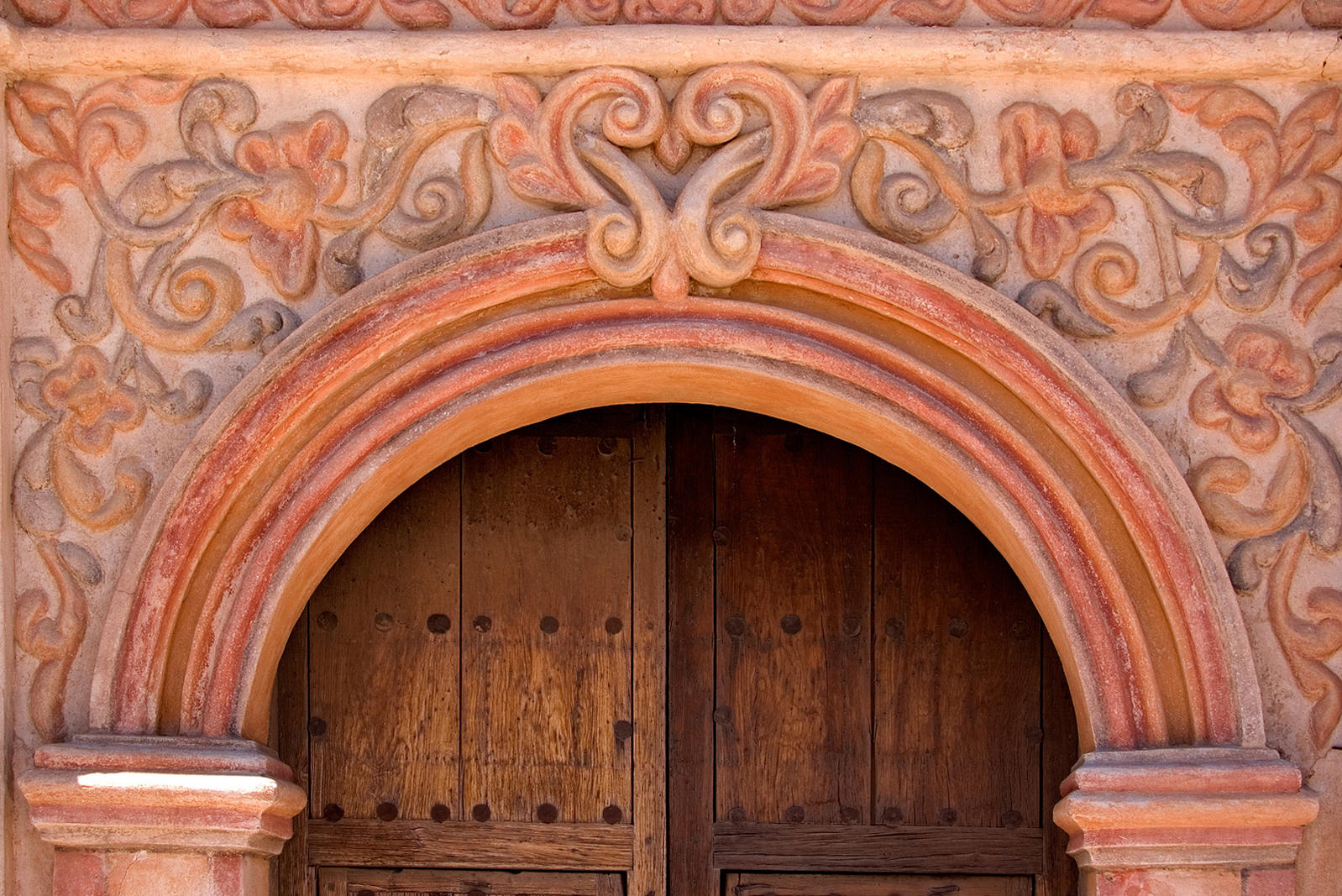 Constructed of low-fire clay brick, stone and lime mortor, the entire structure is roofed with masonary vaults, making it unique among Spanish Colonial uildings within U. S. borders. The architect, Ignacio Gaona, is credited with building another church in Caborca, Sonora Mexico. 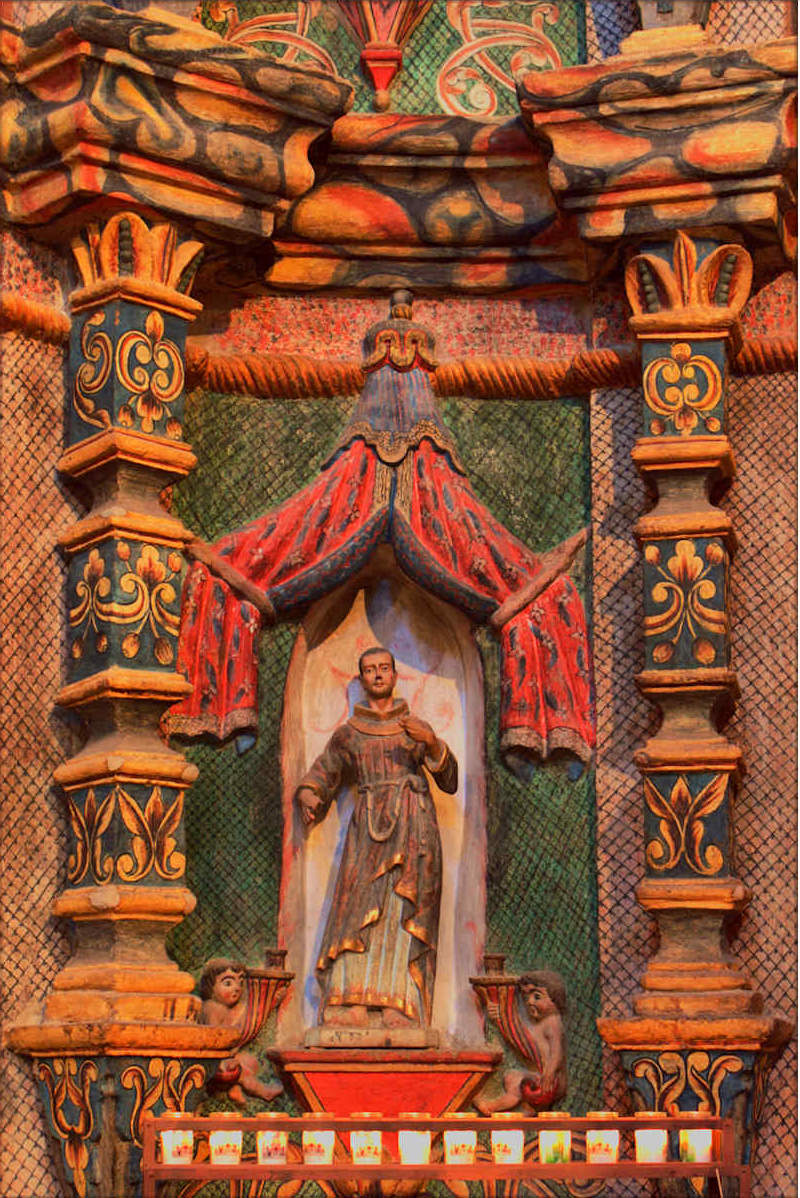 The church contains numerous references to the Franciscan cord both on the facade and throughout the church.

The shell, a symbol of pilgrimage after the patron saint of Spain, Santiago or James the Greater, is replicated all through the structure in window treatments, the sanctuary, the facade and other details within the interior. > 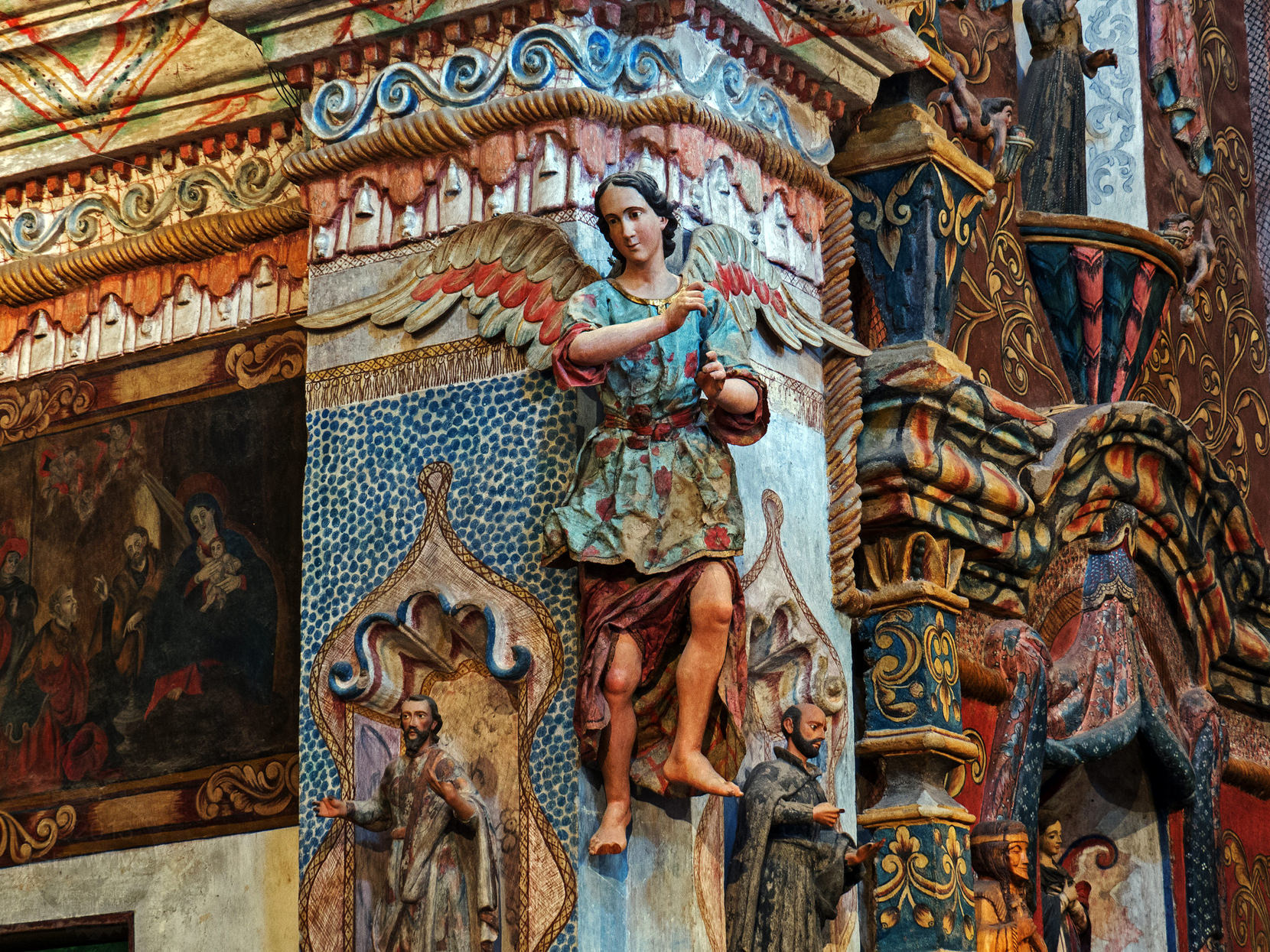 The Patronato continues exterior preservation work begun in 1989. Its restoration team is removing the earlier coating of cement plaster, repairing the historic brick beneath, and re-finishing the exterior surface with a traditional lime plaster. More remains to be done to preserve this landmark for future generations. Please help us preserve this national treasure.2