Metropolitan Cathedral
of Our Lady Aparecida

Hands pointing to the sky 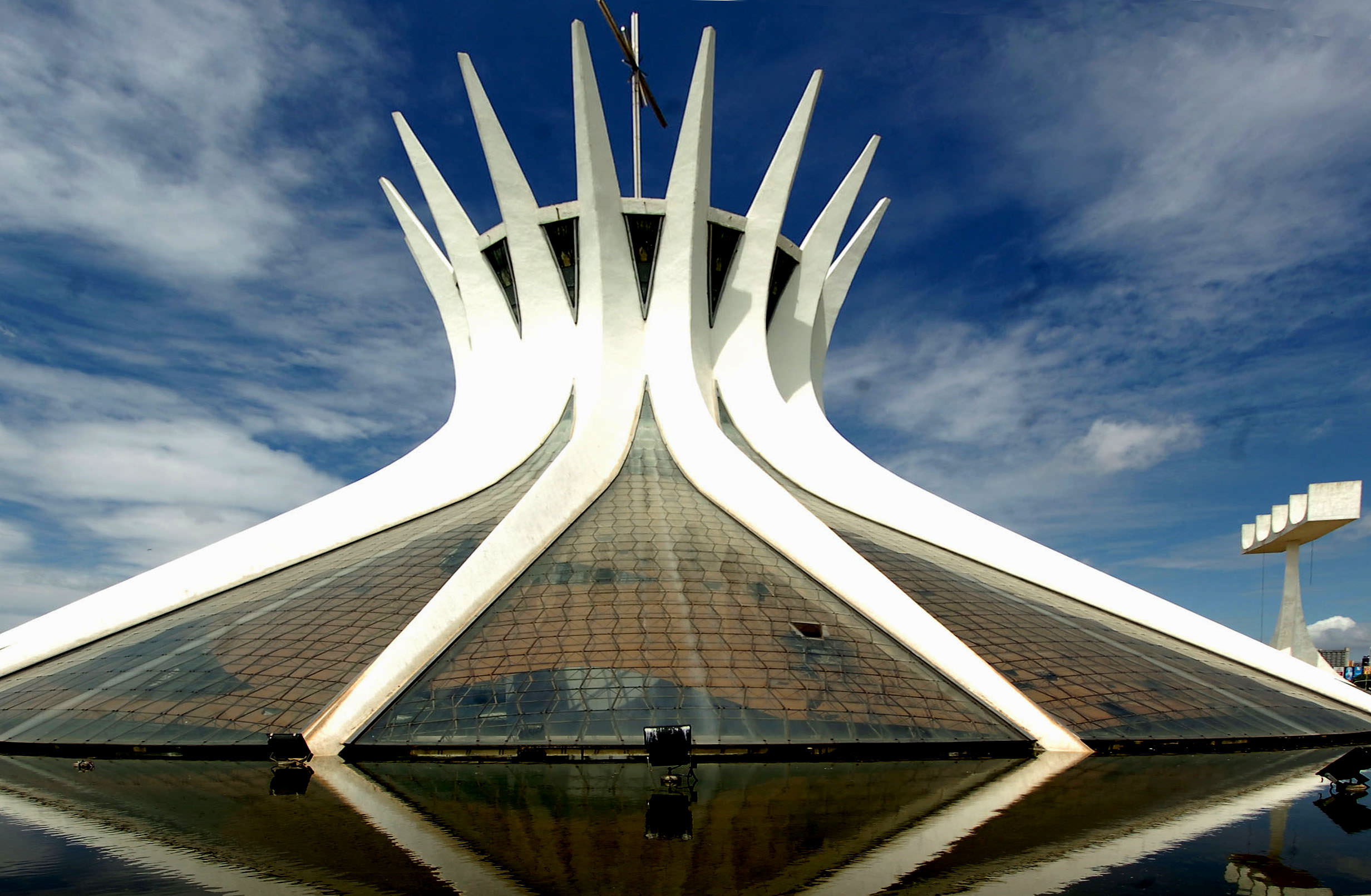 The Cathedral of Brasilia is 40 meters high and holds up to four thousand people. The base of the building is circular and about 60 m in diameter. Its glass ceiling, begins at the floor and is supported by 16 curved columns. Its circular structure prevents the existence of a facade. 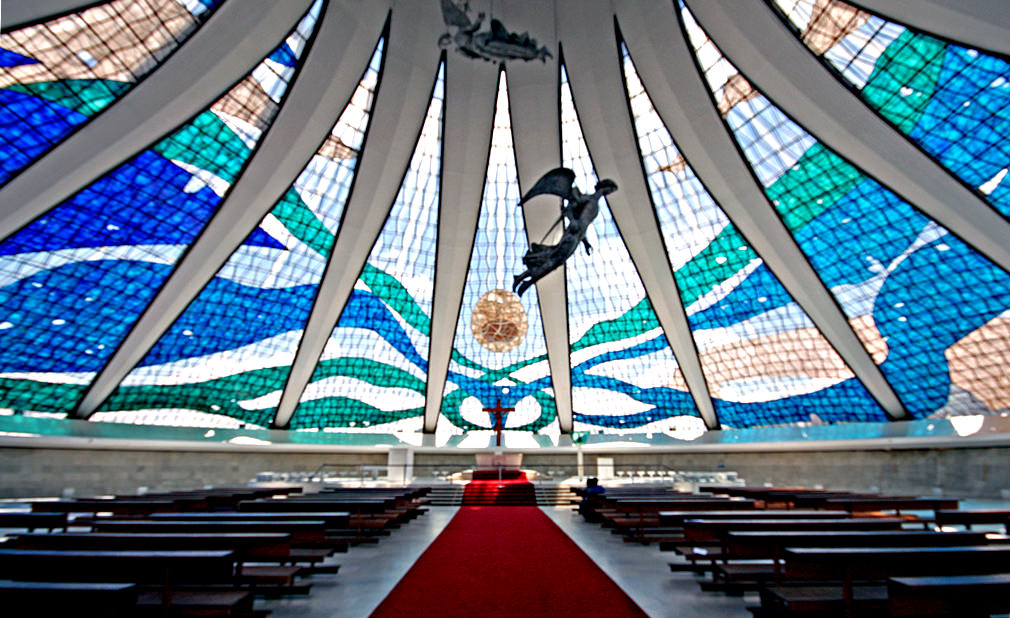 View of Altar with Angels - Cathedral of Brazil.
Photograph by Ann Parbery2

Near the entrance there are four statues known as the Four Evangelists. Finally, in their designs, techniques and materials Niemeyer and Costa combined modern curved lines and the free use of Brazilian baroque reminiscences.

Niemayer's communist and political trends had hoped that any future regime would be established in this Brazil. Niemayer's cathedral was designed so that when Brazil was succumbing to communism, the importance of his temple would not be diminished.

The Cathedral of Brasília ( "Metropolitan Cathedral of Our Lady Aparecida" ) is the Roman Catholic cathedral serving Brasília, Brazil, and serves as the seat of the Archdiocese of Brasília. It was designed by Oscar Niemeyer, and was completed and dedicated on May 31, 1970.1 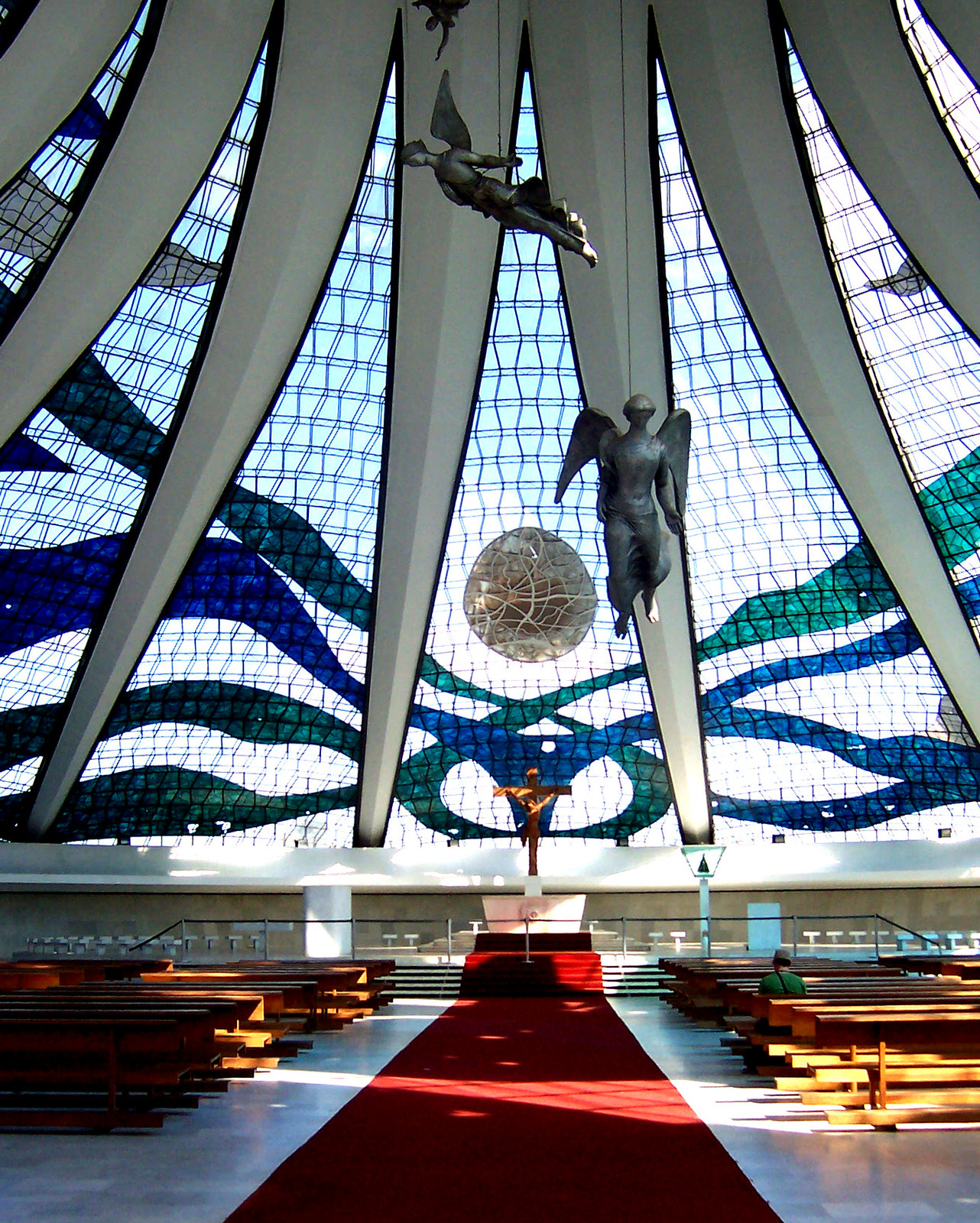 View of Altar with Angels
Cathedral of Brazil.
Photograph by TampaSteve3

Its nave is over 70 meters in diameter, so long, despite the circular from the Cathedral. Its interior is decorated with stained glass. 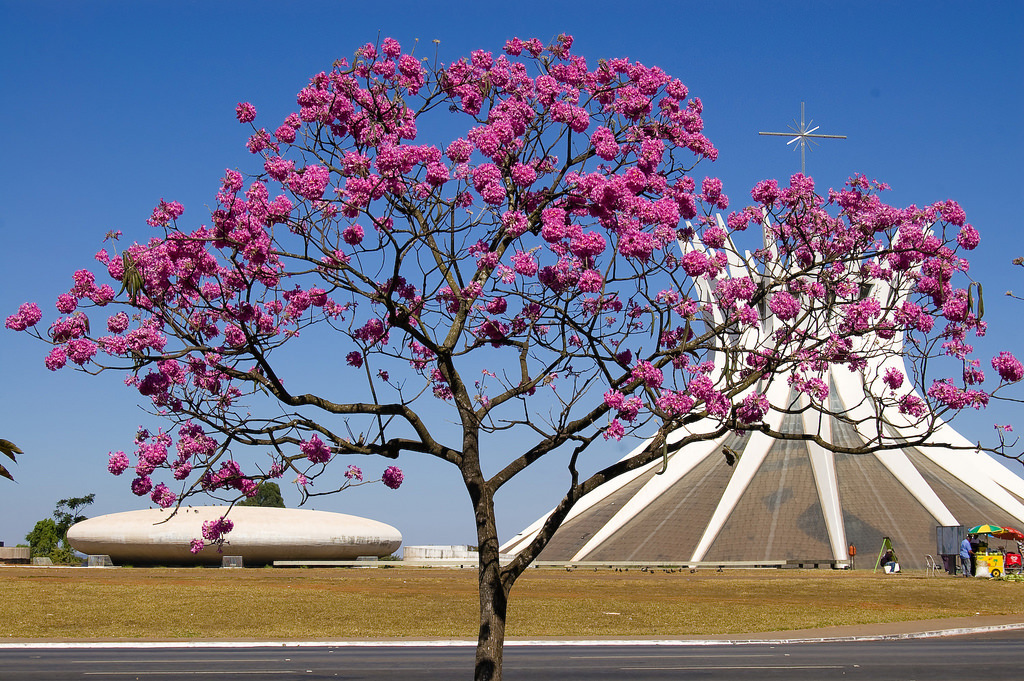 The hyperbolic structure is built of concrete, and it seems that with its glass roof it is raised to the open sky. The structure of the Cathedral of Brasilia was completed on 31 May 1970 and was based on revolved hyperbolas, where the sections are asymmetric. The structure itself is the result of 16 identical columns. These columns, which have a hyperbolic section and weigh 90 tonnes, are pointing both hands to the sky.2

Brasilia is without any doubt a singular city, different from all others; even those ones considered moderns and planned. For such special city, an equally singular Cathedral was designed and built. On 12th September 1958, the Cathedral's cornerstone was laid. The Metropolitan Cathedral of Brasilia is an expression of the geniality of the architect Oscar Niemeyer. In 1960, the Cathedral's structure was finished. 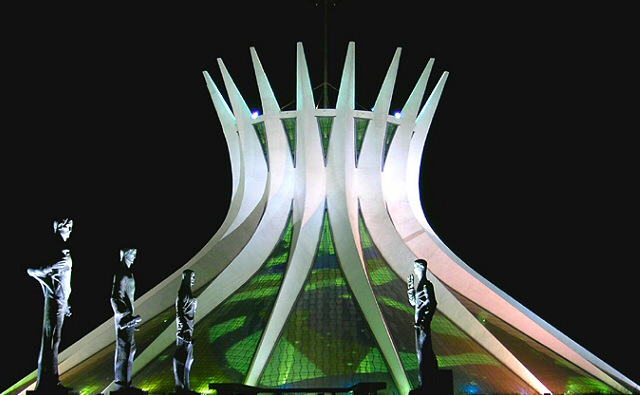 Inside the nave, three sculptures of angels are suspended by steel cables. The sculptures were made by Alfredo Ceschiatti, with the help of Dante Croce, in 1970.3 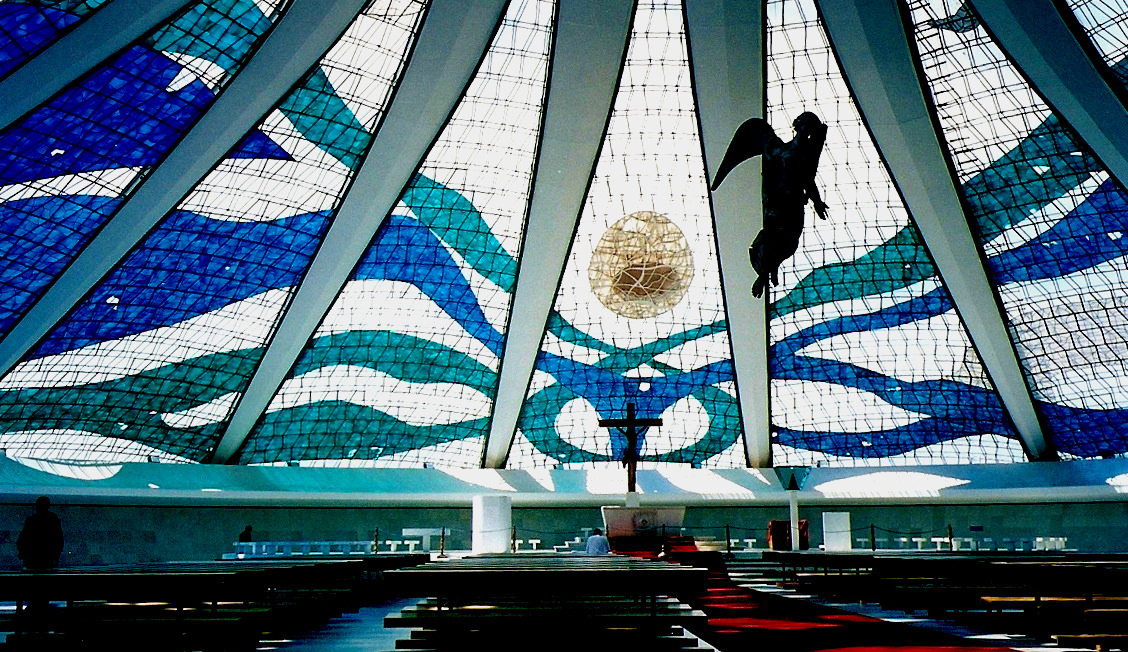 The nave stained glass is made of 16 pieces of fibreglass. These pieces, in colours of blue, white and brown, were fixed between the concrete columns, in triangles. They were painted in 1990 by Marianne Peretti.

The Altar was donated by Pope Paul VI and the image of the Patroness Our Lady of Aparecida is an replica of the original which is at Aparecida do Norte, São Paulo. Di Cavalcanti made the Way of the Cross, which can be seen in one of the marble walls. Just at the entrance of the Cathedral there is a marble pillar with pictures of some passages of the life of Our Lady, the Mother of God, painted by Athos Bulcão. 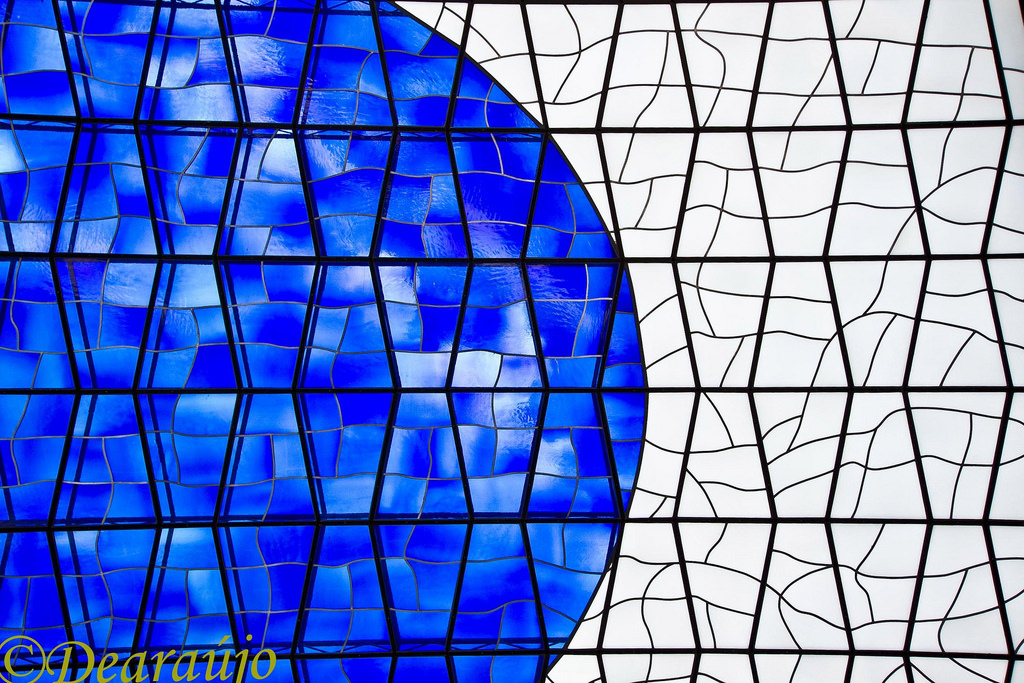 With nearly 1.000.000 visitors per year, the Cathedral is the most visited place in Brasilia.4 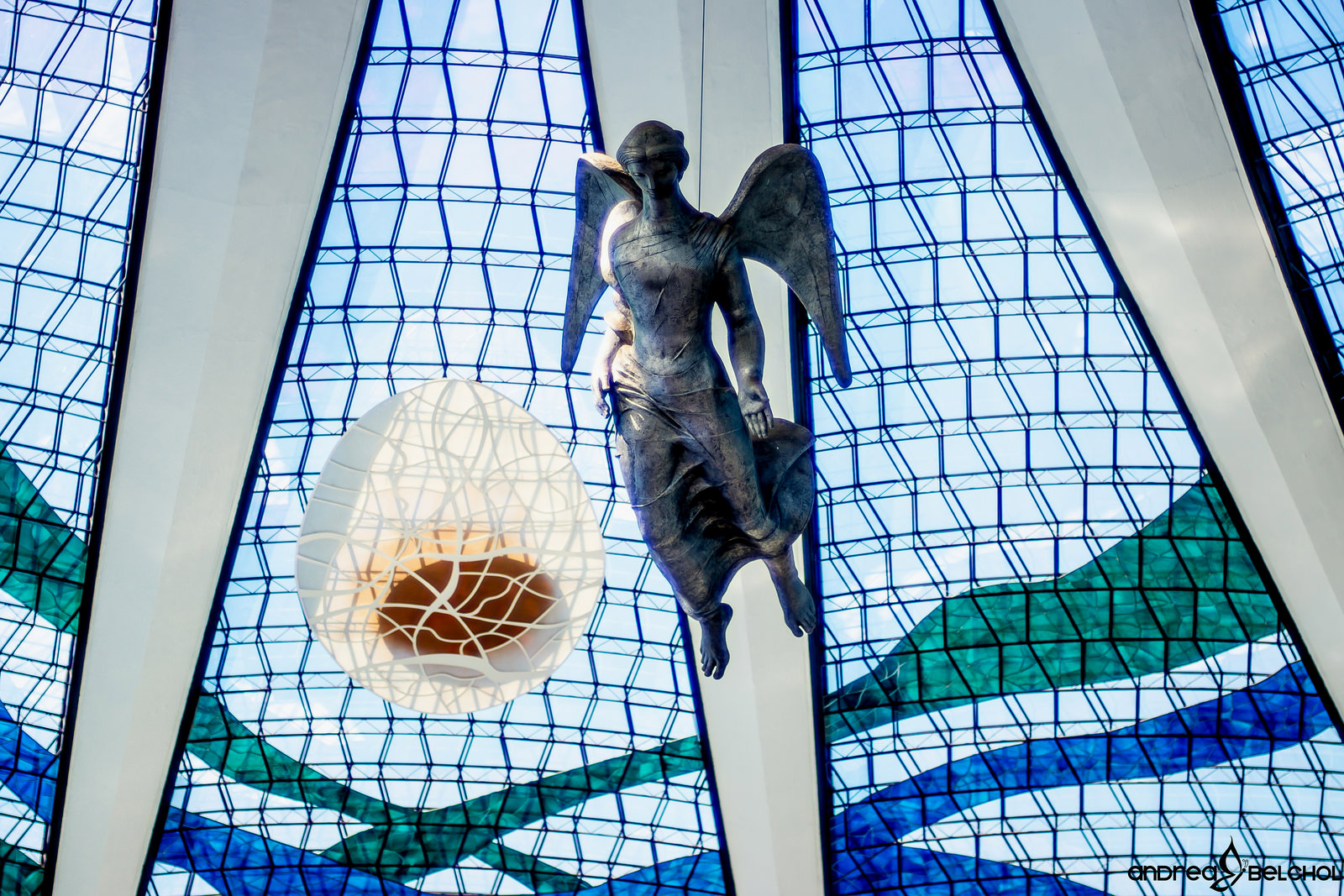 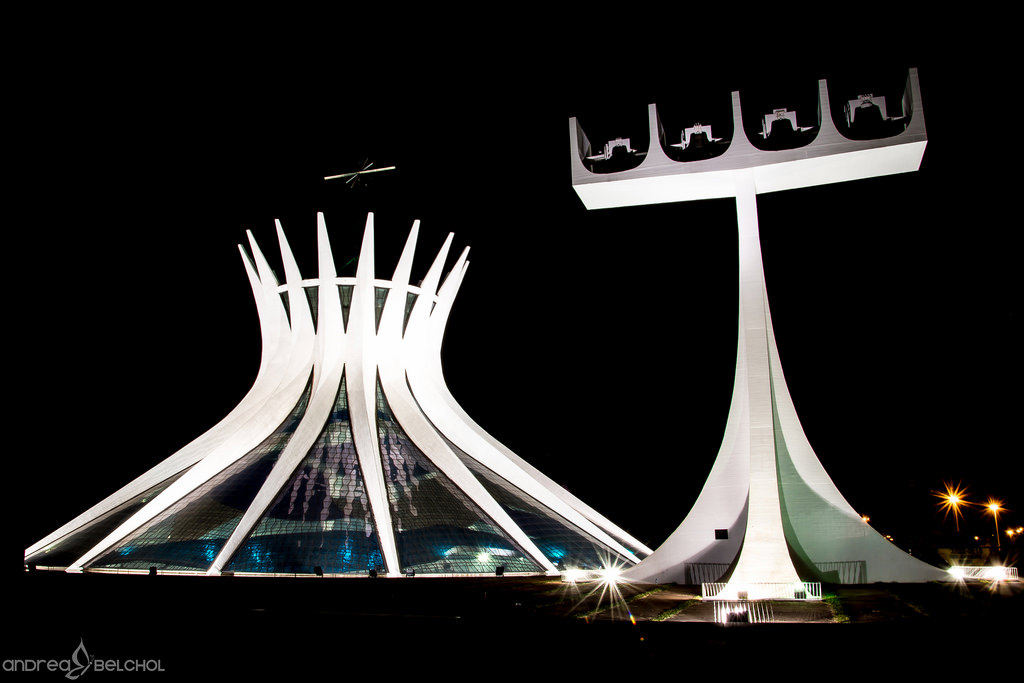 Four bronze sculptures, representing the Evangelists, can be seen at the external square in the entrance of the Temple. These sculptures were made with the help of the sculptor Dante Croce, in 1968. 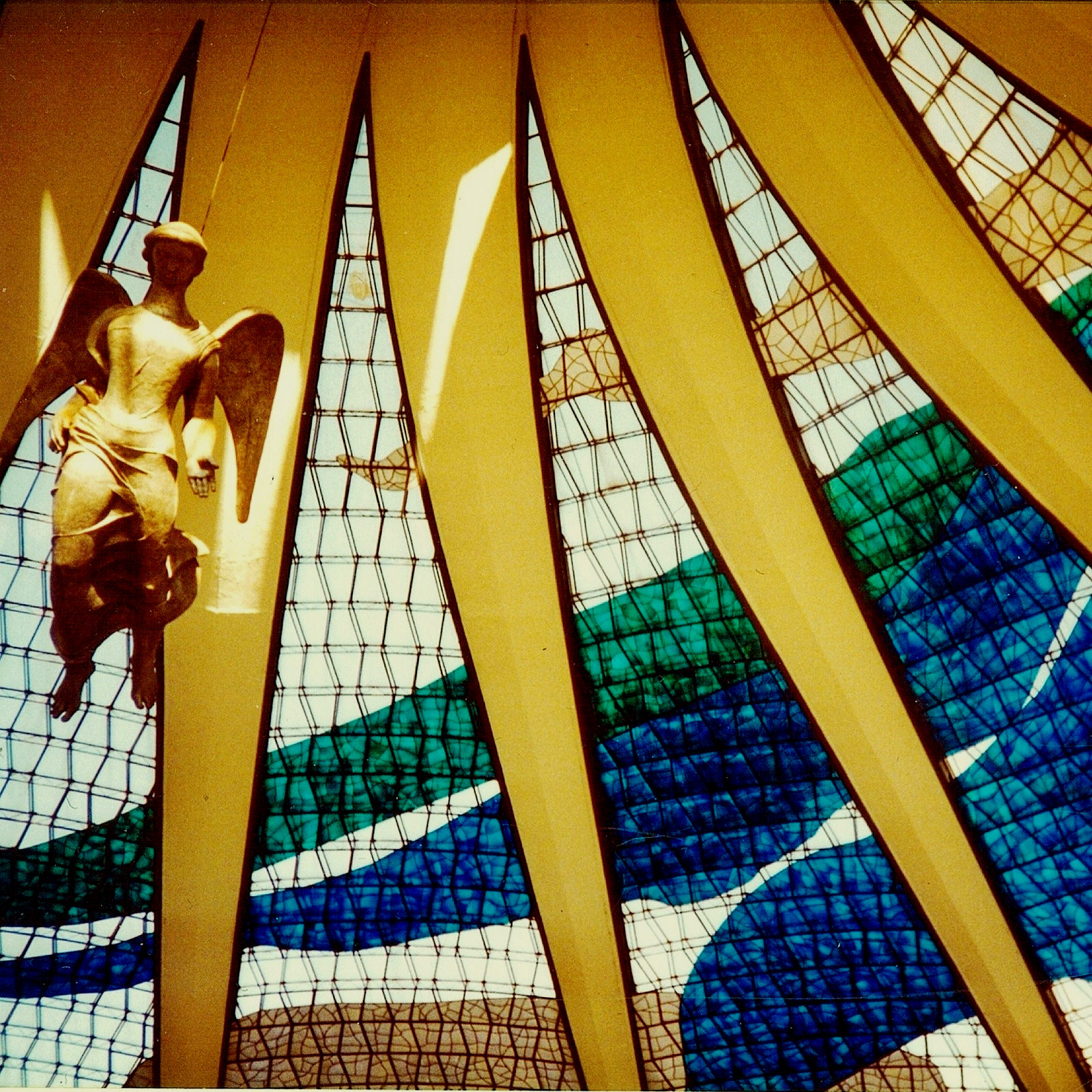 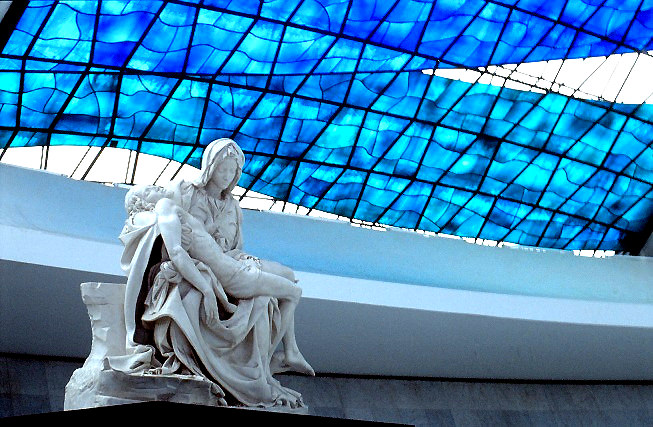 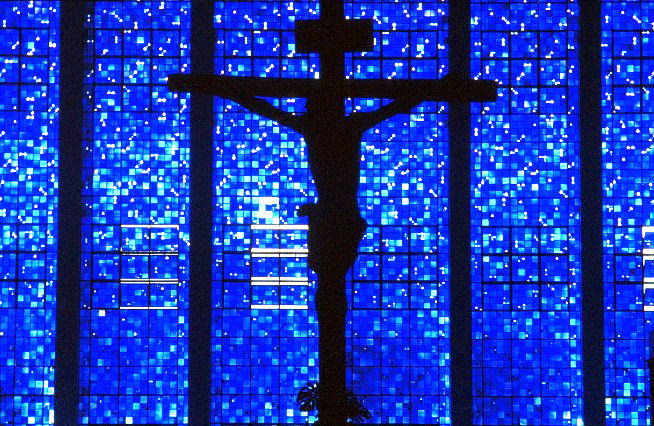 Inside the crypt, there is a reproduction of the Shroud of Turin. The Shroud of Turin is the piece of pure linen cloth that was used to cover the body of Jesus Christ after his crucifixion and before He was laid in the Holy Sepulchre. 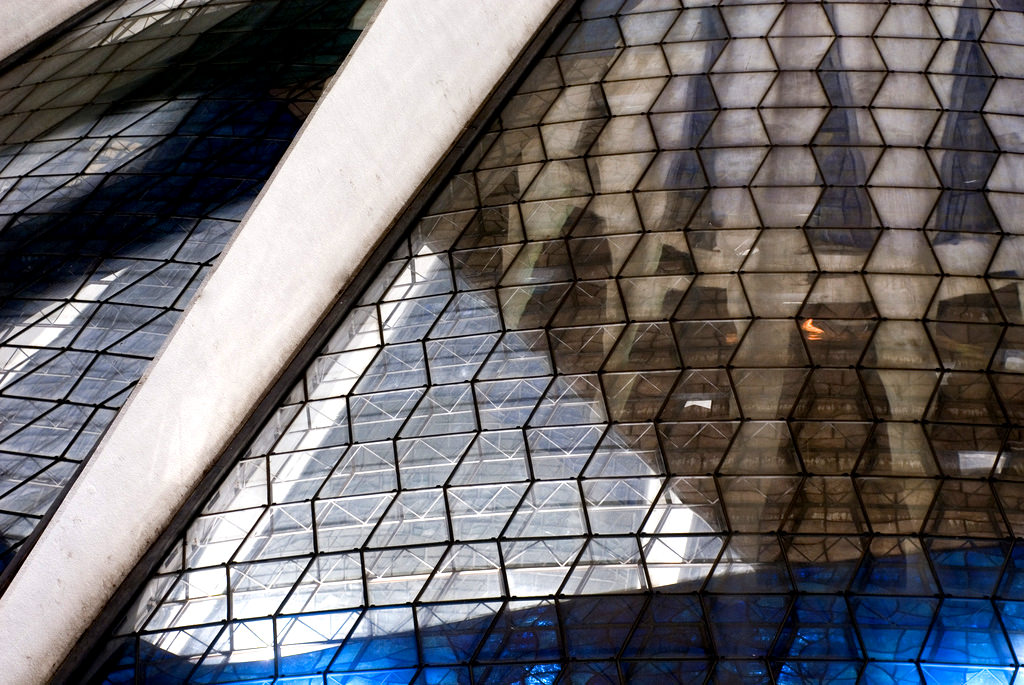