The Shrine of Our Lady of Las Lajas is a temple and basilica to the Catholic Christian worship and veneration of Our Lady of Las Lajas Ipiales located in southern Colombia and tourism and pilgrimage destination since the eighteenth century. The sanctuary is mentioned in Book III of the "Wonders of Nature" by the spanish Franciscan Fray Juan de Santa Gertrudis (Mallorca, 1724 - † Mallorca, 1799). The chronicle of his journey between 1756 - 1762 in the south of the Kingdom of New Granada, is possibly being the oldest reference to its existence. 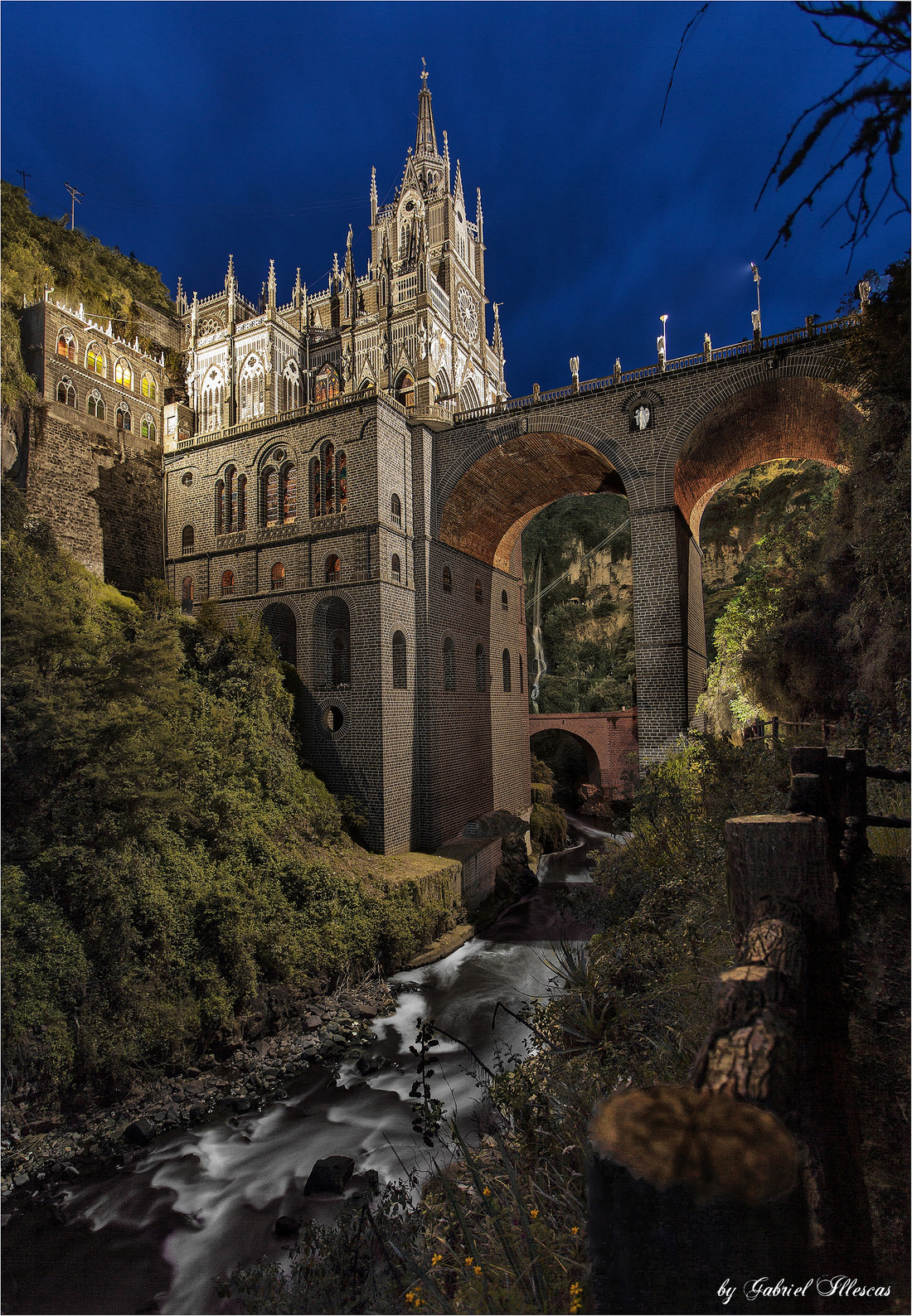 Las Lajas Cathedral or Las Lajas Sanctuary (El santuario de Las Lajas - in Spanish) was build on the place where in 1754 a lightning image of Virgin Mary was seen, and where several churches was build before construction of existing Cathedral. Virgin Mary - is the main Shrine of Columbia and the local Indians cults Her as the patron saint of the terrain and their Queen. 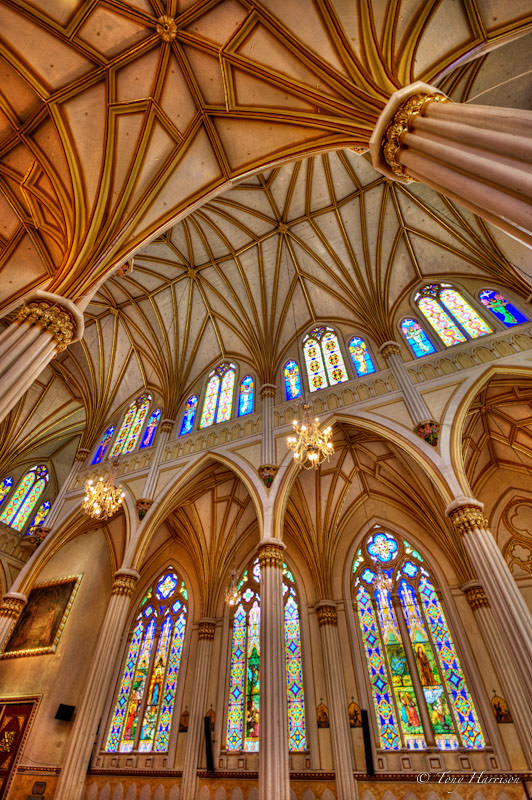 The current church was built with donations from local parishioners. It rises 100 metres (330 ft) high from the bottom of the canyon and is connected with a 50 metres (160 ft) tall bridge to the opposite side of the canyon, Construction of this cathedral, the fourth in a row on this site, began in 1916 and was fully completed in 1949. 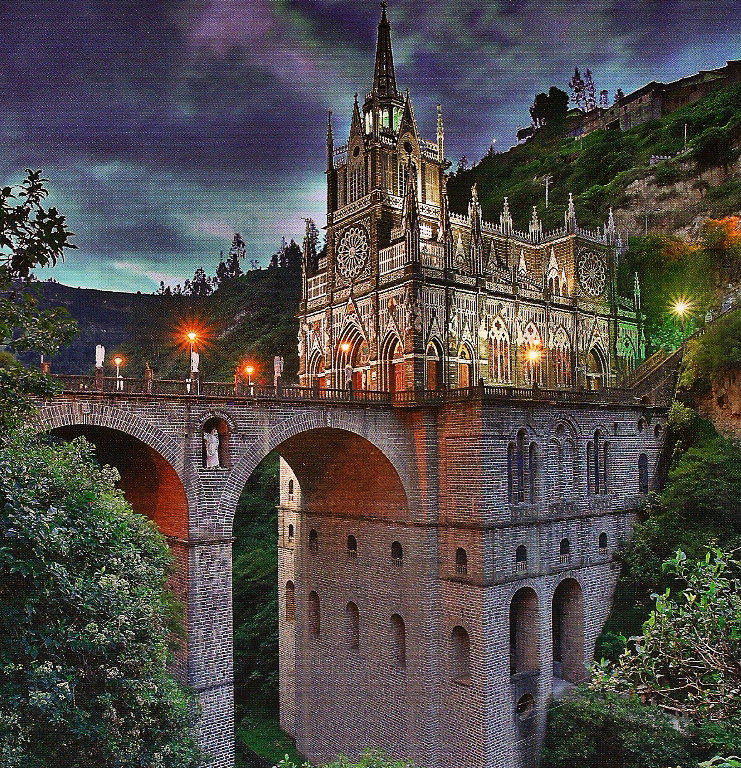 The site was dedicated as minor basilica by the Catholic Church in 1954. The massive church sits 150 feet high over the river below, and its turrets contrast elegantly with the green cliffs and cascading waterfall, which are visible from the arched stone bridge. 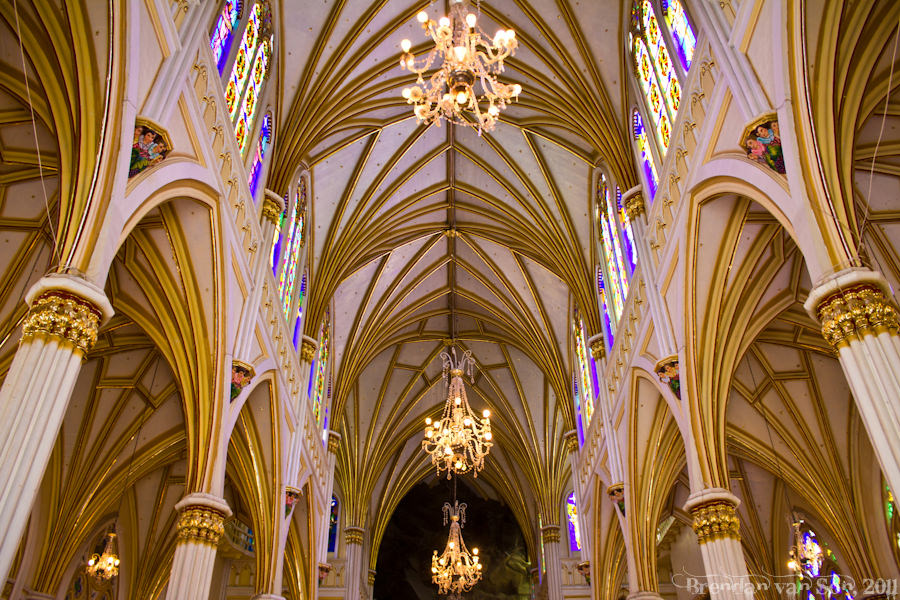 The creators of this Gothic style, fabulously beautiful building in the gorge of Guaitara river are an engineer Gualberto Perez and architect Lucinda Espinoza. The Cathedral of Las Lajas is a hallmark of Colombia and is considered one of the finest architectural works in the world.1, 2 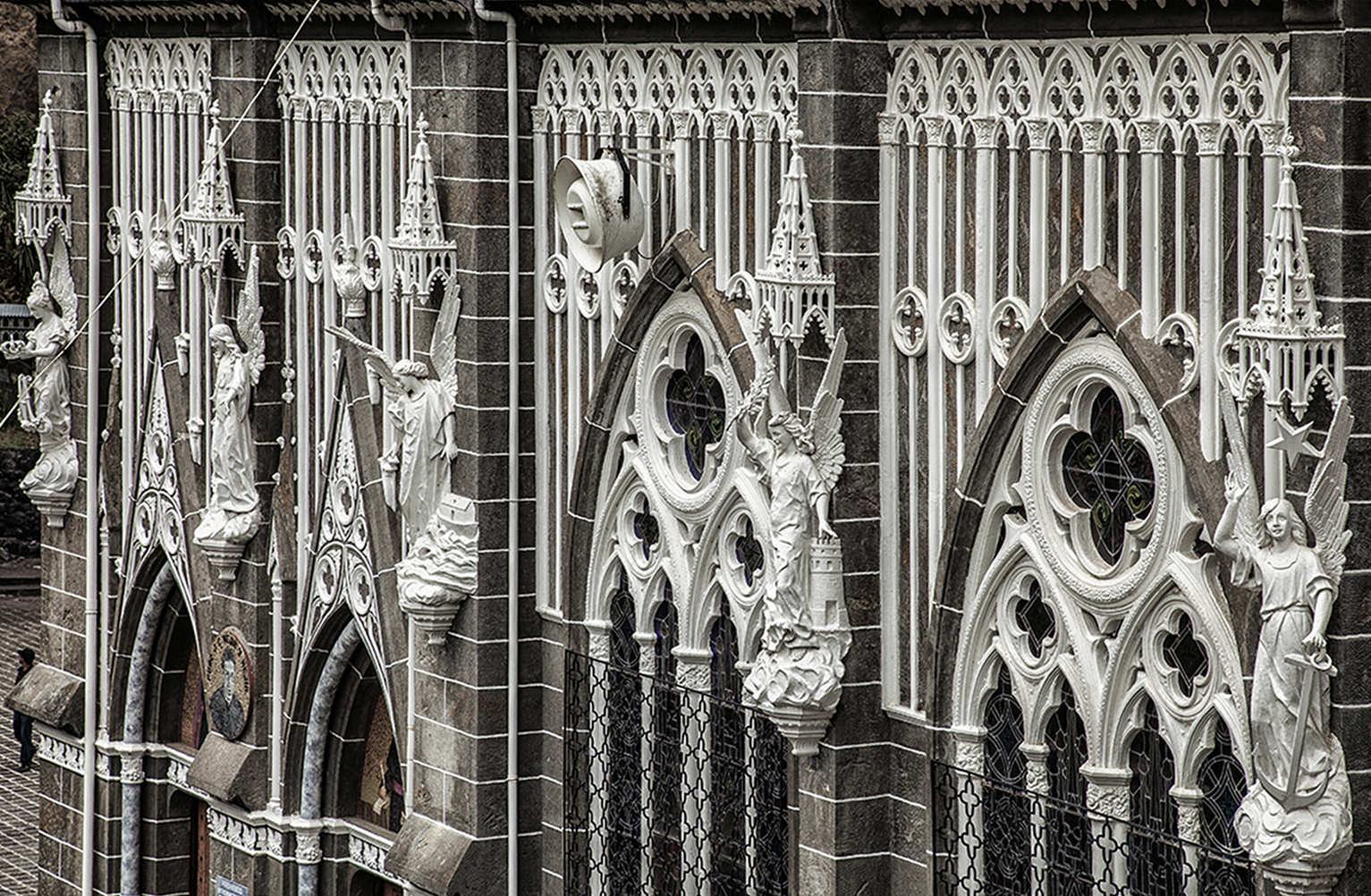 Shortly after the discovery of the Miraculous Image of Our Lady (see right column) was reported, a blind man wandered for ten years from village to village collecting donations to build a chapel around the image. When he returned to Las Lajas, he was able to see again. Both of those 18th century miracles inspired the creation of Las Lajas Sanctuary which was built around the original chapel. The stone image the Miraculous Image on the cliff forms the back wall of the modern sanctuary, making a gorge-spanning bridge and church combination necessary.3 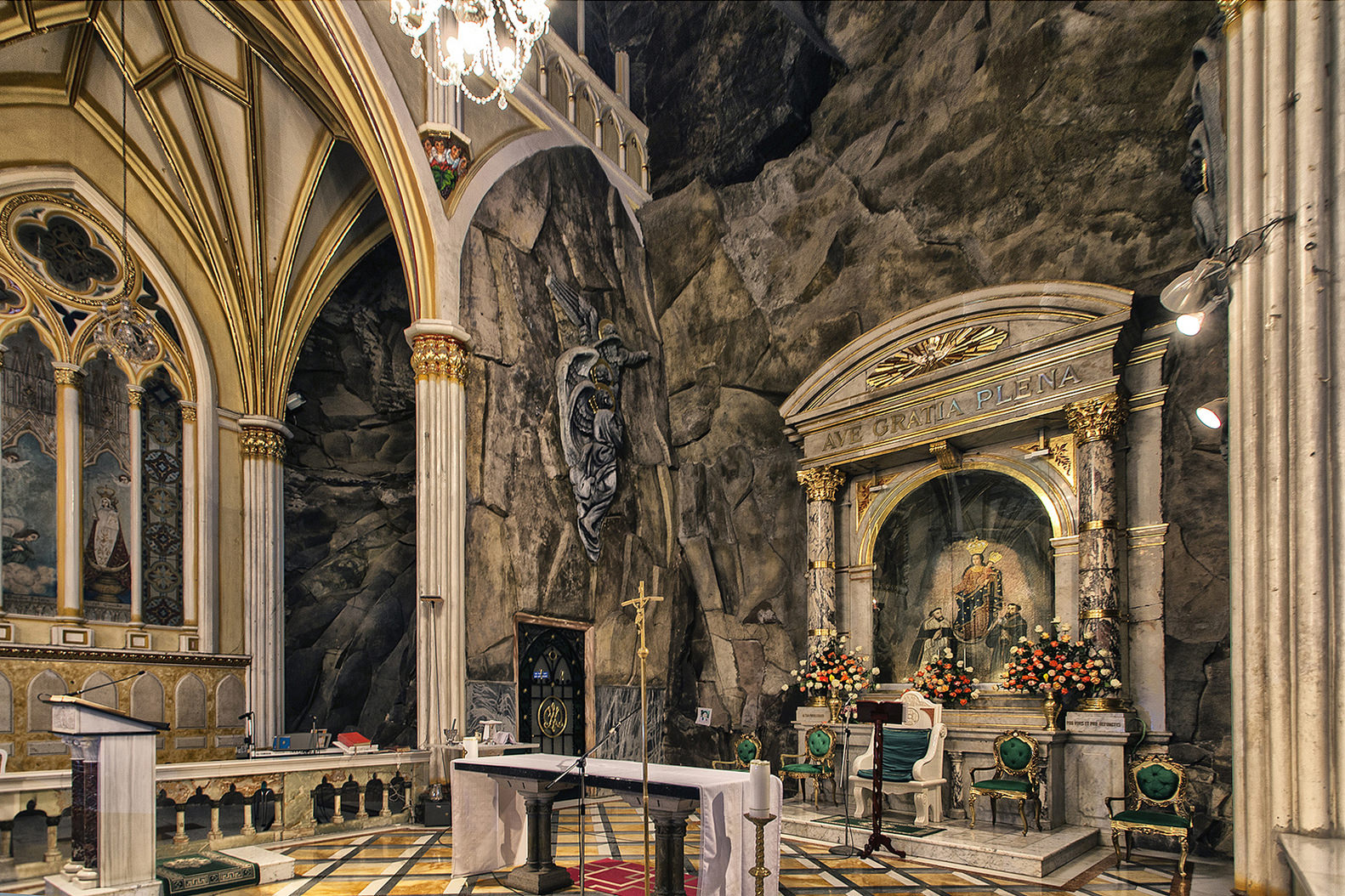 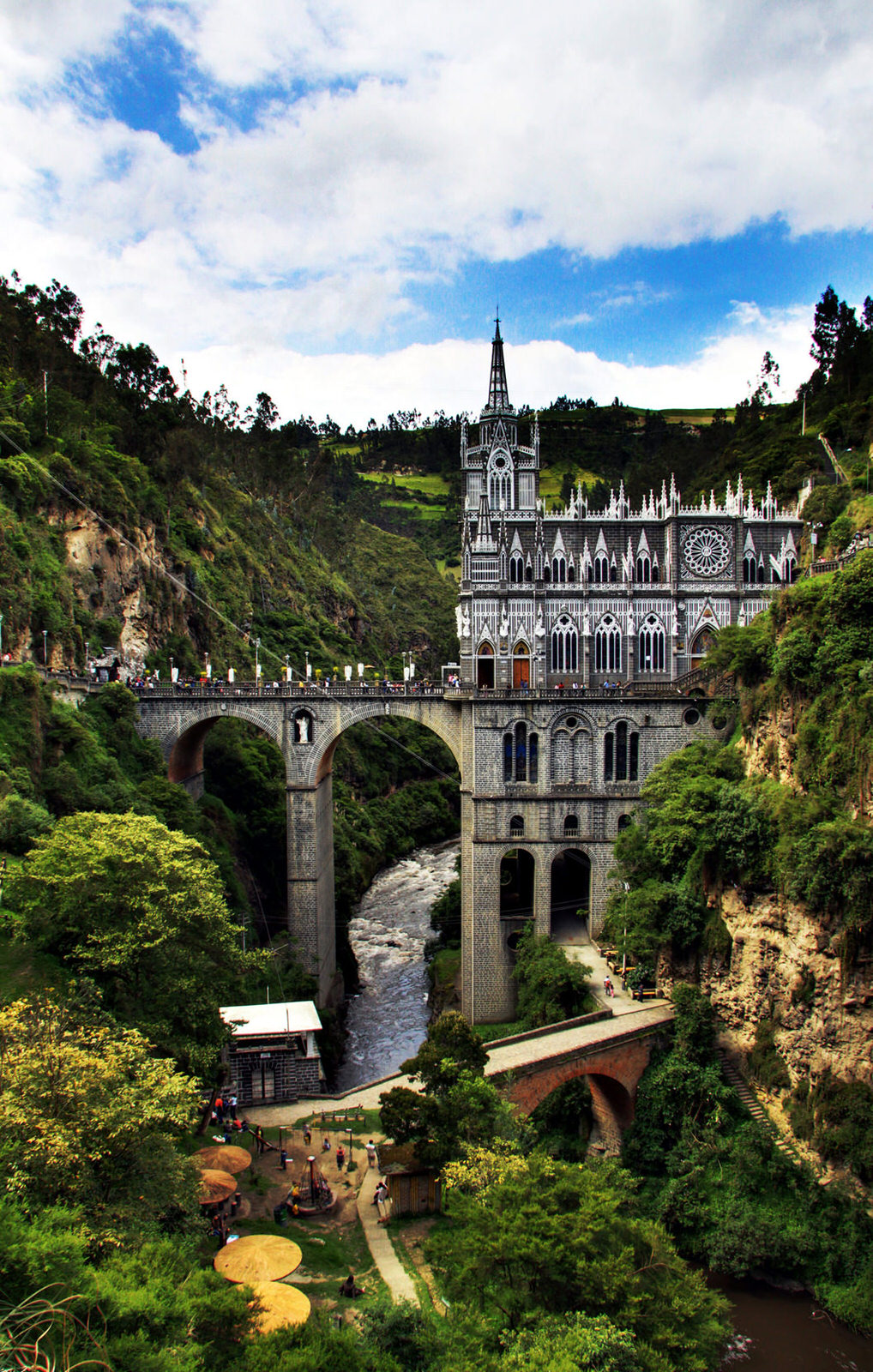 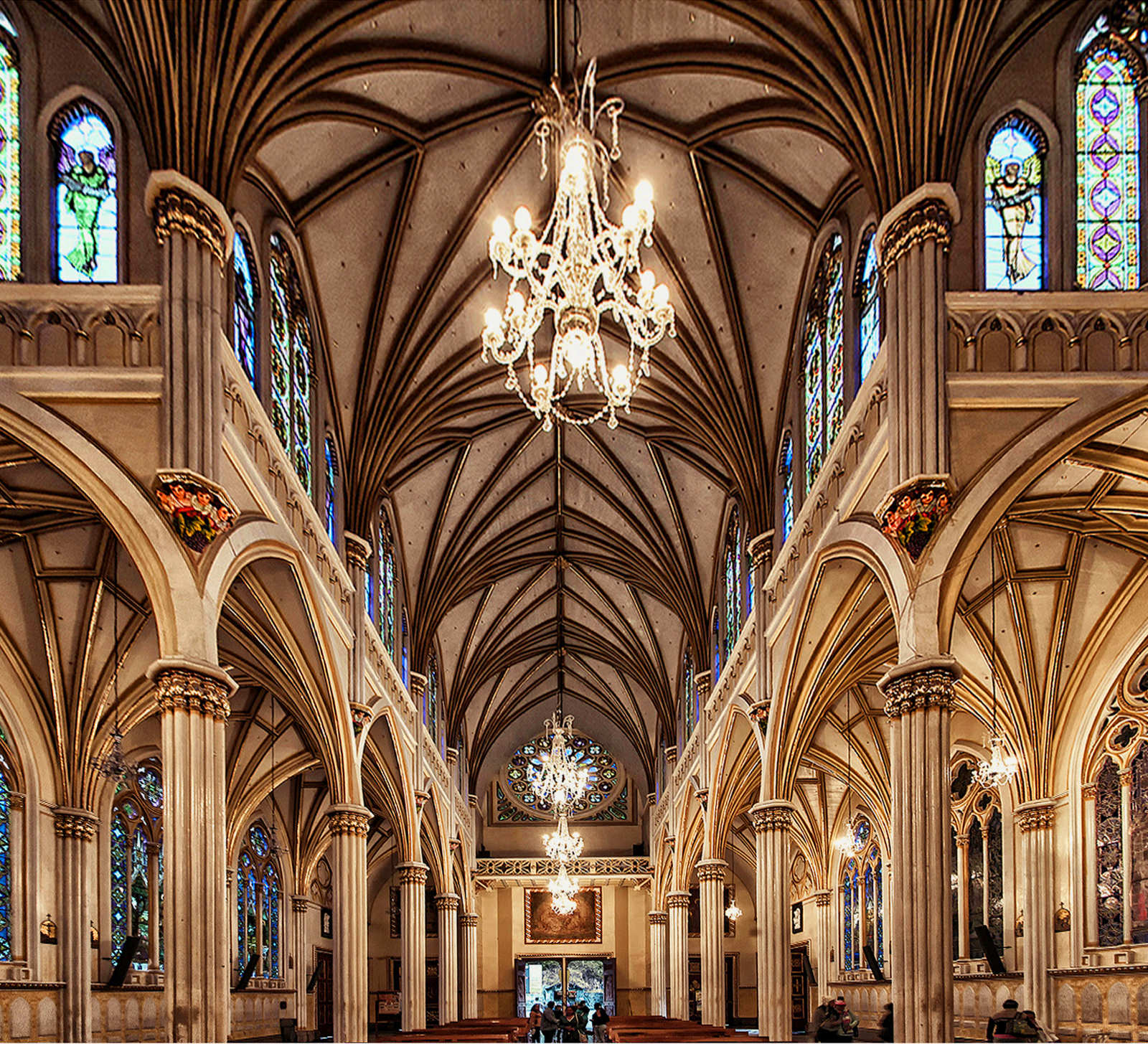 About the Miraculous Image of Our Lady of Las Lajas 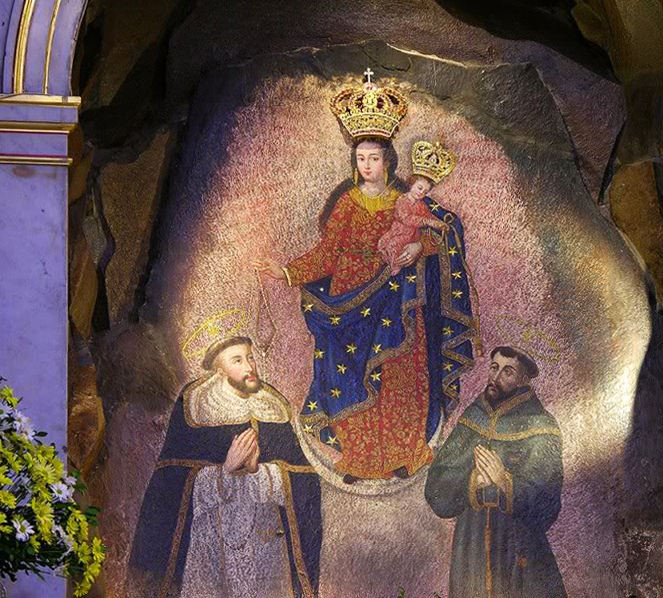 Our Lady of Las Lajas
with Jesus, St. Francis, and St. Dominic9

On the borders between Colombia and Ecuador is a beautiful sanctuary, a wonder to its visitors. There is a venerated image of Our Lady of Las Lajas, and thousands and thousands of pilgrims from both countries visit each year and obtain many favors from God.

Back in the eighteenth century, María Mueses de Quiñones, a local woman from the village of Potosi, Colombia, often walked the six miles between her village and the neighbouring one of Ipiales. One day in 1754 as she was making the journey, she approached the place called Las Lajas (the Rocks), where the trail passes through a deep gorge of the Guaitara River. Maria never liked this part of the trail because there were rumors that a cave in Las Lajas was haunted. Such superstitions remained among the converted Christian Indians.

Maria was carrying her daughter Rosa, a deaf-mute, on her back. And by the time she had climbed to Las Lajas she was weary and sat on a rock to rest. The child got down from her back to play. The next thing Maria knew Rosa was at the cave shouting: "Mommy, there is a woman in here with a boy in her arms!" Maria became very frightened. This was the first time she had ever heard her daughter speak! She didn't see the figures the girl was talking about, nor did she want to. She grabbed the child and ran on to Ipiales.

When she told people what happened nobody took her seriously at first. However, as the news spread some asked if maybe it was true. After all, the child was now able to speak. A few days later Rosa disappeared from home. After looking everywhere the anguished Maria realized that her daughter must have gone to the cave. She often said that the woman was calling her. Maria ran to Las Lajas to find her daughter kneeling in front of a splendid woman and playing affectionately with a child who had come down from His mother's arms to let the girl enjoy His divine tenderness. Maria fell to her knees before this beautiful spectacle; she had seen the Blessed Virgin and Jesus.

Fearful of ridicule, Maria kept quiet about the event. But frequently she and Rosa went to the cave to place wild flowers and candles in the cracks of the rocks. The months went by with María and Rosa keeping their secret. However, one day the girl fell gravely ill and died. A distraught Maria decided to take her daughter's body to Las Lajas to ask Our Lady to restore Rosa to life.

Pressed by the sadness of Maria's unrelenting supplications, the Blessed Virgin obtained Rosa's resurrection from Her Divine Son. Overflowing with joy, Maria went home. It didn't take long for a crowd to gather. Early next morning everyone went to Las Lajas, each wanting to check the details for themselves.

That was when the marvellous picture of Our Lady on the wall of the grotto was discovered. Maria Muese de Quinones could not recall noticing it until then. The child Jesus is in Our Lady's arms. On one side of Our Lady is Saint Francis; on the other is Saint Dominic. Her delicate and regal features are those of a Latin American, perhaps an Indian. Her abundant black hair covers her like a mantle (The two-dimensional crown is metal and was added by devotees much later on). Her eyes sparkle with a pure and friendly glow. She looks about fourteen years old. The indians had no doubt: this was their Queen.

As devotion to the image grew, a good road replaced the old trail. In the early 20th century a tasteful gothic church was built over the cave. But who put this magnificent image there? The artist has never been identified! Scoffers say the wily Dominicans sneaked in a good artist, and the gullible indians are still being fooled.

But tests done when the church was built show how stupendous this image actually is. Geologists from Germany bored core samples from several spots in the image. There is no paint, no dye, nor any other pigment on the surface of the rock. The colors are the colors of the rock itself. Even more incredible, the rock is perfectly colored to a depth of several feet!

So the mystery remains unsolved. Did angels do it? Or did God Himself do it at the dawn of creation, when he contemplated the most excellent of all His creatures? The One whom He would make Queen of Heaven and Earth and to whose maternal care the future nation of Colombia would be entrusted.4