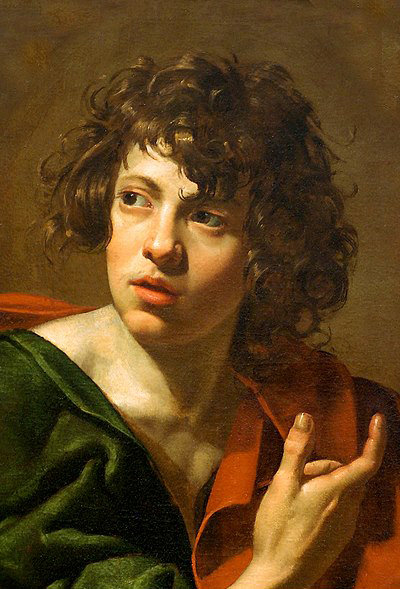 John, the Apostle (AD 6 – c. 100) was one of the Twelve Apostles of Jesus… Generally listed as the youngest apostle, he was the son of Zebedee and Salome or Joanna. His brother was James, who was another of the Twelve Apostles. The Church Fathers identify him as John the Evangelist, John of Patmos, John the Elder and the Beloved Disciple, and testify that he outlived the remaining apostles and that he was the only one to die of natural causes. The traditions of most Christian denominations have held that John, the Apostle is the author of several books of the New Testament.

References to John in the New Testament

John, the Apostle was the son of Zebedee and the younger brother of James, son of Zebedee (James the Greater). According to Church tradition, their mother was Salome.

He was first a disciple of John the Baptist. John is traditionally believed to be one of two disciples (the other being Andrew) recounted in John 1: 35-39, who upon hearing the Baptist point out Jesus as the "Lamb of God", followed Jesus and spent the day with him.

Zebedee and his sons fished in the Sea of Galilee. Jesus then called Peter, Andrew and these two sons of Zebedee to follow him. James and John are listed among the Twelve Apostles. Jesus referred to the pair as "Boanerges " (translated "sons of thunder"). A gospel story relates how the brothers wanted to call down heavenly fire on an unhospitable Samaritan town, but Jesus rebuked them. [Lk 9:51-6] John lived for more than half a century following the martyrdom of James, who was the first Apostle to die a martyr's death.

Other references to John

Peter, James and John were the only witnesses of the raising of the Daughter of Jairus. All three also witnessed the Transfiguration, and these same three witnessed the Agony in Gethsemane more closely than the other Apostles did. John was the disciple who reported to Jesus that they had 'forbidden' a non-disciple from casting out demons in Jesus' name, prompting Jesus to state that 'he who is not against us is on our side'.

Jesus sent only John and Peter into the city to make the preparation for the final Passover meal (the Last Supper). [Lk 22:8] At the meal itself, the "disciple whom Jesus loved" sat next to Jesus. It was customary to lie along upon couches at meals, and this disciple leaned on Jesus. Tradition identifies this disciple as Saint John [Jn 13:23-25]. After the arrest of Jesus, Peter and the "other disciple" (according to Sacred Tradition), John followed him into the palace of the high-priest.

John alone among the Apostles remained near Jesus at the foot of the cross on Calvary alongside myrrh bearers and numerous other women; following the instruction of Jesus from the Cross, John took Mary, the mother of Jesus into his care as the last legacy of Jesus [Jn 19:25-27]. After Jesus' Ascension and the descent of the Holy Spirit at Pentecost, John, together with Peter, took a prominent part in the founding and guidance of the church. He was with Peter at the healing of the lame man at Solomon's Porch in the Temple [Ac 3:1 et seq.] and he was also thrown into prison with Peter. [Acts 4:3] He went with Peter to visit the newly converted believers in Samaria. [Acts 8:14]

While he remained in Judea and the surrounding area, the other disciples returned to Jerusalem for the Apostolic Council (about AD 51). Paul, in opposing his enemies in Galatia, recalls that John explicitly, along with Peter and James the Just, were referred to as "pillars of the church" and refers to the recognition that his Apostolic preaching of a gospel free from Jewish Law received from these three, the most prominent men of the messianic community at Jerusalem.

The disciple whom Jesus loved

The phrase the disciple whom Jesus loved … is used five times in the Gospel of John, but in no other New Testament accounts of Jesus. John 21:24 claims that the Gospel of John is based on the written testimony of this disciple…

It is this disciple who, while reclining beside Jesus at the Last Supper, asks Jesus, after being requested by Peter to do so, who it is that will betray him. [Jn 13:23-25]

Later at the crucifixion, Jesus tells his mother, "Woman, here is your son", and to the Beloved Disciple he says, "Here is your mother." [Jn 19:26-27]

In John 21, the last chapter of the Gospel of John, the Beloved Disciple is one of seven fishermen involved in the miraculous catch of 153 fish. [Jn 21:1-25]

Also in the book's final chapter, after Jesus hints to Peter how Peter will die, Peter sees the Beloved Disciple following them and asks, "What about him?" Jesus answers, "If I want him to remain until I come, what is that to you? You follow Me!" [John 21:20-23]

Again in the gospel's last chapter, it states that the very book itself is based on the written testimony of the disciple whom Jesus loved. [John 21:24]

None of the other Gospels has anyone in the parallel scenes that could be directly understood as the Beloved Disciple. For example, in Luke 24:12, Peter alone runs to the tomb. Mark, Matthew and Luke do not mention any one of the twelve disciples having witnessed the crucifixion.

Early tradition says that John was banished to Patmos by the Roman authorities. This tradition is credible because banishment was a common punishment used during the Imperial period for a number of offenses. Among such offenses were the practices of magic and astrology. Prophecy was viewed by the Romans as belonging to the same category, whether Pagan, Jewish, or Christian. Prophecy with political implications, like that expressed by John in the book of Revelation, would have been perceived as a threat to Roman political power and order. Three of the islands in the Sporades were places where political offenders were banished. (Pliny Natural History 4.69-70; Tacitus Annals 4.30)…

There is no information in the Bible concerning the duration of John's activity in Judea. According to tradition, John and the other Apostles remained some 12 years in this first field of labour. The persecution of Christians under Herod Agrippa I led to the scattering of the Apostles through the Roman Empire's provinces. [cf. Ac 12:1-17]

A messianic community existed at Ephesus before Paul's first labors there (cf. "the brethren"), [Acts 18:27] in addition to Priscilla and Aquila. The original community was under the leadership of Apollos (1 Corinthians 1:12). They were disciples of John the Baptist and were converted by Aquila and Priscilla. According to Church tradition, after the Assumption of Mary, John went to Ephesus. From there he wrote the three epistles attributed to him. John was allegedly banished by the Roman authorities to the Greek island of Patmos, where, according to tradition, he wrote the Book of Revelation. According to Tertullian (in The Prescription of Heretics) John was banished (presumably to Patmos) after being plunged into boiling oil in Rome and suffering nothing from it. It is said that all in the audience of Colosseum were converted to Christianity upon witnessing this miracle. This event would have occurred in the late 1st century, during the reign of the Emperor Domitian, who was known for his persecution of Christians.

When John was aged, he trained Polycarp who later became Bishop of Smyrna. This was important because Polycarp was able to carry John's message to future generations. Polycarp taught Irenaeus, passing on to him stories about John. Similarly, Ignatius of Antioch was a student of John and later appointed by Saint Peter to be the Bishop of Antioch. In Against Heresies, Irenaeus relates how Polycarp told a story of John, the disciple of the Lord, going to bathe at Ephesus, and perceiving Cerinthus within, rushed out of the bath-house without bathing, exclaiming, "Let us fly, lest even the bath-house fall down, because Cerinthus, the enemy of the truth, is within."

It is traditionally believed that John was the youngest of the apostles and survived them. He is said to have lived to an old age, dying at Ephesus sometime after AD 98, possibly surviving into the second century… 1