"In Ramah is heard the sound of moaning, of bitter weeping! Rachel mourns her children, she refuses to be consoled because her children are no more."1

Christian Persecution begins appropriately with the birth of Jesus as the Holy Family is forced into exile in Egypt and an untold number of children are slaughtered in Herod's jealous wrath. 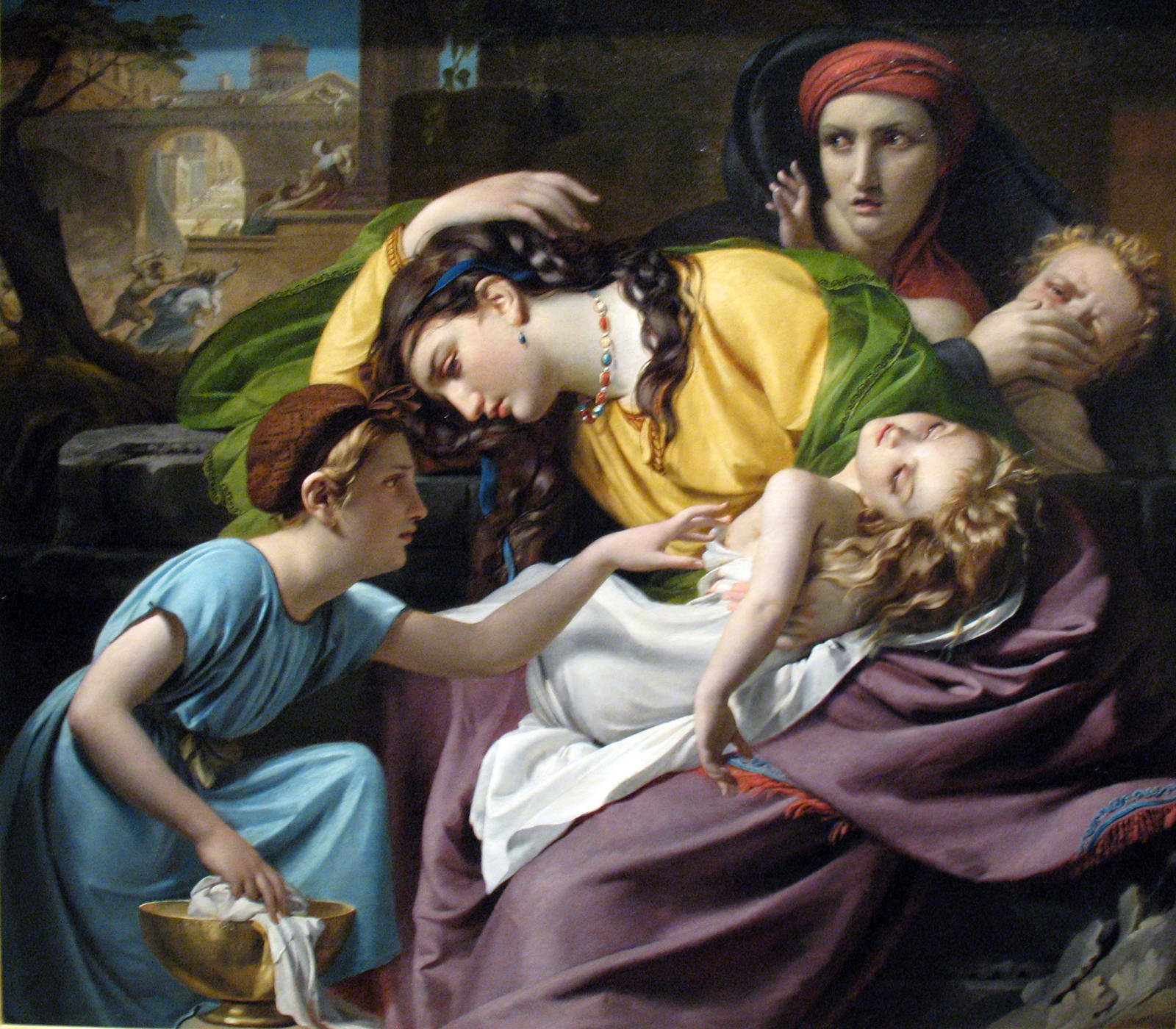 Massacre of the Holy Innocents
by Francis Joseph Navez 1

The slaughter continues as Herod's soldiers surround Bethlehem and the neighboring vicinity. Terrified parents and their children desperately seek hiding places, and the means to flee the region, to avoid Herod's edict to kill each male child two years of age and under. It is impossible to tell how many of these toddlers have been ruthlessly slain. Though Bethlehem is a only a small town, it was filled with pilgrims from the Tribe of Benjamin journeying to their ancestral home to fulfill the requirements of Herod's census decree.

However, this is not the first of Herod's acts of madness. The ambitious and jealous prince of Israel had previously sacrificed part of his council, his virtuous wife Mariamne, with her mother Alexandra, the two sons he had by her, the heirs to his crown, and all his best friends.2

Hearing of the birth of the long-prophesied Messiah, Herod requested that the visiting Magi return to Jerusalem so that he could also go and worship the child. However, the Magi did not obey Herod's command and returned to their homeland by another route. His authority snubbed, and feeling betrayed, Herod commanded this latest act of savagery in a desperate attempt to preserve his throne against the child Messiah who he perceived as a threat to his temporal kingdom. The tyrant was disturbed beyond measure and resolved to kill the child, even to the point of a massive vendetta.

It has been said that Rachel, the ancestress of the three tribes, Ephraim, Manasseh, and Benjamin, figuratively weep as the prophesy of Jeremiah was fulfilled a second time. Rachel had so desired children that she considered herself dead without them. The prophesy of Jeremiah was first fulfilled as her rebellious sons were taken into captivity in Babylon, and here she weeps again in Ramah as her descendants are viciously pierced by Herod's sword. Rama is a village not far from away from Bethlehem, where the sepulchre of Rachel resides.

Rumors and unsubstantiated reports, however, suggest then despite Herod's madness the child escaped persecution as his parents managed to flee to Egypt and avoid Herod's bloody persecution. Similar reports of the family arriving in Egypt after a long and arduous journey have been received.

In Herod we see how blind and how cruel ambition is, which is ready to sacrifice everything, even the Prophesied Savior of Israel, to its views. The tyrant lived not many days longer to enjoy the kingdom which he feared so much to lose… Not content with causing many to be put to barbarous deaths during the course of his malady, he commanded the Jews that were of the principal rank and quality to be shut up in a circus at Jericho, and gave orders to his sister Salome and her husband Alexas to have them all massacred as soon as he should have expired. (Herod died five days after he had put his son Antipater to death.)3

Yet, how different are the lives of these martyrs! These innocent victims became the spotless Lamb of God. How great is the happiness of such a death! They died for Christ, even though they were unable to know or invoke His Name. They were the flowers and the first fruits of His martyrs, and triumphed over the world without having ever known it or experienced its dangers. They received the benefit of life, made it a sacrifice to God, and by their death purchased Eternal Life. How few of these children, if they had lived, would have escaped the dangers of the world, which by its maxims and example, bear everything down before it like an impetuous torrent! What snares, what sins, what miseries were they preserved from by this grace! With what songs of praise, to all eternity, do they now thank their Saviour, and His infinite Mercy to them! … So we often lament as misfortunes many accidents, which in the designs of heaven, are the greatest mercies.4