Christian Persecution
The Reign of Nero

A generation after the death of Christ, Christianity had reached Rome … Members of this religious sect spoke of the coming of a new kingdom and a new king. These views provoked suspicion among the Jewish authorities who rejected the group and fear among the Roman authorities who perceived these sentiments as a threat to the Empire.

In the summer of 64, Rome suffered a terrible fire that burned for six days and seven nights consuming almost three quarters of the city. The people accused the Emperor Nero for the devastation claiming he set the fire for his own amusement. In order to deflect these accusations and placate the people, Nero laid blame for the fire on the Christians. The emperor ordered the arrest of a few members of the sect who, under torture, accused others until the entire Christian populace was implicated and became fair game for retribution. As many of the religious sect that could be found were rounded up and put to death in the most horrific manner for the amusement of the citizens of Rome. The ghastly way in which the victims were put to death aroused sympathy among many Romans, although most felt their execution justified.

The following account was written by the Roman historian Tacitus in his book Annals published a few years after the event. Tacitus was a young boy living in Rome during the time of the persecutions.

"Therefore, to stop the rumor [that he had set Rome on fire], he [Emperor Nero] falsely charged with guilt, and punished with the most fearful tortures, the persons commonly called Christians, who were [generally] hated for their enormities. Christus, the founder of that name, was put to death as a criminal by Pontius Pilate, procurator of Judea, in the reign of Tiberius, but the pernicious superstition - repressed for a time, broke out yet again, not only through Judea, - where the mischief originated, but through the city of Rome also, whither all things horrible and disgraceful flow from all quarters, as to a common receptacle, and where they are encouraged. Accordingly first those were arrested who confessed they were Christians; next on their information, a vast multitude were convicted, not so much on the charge of burning the city, as of "hating the human race."

"In their very deaths they were made the subjects of sport: for they were covered with the hides of wild beasts, and worried to death by dogs, or nailed to crosses, or set fire to, and when the day waned, burned to serve for the evening lights. Nero offered his own garden players for the spectacle, and exhibited a Circensian game, indiscriminately mingling with the common people in the dress of a charioteer, or else standing in his chariot. For this cause a feeling of compassion arose towards the sufferers, though guilty and deserving of exemplary capital punishment, because they seemed not to be cut off for the public good, but were victims of the ferocity of one man."1 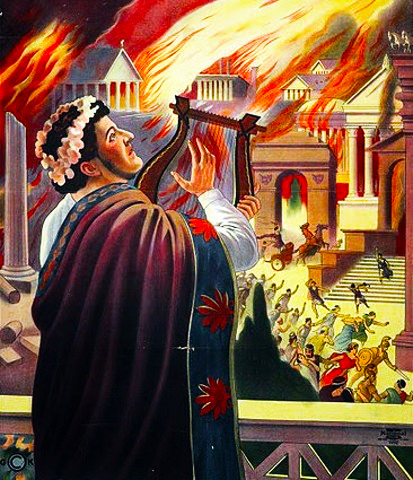 Out of the 54 emperors who ruled between 30 and 311, only about a dozen went out of their way to persecute Christians. It has been calculated that between the first persecution under Nero in 64 to the Edict of Milan in 313, Christians experienced 129 years of persecution and 120 years of toleration and peace.2