The One You Feed 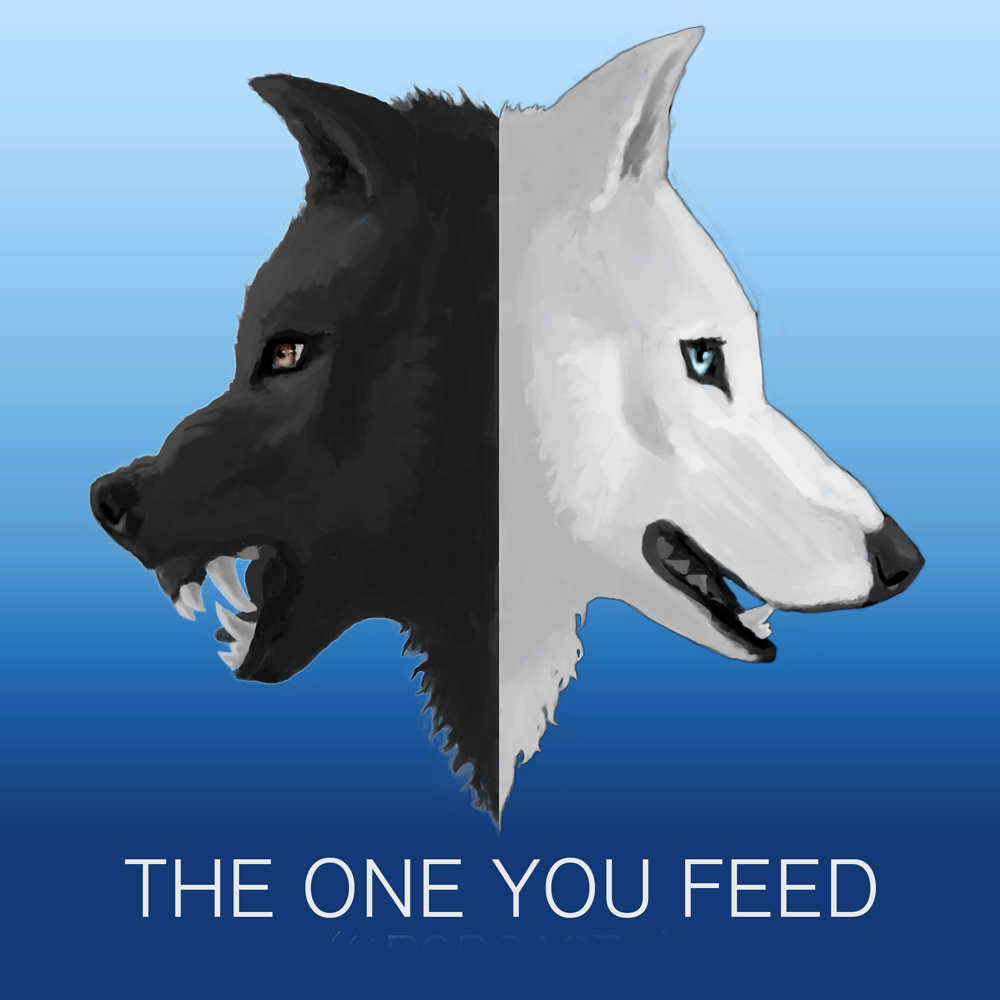 The One You Feed 1

In the Gospel reading Jesus is on His way to Jerusalem. He tells His disciples that He must suffer, be killed, and on the third day be raised. But, Peter interrupts saying, “God forbid, Lord! No such thing shall ever happen to you.” 1 But Jesus replies, “[Peter,] You are thinking not as God does, but as human beings do.” 2

Peter only wants to protect Jesus, but he cannot conceive that the Messiah, the Son of God, could fall victim to His political adversaries. But in the coming events, as Jesus is taken prisoner, condemned, and crucified, Peter's transformation begins. And after Jesus' Resurrection, the Peter that emerges is a very different man: humbled by his failure and transformed by the Cross. No longer is he the boisterous and impetuous disciple. Rather, he is the gentle, patient, and fatherly leader of Christ's Church.

In his letter to the Romans, St. Paul says, “Do not conform yourselves to this age but be transformed by the renewal of your mind, that you may discern what is the will of God, what is good and pleasing and perfect.” 3

This is one of my favorite passages in the Bible. It reminds me that my primary duty, as a follower of Christ, is to constantly develop my spiritual life: to seek and understand Divine Truths, to think as God thinks, to discern the Will of God, and love my neighbors as God loves me.

Biblical scholar and author, Warren Wiersbe, in analyzing the writings of St. Paul, tells us that we are transformed if we allow the Spirit to reveal Christ to us.4 He compares the Word of God to a mirror. “When the people of God look into the Word of God, and see the glory of God, the Spirit of God transforms them to be like God's Son It is only when the believer is thus dedicated to God that he can know God’s will for his life.”5

Hopefully, we all want to know the will of God. Hopefully, we all want to offer a good, pleasing and perfect sacrifice to our Lord. But, to do so, usually requires a change of perspective. It requires a renewal, a transformation of our minds. Peter was transformed in humility and forgiveness, and he came to see God's Hand in his own failure. However, Peter's denial of Christ did not end in defeat, rather it became a source of strength and trust. Our Lord said, “Behold, I make all things new.” 6 From that point forward, Peter was guided by the Will of God, lived fully in God's Will, and he saw the Cross in very different terms.

Paul, not only, advises us to maintain our lives in the Spirit, by renewing our minds, but warns us of present dangers. He says, “Do not conform yourselves to this age”. 7 The pressures to conform are immense, and our innate desire to belong cannot be underestimated. These forces have a profound affect on our lives. And they are not simply an aspect of our youth, but are dangers faced throughout our lives. And, the primary weapons used in the attacks on our spirituality are ridicule and rejection.

The biblical scholar, Matthew Henry, tells us that conversion and sanctification comes through the renewing of our minds, and that renewal brings about a change in the quality of our souls. As we die to sin and live righteousness, we carry on the work of our own sanctification until it is perfected in glory.8 St. Paul tells us, “Do not conform yourselves to this age” 9 Matthew Henry echos St. Paul's warning telling us that “the greatest enemy of our renewal is conformity to this world.” 10

Satan is very cunning and the pressures to incrementally abandon our faith and conform to philosophies of the day are powerful, yet very subtle. It is easy to be deceived. The type of conformity Paul speaks of is the same as Jesus saw when he said, “[they were] like sheep without a shepherd. 11 It's surprisingly easy to gradually adopt beliefs contrary to our faith in order to feel accepted, or to fulfill a sense of belonging. If we neglect our spiritual development, we become weak and vulnerable. If we cease renewing our minds, then Satan wins.

To combat the forces against us, we must heed St. Paul's warning: “Do not conform yourselves to this age.” 12 We need to fix firmly in our minds and hearts that we belong to Christ. St. Peter echos the danger we face, saying, “Be sober and vigilant. Your opponent the devil is prowling around like a roaring lion looking for (someone) to devour.” 13 Without a Shepherd, without a continual renewal of our minds, and without solid principles, we wander aimlessly and become easy prey for Satan's minions.

The pressure to conform is usually cleverly disguised. Frank Sinatra, for example, was not the first performer to jury-rig an audience. He knew that if he could get the most popular girls to scream when he came on stage then all the others would join in. Elvis Presley and the Beatles employed similar tactics. And today, a few people pierce their noses and it becomes an epidemic, a few get tattoos and it becomes a rage, a few wear a certain brand shoe and everyone has to have them. Paid demonstrators are hired to attract the lost sheep and create anarchy. And in Jesus' day, Jewish authorities salted the crowds in order to condemn Christ.

In St. Paul's time, the pressure to conform was a significant issue, though the means were more overt. In Greece and Rome there were many gods, and worship of these gods was mandatory. The services of prostitutes were often a part of their religious ceremonies, and in Roman baths homosexual acts and pedophilia were openly practiced. So, as those who heard the Good News turned to Christianity, their lives vividly contrasted with their pagan environment. Their views, their faith, was adamantly and ruthlessly opposed, and martyrdom was often the result.

Today, the pressure to conform has almost become a science, with the publication of Saul Alinsky's book, Rules for Radicals . One of the primary tactics is ridicule, where comedians, celebrities, and even presidents serve up cruel and severe attacks using humor. We laugh because it's funny, and the personalities are charming, but we know the price of opposition, the price of speaking out, is that these weapons will be turned on us.

St. Paul says, “Do not conform yourselves to this age but be transformed by the renewal of your mind”. 14 The transformation Paul references is radically different from conforming to the present age. Continually renewing our minds, continually developing our spiritual lives, forms us in core principles, and these principles will sustain us regardless of the threats we face. Conformity focuses on temporary values. Transformation seeks absolute and eternal truth. St. Paul says, “we look not to what is seen but to what is unseen; for what is seen is transitory, but what is unseen is eternal.” 15

One of the many dangers of conformity is 'Willful Ignorance'. Some have termed this the 'Dumbing Down of America'. Willful Ignorance intentionally ignores history. It refuses any objective examination because it prefers the lie. And in the lie, unreasonable and irrational behavior are legitimized. Some theologians have described willful ignorance as the gravest of sins.

'Willful Ignorance' has even infected the Catholic Church, as many have left the faith. Rather than trying to understand Catholic moral positions, those allied to 'willful ignorance' cling to their own views and preferences, and they adamantly reject more informed views. Thus, abortion becomes a choice, annulments are obsolete, contraception is a right, and opposition to same-sex marriage and transgender polices becomes bigotry and intolerance.

As Christians, but even as citizens, we must always educate ourselves to gain deeper insights and understanding, and to better counter current threats to our society and to our faith. What is needed is a constant renewal of our minds. And in this renewal, in our journey toward transformation, we experience the mind of God. We lead a holier and more purposeful life. We are more capable of discerning His Holy Will, and open our souls to the grace and healing power of God.

I'll close with a short story. Once a grandfather was talking to his grandson. The grandfather says, “There are two wolves inside all of us and they are always at war with one another. One of them is a good wolf: kind, brave, and loving. The other is a bad wolf filled with greed, hatred, and fear.” The grandson thinks for a while then asks, “Grandpa, which one wins?” The wise grandfather replies, “The one you feed.”

The biblical scholar, William Wiersbe once said, “Every Christian is either a conformer, living for and like the world, or a transformer, daily becoming more like Christ.” 16 The choice is ours. Immobility is not an option. Neglect only leads to decay. The time has come to embrace the world, or to feed our souls. In which direction shall we go? Which wolf will you feed?