Small in Stature, A Giant in Faith

Homily for the 18th Sunday in Ordinary Time, Cycle A

The account of the 'Multiplication of the Loaves and Fish' occurs in all four gospels. And, there are an abundance of events in Sacred Scripture which are precursors to this event; actions which show the abundance of God's generosity, and prepare us for the Institution of the Holy Eucharist which will later be revealed at the Last Supper. We may recall the Manna, which fed the Israelites in the Exodus; and the widow of Zarephath, whose oil and flour lasted through the famine; and Elisha, through whom, God multiplied twenty loaves of bread to feed over one-hundred men. [The loaves were small pieces of bread about the size of Pita bread. Five loaves and two fish was enough to feed two people. ] 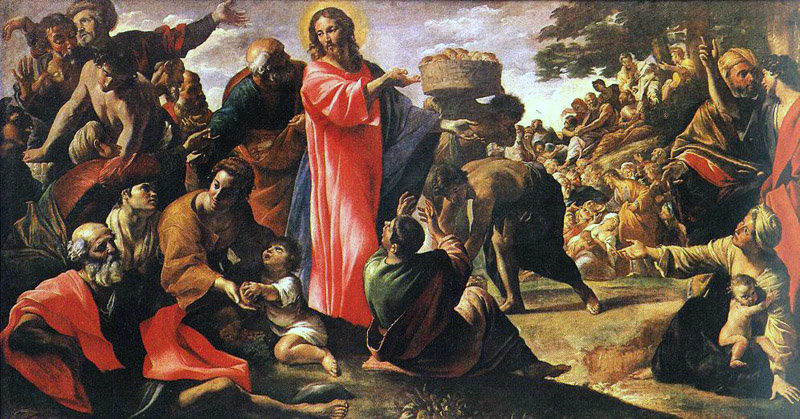 The Miracle of the Loves and Fishes
Artist: Giovanni Lanfranco 1

In all four gospel accounts, the essential facts are the same. However, there are some important nuances - differences which add a further dimension. Only in the Gospel of John, for example, are we told that the Feast of the Passover was near. John was the last gospel written, and the most theological of the gospels. In the telling of this event John reveals a definitive connection between Passover and the Holy Eucharist.

Another significant difference involves how the idea of feeding the five-thousand originated. In the gospel of Matthew, Mark, and Luke, it was the disciples who approached Jesus. Although they are called Apostles in earlier chapters of Matthew, here they are referred to as 'the disciples'. The distinction lies in their roles. The term 'Apostle' denotes a representative or someone who was sent. The term 'disciple' refers to an apprentice, or a student. Here, the Twelve are clearly students.

In Matthew, Mark, and Luke, out of concern and compassion, the disciples approach Jesus and ask Him to, “dismiss the crowds so that they can go to the villages and buy food for themselves.” 2 . The people, in their eagerness left in haste to follow Jesus, without bringing any provisions for the day. Now, it was getting late in the day and they were in a desolate place.

However, in the Gospel of John, it was Jesus who initiated the discussion. He asks Phillip, “Where can we buy enough food for them to eat?”3 John states that Jesus was testing the disciples. It is left to the reader to determine the nature of the test, but clearly the disciples responded in disbelief saying, “Two hundred days wages … would not be enough for each of them to have a little.”4

As the account is brief, both origins may have occurred, but were simply recorded differently. Merging the gospel accounts is like asking two or more witnesses about the sequence of events, and though they agree on the essential facts, one may have witnessed or noticed some nuance that the other didn't. Or, perhaps, the gospel authors chose to emphasize different aspects of the same event.

Faced with the problem of feeding so many, the disciples evaluated the situation, and responded in purely logistical terms. They do not see Jesus' question as an opportunity to exercise their faith, or to call upon Jesus for help. The reaction of the disciples is understandable and we would likely respond in the same way. But, Jesus is not calling them to a logistical evaluation. He is not asking them to address the entirety of the situation, or provide an all encompassing solution. Rather, He is calling them to a new vision of faith – a vision which would transform their understanding of their future mission as Apostles.

The source of the loaves and fish, another difference, is, also, significant. In the Gospels there are two explanations. In Matthew, Mark, and Luke, it is the disciples who bring the loaves and fish to Jesus saying, “Five loaves and two fish are all we have here.”5 Some scholars and historians suggest that this represents a liturgical view which was very important in the early Church. It emphasized the role of the priests to bring Christ's gifts to us in the Sacraments.

However, in the gospel John, it is a young boy who brings the loves and fish to Christ. John is the only gospel author who calls our attention to the boy. It is logical, therefore, that John had first hand knowledge of the boy. And, that knowledge may have not been available to the other gospel authors. Or, another explanation may be that the boy's role was not viewed with the same significance, or was tangential to their purpose.

So, who was the boy? We know that John doesn't always identify someone by name. For example, he refers to himself as the 'disciple whom Jesus loved'. He does this so we can place ourselves into the story, and see ourselves as the disciple that Jesus loves. In the text he is simply referred to as 'a boy'. John invites us to see the problems we face with the faith of this boy.

In all four of the Gospels, the disciples evaluated the circumstances, looked at the enormity of the situation, and deemed it unsolvable. The problem was too large. To feed so many was a task beyond their means and beyond their ability. They saw the impossibility, and were so overwhelmed, that they did nothing. And this was likely the test that Jesus had in mind. This was likely what Jesus wanted to teach the disciples. Contrary to the reaction of the disciples, the boy's response was quite different. He heard that the people had no food, and brought what little he had to Jesus.

Last week we heard Jesus tell us the parable of the mustard seed: the smallest of seeds that becomes the largest of plants. The five loaves and two fish are like the mustard seed. They cannot feed the five thousand. But look at what happened. In bringing what he had to Jesus, the young boy's heart-felt response not only fed five thousand men, but a multitude of women and children as well. And there were twelve baskets left over. And, each of these baskets was spiritually entrusted to an Apostle, who was sent to feed the lost children of Israel.

In our society, particularly today, we face many problems - enormous and complicated problems in highly turbulent times– and many of our leaders babel about global solutions while trying to protect their power. However, even our Lord, the creator of all, did not attempt to solve all the world's problems. That was not His Mission. Neither does He expect us to do so. What He expects is for us to respond in love and build relationships. Our role is to plant the tiny mustard seeds of faith, trusting that God will bring forth the harvest. We are called to be like that boy that will forever be remembered as the boy who gave his lunch to Christ. Though small in stature, and overlooked, he stands as a giant in faith.