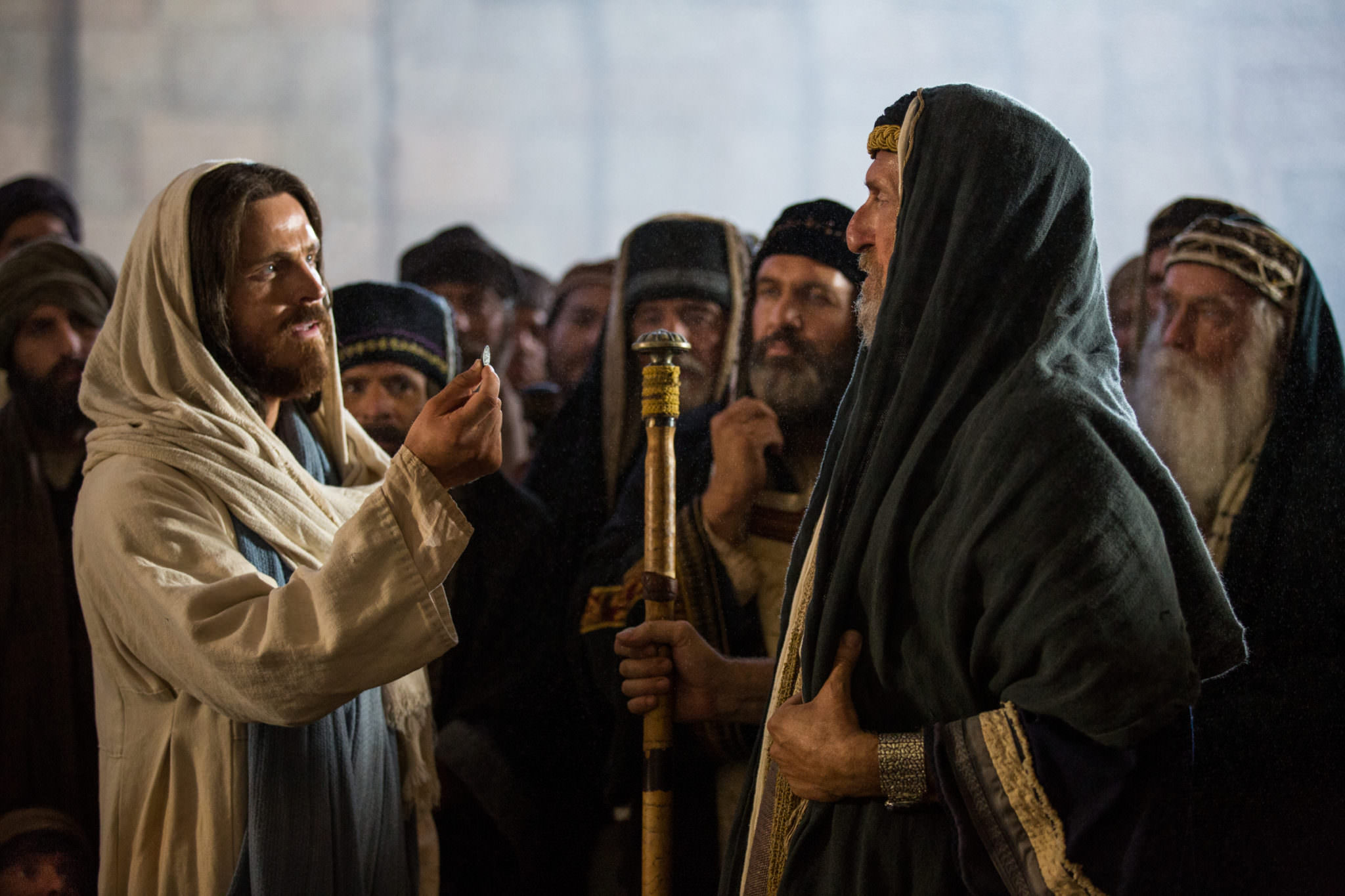 Jesus and the Pharisees
Illustration by: Unknown 1 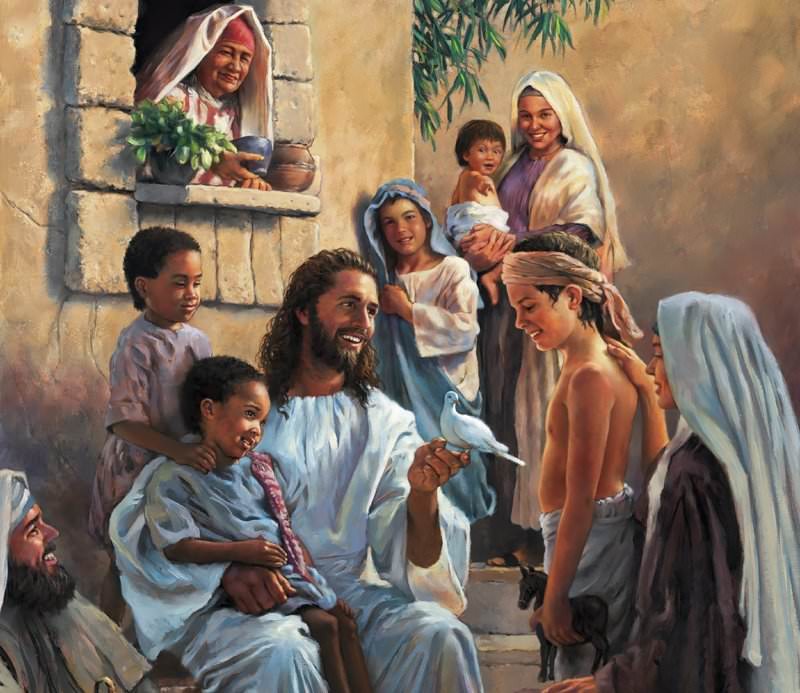 Jesus with the Children
Illustration by: Georgy N Joseph 1

In the first reading we read about the creation of marriage as God intended, where a man and woman are joined together to become one - joined in a permanent earthly bond - a bond that endures until we enter eternal life and are joined with Christ in a Feast much like a Wedding Feast. Jesus' conversation with the Pharisees highlights how far marriage had devolved from what it was originally intended to be. And, for us today, it causes us to reflect on the rampant divorce rate in what is called a civilized society.

The Pharisees approached Jesus on a matter of the law - the law which they knew well and used to their advantage. They asked, “Is it lawful for a husband to divorce his wife?” 1 This occurred at a time when King Herod Antipas divorced his wife, and married Herodias, the wife of his brother Phillip. Their scheme was to get Jesus to condemn divorce. That would certainly anger Herodias, and may prompt Herod to rid himself of Jesus, just as he did John the Baptist. This is just one of many of incidents in which the Pharisees attempted to spark a conflict with Jesus, gather evidence to condemn Him, and to stir up controversy between the various sects of Judaism.

In Mosaic law, particularly in the Book of Deuteronomy, there were many rules governing marriage, divorce, remarriage, dowries, and recompense. In order for a man to divorce his wife, presumably for some perceived indecency, he needed only to write a bill of divorce and present it to her in the presence of two witnesses. This allowed husband and wife to separate and legally remarry. Thus, because of the hardness of their hearts, Mosaic law established loopholes sidestepping the permanent nature of marriage.

In ancient society, a man could have many wives. Jacob for example had two wives and two concubines. King David had seven wives, and Solomon had over seven-hundred wives and three-hundred concubines. Most of Solomon's marriages were political – intended to establish peaceful relationships, and to avoid wars with rulers and kings of other nations. Marriage had become a mockery of its original intent, just as it has become for many today.

In His response, Jesus takes the culture from where it was to where it needed to be. "He challenged the assumption of the Pharisees that just because something is legal or permitted, that it is the will of God."2 Sadly today, many think that if something is legal then it is right. The entire process of growing in wisdom and virtue involves following Jesus as He takes us from where we are to where we need to be.

Divorce, while necessary in extreme cases, is not a sin, but it is certainly a tragedy. “It is an escape hatch to reduce the destructive effects of hardened hearts."3 Jesus meets the Pharisees on their own ground, responding in legal terms. However, He “moves the discussion from Deuteronomy to Genesis -- from Moses to God -- from divorce to marriage -- from that which is permitted, to that which was intended. ... He moves it to an even more foundational authority, citing God's original intent that man and woman become 'one flesh.'”4 Jesus is calling the Pharisees to a higher vision. He wants us to share that vision, and conduct ourselves according to His will, so that we might be a blessing to our families, our neighbors, and even to ourselves.

The Pharisees' intent here is to trap Jesus. Having worked with annulments for almost twenty years, it has been my responsibility to examine many failed marriages. In the overwhelming majority, the marriage had problems before it ever began – problems that were overlooked or ignored. Some marry thinking that all will be sweetness and flowers. Some believe that no matter how dire the circumstances, love will carry the load. Most fail to truly get to know their intended spouse, and perhaps more important, they fail to critically observe their intended's family relationships. They believe they are starting out new, and do not fully understand that those family relationships, attitudes, habits, and interactions, for better or worse, will become an integral element in their own marriage.

A young woman once told me that she married her best friend. That is generally a good omen for a successful marriage. However, due to the financial irresponsibility and the immaturity of her spouse, the marriage failed. Marriage is far different from a friendship. In a friendship, and most premarital relationships, there is little or no shared responsibility. While some may have an attraction to a person's status or physical attributes, marriage has to be based on moral integrity and character. Those who enter into marriage based primarily on love, hope, and attraction often end up trapping themselves. That love, that was so consuming, over time becomes hardness and indifference. Some spend more time finding the right pair of shoes, or researching the right car, than they do in selecting the right spouse. Even in the best of circumstances, with the best preparation, and the best of intent, God must be central in a marriage in order to have any chance at all.

In the eyes of God, and the eyes of the Church, marriage is permanent. A civil divorce is simply a document that separates legal obligations such as finances, child custody, and property. A civil divorce does not dissolve marriage. Many people think an annulment is simply a Catholic divorce. That is not the case. They couldn't be more wrong. A marriage covenant cannot be set aside unless it can be proven that it was an invalid marriage. The Church does not dissolve marriages, but only rules on their validity. And for this to occur, the Church must act with moral certainty.

The hardness of heart that caused Moses to allow divorce was a fact of life in Jesus' day, and is still a fact of life today. So, to the Pharisees, Jesus states, “Do not think that I have come to abolish the law or the prophets. I have come not to abolish but to fulfill.” 5 Jesus came to bring the law to perfection – to restore Our Heavenly Father's intent, and to lead us to holiness. One of the principles purposes of marriage is for husband and wife to assist one another in their salvation.

In the second story in today's gospel, people are bring their children to Jesus, but the disciples are chasing them away. In Jesus day, there were very few means of mass communication. To hear the news, people would often send their children to the homes of their neighbors, and then quiz about what they saw and heard. Thus, children were often used as spies.

The disciples, fearful that the children were spies sent by the Pharisees to gather information against Jesus, chased them away. But, Jesus rebuked them and said, “Let the children come to me; for the kingdom of God belongs to such as these.”6

The juxtaposition of this teaching about children with that about marriage makes us confront not only what divorce does to an abandoned partner, but also what it does to children. So many young adults are lost today, grasping at philosophies of the moment, in order to feel accepted and to belong. Such behavior has been psychologically and statistically traced to the wreckage of their parent's marriage and to the dysfunctional nature of their home life. So, I'll put the question to you, on what basis will your children, and your children's children, select a spouse? In general, this is an area where parental education and spiritual discernment are sorely lacking.

The main purpose of this second story, however, is not the children as such. Rather it focuses on the kind of people who may enter the Kingdom of God. People brought their sick, so that Jesus might touch and heal them. And, like the woman with a hemorrhage, they wanted to touch His garments. But there is a highly important and subtle change here. It's almost imperceptible. Yes, the people came to Jesus to be healed, but now they also came for His Blessing. - thus recognizing and seeking the Holiness of His Life. Of all the virtues, holiness is perhaps the most attractive and should be the most desired quality in an intended spouse.

Everything in Jesus ministry points to His attention to the powerless and most vulnerable. As children, we come to Him with empty hands and trusting hearts. All of us are totally dependent on God's grace. Sacred Scripture tells us, "And He took them up in His arms, laid His hands on them, and blessed them".7 Jesus tells us, that we must come to Him as a child – with a childlike faith, obedience, and trust. He tells us to be as “wise as serpents, and harmless as doves.”8 These are the ones who will enter the Kingdom of God and be welcomed at the Wedding Feast.

Who can guess, who can imagine, what wonderful things will happen when our childlike hearts, and the hearts of our children, touch Jesus and are taken into His arms!