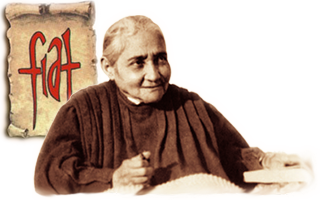 One of the more recent private revelations of the Passion, comes through a person recently declared "Servant of God' and now being considered for sainthood, Luisa Piccarreta, who Jesus called' The Little Daughter of the Divine Will'.

Luisa's spirituality centered on union with the Will of God. Luisa Piccarreta was born in Corato in the Province of Bari, Italy on 23 April 1865…She received only a first grade education. As a teenager she became a member of the Third Order of Saint Dominic. As an adult, she took up lace-making. As of 1889 she became bedridden.

In February 1899, her spiritual director asked her to begin a diary of her spiritual experiences, which she continued until 1938. Her writing ran to thirty-six volumes. In 1926, Annibale Maria di Francia was in Trani to open branches of his newly established institutes; he asked her to write her autobiography. She died of pneumonia on 4 March 1947 at the age of 82.

Luisa from her very birth was given a mystical life, for example, at the age of 17 she received the Mystical Union that Saint John of the Cross, Saint Teresa of Avila and Saint Catherine of Siena received right before they died. After this mystical Union Jesus asked Luisa if she would stay in bed and because of her “Fiat!”, He taught Luisa about the Life of the Divine Will, forming It first in her.

For the next 64 years until her death Luisa stayed in bed basically not eating, drinking or sleeping. Luisa was nourished by receiving the Most Holy Eucharist during the Holy Sacrifice of the Mass daily said in her room. This special blessing was given by Pope Saint Pious X and Pope Leo XIII his predecessor. Luisa also lived on the food of the Divine Will, which Jesus said in the Gospels, “a food that you do not know of….”

During that time through great sufferings and a sublime call to holiness Jesus taught Luisa about the fulfillment of the Our Father, the prayer that Jesus taught His Apostles. Jesus taught Luisa that now is the time for the Kingdom of God to reign on earth as in Heaven. Jesus dictated 36 Volumes of the doctrine of the Divine Will, which He gave the title “The Kingdom of the Fiat in the Midst of Creatures. Book of Heaven – The Recall of the Creature into the Order, to Its Place and into the Purpose for Which He was Created by God”, to teach Luisa how to “Live” in the Divine Will. This is different than the devotional life of the Saints which is “doing” the Will of God.

In humble obedience Luisa, under the constant direction of the Church, faithfully wrote all that Jesus Himself wanted her to put down on paper. This would be not only for herself but for those who would read it, so that they too could “Live” in the Divine Will as Luisa learned how to “Live” in the Divine Will, by putting into practice these “Truths” taught by Jesus and Mary.

Pope John Paul II canonized St. Annibale and declared him to be the Saint for our time to pray for Vocations.2