The Seraphim (singular "Seraph"), mentioned in Isaiah 6:1—7 , serve as the caretakers of God's throne and continuously singing his praises: "Holy, holy, holy is the Lord of hosts. All the earth is filled with His Glory." It is said that they surround the throne of God, singing the music of the spheres and regulating the movement of the heavens as it emanates from God. It is also said that such a bright light emanates from them that nothing, not even other divine beings, can look upon them. It is said that there are four of them surrounding God's throne, where they burn eternally from love and zeal for God. The Seraphim have six wings; two covering their face, two covering their feet, and two that they fly with. Unlike other Seraphim who had six wings, Lucifer was featured to have twelve wings, which further exemplifies the regard to which God gave him above all the other angels prior to his fall. 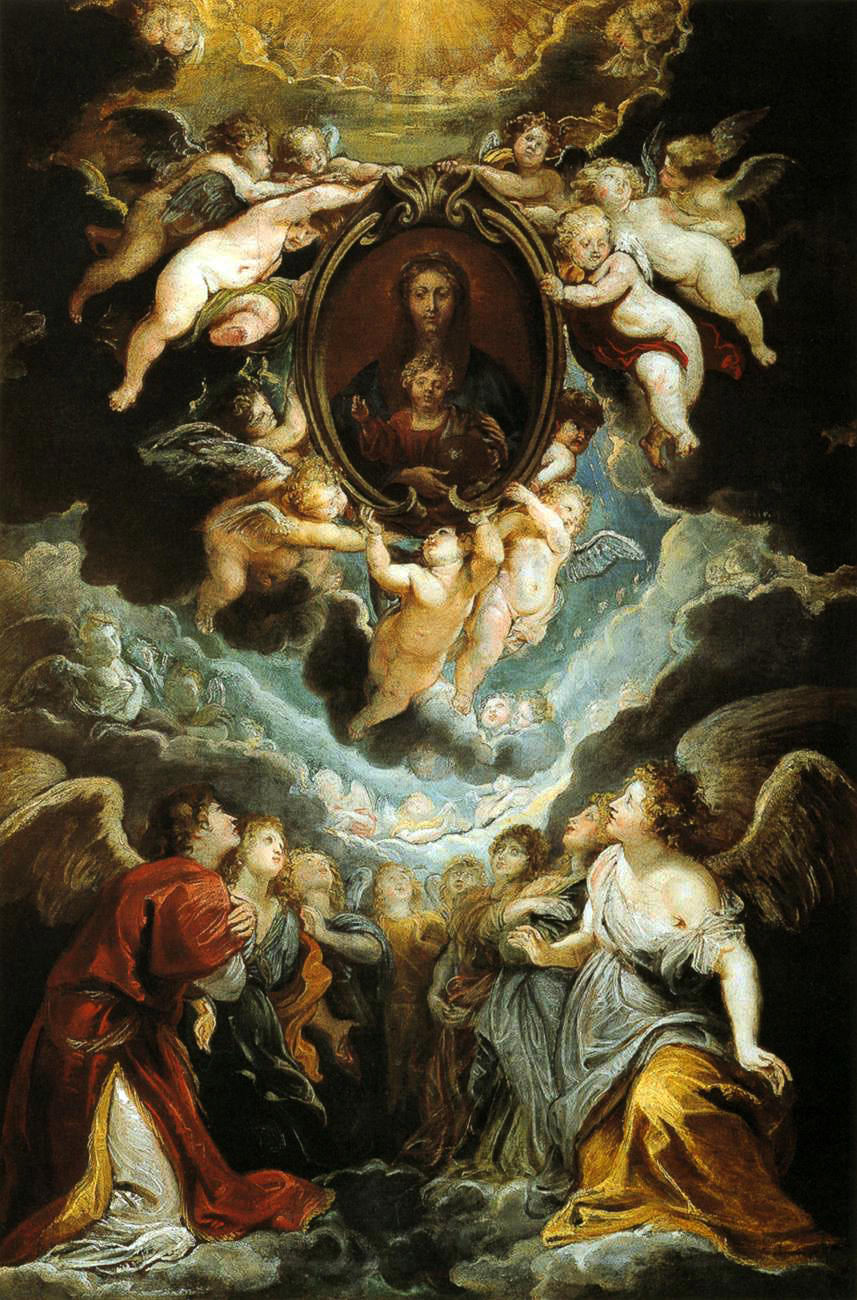 The Ophanim (Heb. owphan: Wheels, also known as Thrones, from the vision of Daniel 7:9) are unusual looking compared to the other celestial beings. They appear as a beryl-colored wheel-within-a-wheel, their rims covered with hundreds of eyes. They are closely connected with the Cherubim: "When they moved, the others moved; when they stopped, the others stopped; and when they rose from the earth, the wheels rose along with them; for the spirit of the living creatures [Cherubim] was in the wheels." (Ezekiel 10:17). In Esoteric Christianity they are called Lords of Flame. De Coelesti Hierarchia refers the Thrones (from the Old Testament; Ezekiel and Daniel visions of the Thrones/Wheels) as the third Order of the first sphere, corresponding to the description of the Ophanim; the other two superior orders being the Cherubim and Seraphim. Thrones "because of the brilliant luminosity of their bodies and their great spiritual powers.", corresponding also to the description of the Ophanim; the other two superior hierarchies being also the Cherubim and Seraphim. According to this esoteric Christian teachings, these three Hierarchies have already reached liberation, thus no longer active in the work of evolution. 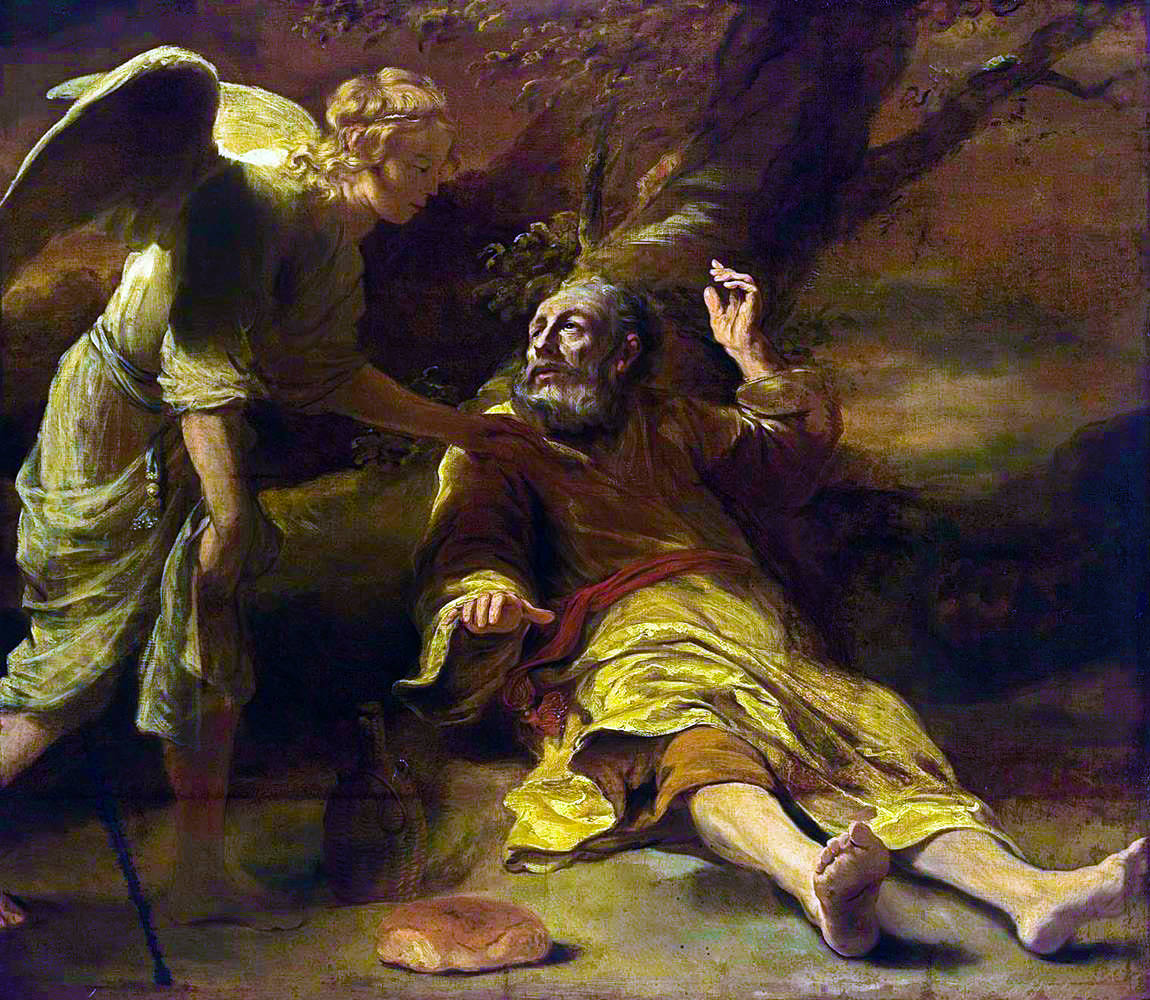 Elijah Fed by an Angel
by Ferdinand Bol2 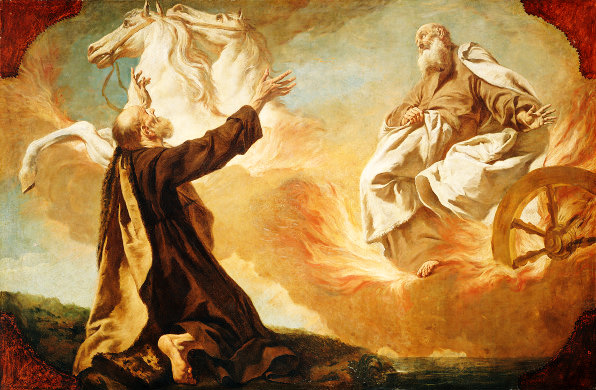 Elijah Taken Up In A Chariot
by Giuseppe Angeli3

The Cherubim (singular "Cherub") are beyond the throne of God; they are the guardians of light and of the stars. It is believed that, although they are removed from man's plane of reality, the divine light that they filter down from Heaven still touches the lives of living things. They have four faces: one of a man, ox, lion, and eagle. The ox-face is considered the "true face", as later on in Ezekiel the ox's face is called a cherub's face (Chapter 10). They have eight conjoined wings covered with eyes, and they have ox's feet. Cherubim are considered the elect beings for the purpose of protection. Cherubim guard Eden and the throne of God. Their rank among angels is uncertain but they are always categorized in the First Sphere. Some believe them to be an order or class of angels; others hold them to be a class of heavenly beings higher than angels. Cherubim are said to have perfect knowledge of God, surpassed only by the love of the Seraphim. The Cherubim are mentioned in Genesis 3:24 ; Ezekiel 10:17–20 ; and 1 Kings 6:23–28 . 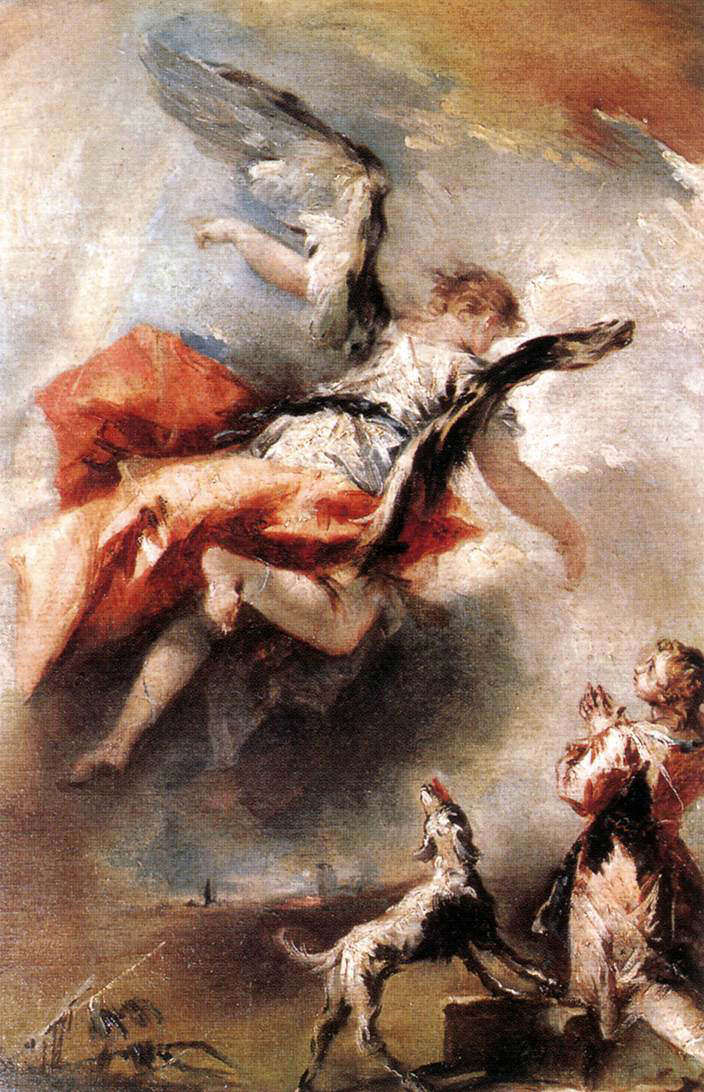 The Angel Appears to Tobias
by Gianantonio Guardi4