St. Michael is one of the principal angels; his name was the war-cry of the good angels in the battle fought in heaven against the enemy and his followers. Four times his name is recorded in Scripture:

Regarding his rank in the celestial hierarchy opinions vary; St. Basil (Hom. de angelis) and other Greek Fathers, also Salmeron, Bellarmine, etc., place St. Michael over all the angels; they say he is called "Archangel" because he is the prince of the other angels; others (cf. P. Bonaventura, op. cit.) believe that he is the prince of the seraphim, the first of the nine angelic orders. But, according to St. Thomas (Summa Ia.113.3) he is the prince of the last and lowest choir, the angels. The Roman Liturgy seems to follow the Greek Fathers; it calls him "Princeps militiae coelestis quem honorificant angelorum cives". The hymn of the Mozarabic Breviary places St. Michael even above the Twenty-four Elders. The Greek Liturgy styles him Archistrategos, "highest general" (cf. Menaea, 8 Nov. and 6 Sept.).1 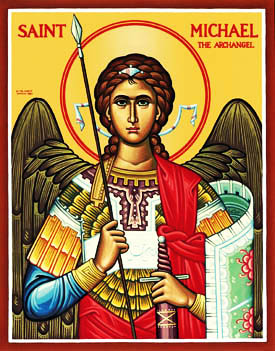 Saint Michael, the Archangel,
defend us in battle. Be our defense against the wickedness and snares of the devil.

May God rebuke him, we humbly pray.
And you, Oh Prince of the Heavenly Host, by the power of God, thrust into Hell, Satan and the other evil spirits, who prowl the world for the ruin of souls. 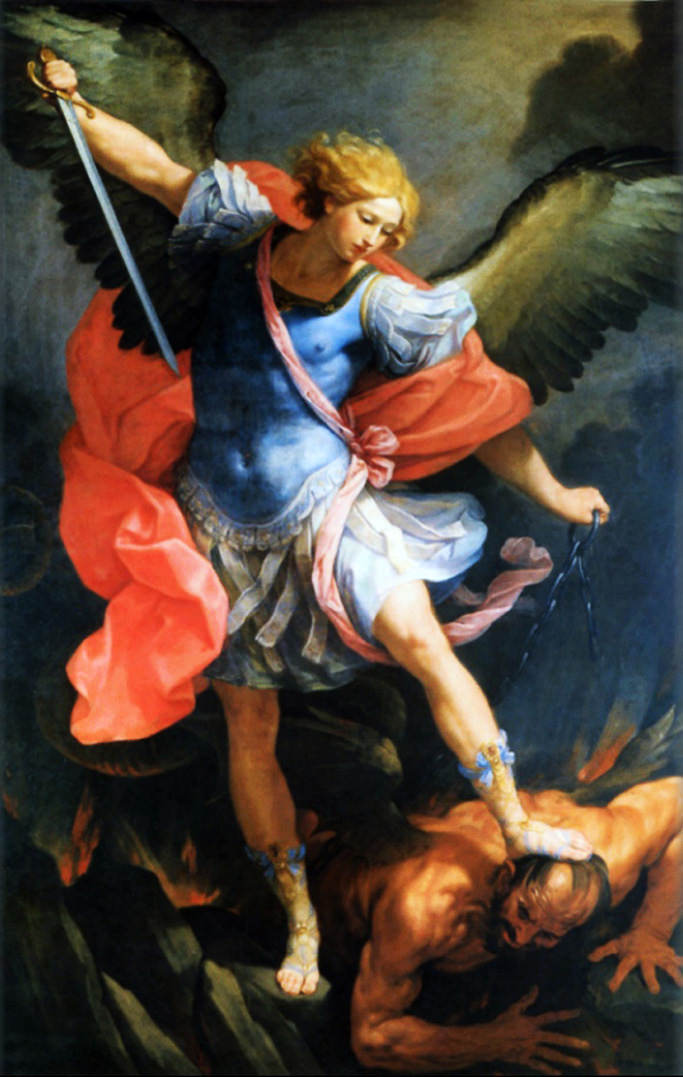 Micheal the Archangel
by Guido Reni2 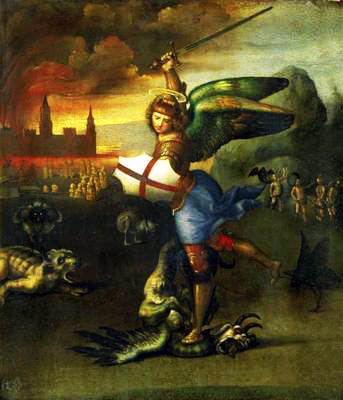 The Chaplet of Michael, the Archangel

The history of this Chaplet goes back to a devout Servant of God, Antonia d'Astonac, who had a vision of Michael, the Archangel. He told Antonia to honor him by nine salutations to the nine Choirs of Angels. St. Michael promised that whoever would practice this devotion in his honor would have, when approaching Holy Communion, an escort of nine Angels chosen from each of the nine Choirs. In addition, for those who would recite the Chaplet daily, he promised his continual assistance and that of all the holy Angels during life.

The Chaplet of Saint Michael, the Archangel

O God, come to my assistance. O Lord, make haste to help me. Glory be to the Father, etc.

Note: Say one Our Father and three Hail Marys after each of the following nine salutations in honor of the nine Choirs of Angels.

Note: Say one Our Father in honor of each of the following leading Angels: Michael, the Archangel, St. Gabriel, St. Raphael and our Guardian Angel.

O Glorious Prince Michael, the Archangel, Chief and Commander of the Heavenly Hosts, Guardian of Souls, Vanquisher of Rebel Spirits, Servant in the House of the Divine King and our Admirable Conductor, you who shine with excellence and superhuman virtue deliver us from all evil, who turn to you with confidence and enable us by your gracious protection to serve God more and more faithfully every day.

Pray for us, O Glorious Michael, the Archangel, Prince of the Church of Jesus Christ, that we may be made worthy of His Promises. Almighty and Everlasting God, Who, by a prodigy of goodness and a merciful desire for the salvation of all men, has appointed the most glorious Archangel Michael, the Archangel, Prince of Your Church, make us worthy, we ask You, to be delivered from all our enemies, that none of them may harass us at the hour of death, but that we may be conducted by him into Your Presence. This we ask through the merits of Jesus Christ Our Lord. Amen.2