Ancient Document Details
the Arc of the Great Flood

Jan. 25, 2014, A recently deciphered 4,000-year-old tablet from ancient Mesopotamia purportedly contains the specifications for an ark to endure a great flood — and it predates the Biblical story of Noah. It describes a huge vessel, two-thirds the size of a soccer field, with high walls and made with so much rope that “stretched out in a line would reach from London to Edinburgh.”

The tablet — subject of a new book titled, “The Ark Before Noah” — was put on display Friday at the British Museum and is claimed by the museum’s assistant keeper of the Middle East, Irving Finkel, to be “one of the most important human documents ever discovered.”

Finkel said he received the tablet several years ago from a man who said his father had acquired it in the Middle East.

“This tablet, however, turned out to be one in a million,” he said in a blog post.

David Owen, professor of ancient Near Eastern studies at Cornell University, told Fox News it was an “extraordinary discovery.”

Irving Finkel, curator in charge of cuneiform clay tablets at the British Museum, speaks to the media during the launch of his book ‘The Ark Before Noah’ at the British Museum in London, Friday, Jan. 24, 2014. (AP Photo/Sang Tan). But, while the tablet describes an ark strikingly similar to Noah’s and would be designed to save two of each animal, the tablet specifies a circular vessel, not a rectangular ark.

“It was really a heart-stopping moment — the discovery that the boat was to be a round boat,” said Finkel, according to Fox News. “That was a real surprise.”

Finkel added that a circular vessel would be a “perfect thing,” because it “never sinks, it’s light to carry.” He also contends that his discovery does not provide evidence supporting the Biblical story of Noah’s ark, instead saying the tale was likely passed down from Babylon.1 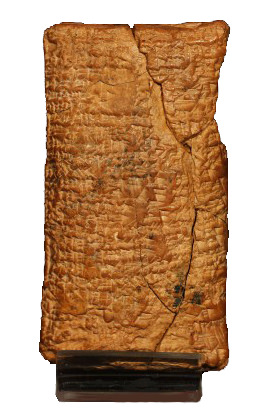