According to the Bible, evil behavior in man is the result of his sinful nature … The leftist progressives naturally reject this explanation which, to them, is little more than mythology and fairy tale. To these leftists, there is no God and man is merely an animal, a product of evolution, neither innately good nor evil. The causes of evil, they claim, are ignorance, poverty and social injustice, and once these are eliminated, a just, crime-free, utopian society can emerge.1

Efforts to establish a utopian society have occurred throughout history. In all cases, however, establishing a utopian society has been an illusion created for mass consumption. The 'master race' of the Nazi's, Castro's revolution in Cuba, and the assault against Catholicism in Mexico which led to the Cristeros movement are vivid examples. The real object of such movements is, and always has been, a thirst for absolute power, and man's individual and collective freedom is always the first fatality."

Read More About It

The Biden/Obama Administration is using their Afghanistan mess to further change the United States away from a Judeo Christian entity into a nation more to their liking... [They are] now shipping Afghans, who were lucky enough to escape their country, into swing states [they] want to turn blue. … This is exactly what Obama did before the 2016 Election.5

The path to Salvation

"But if the wicked man turns away from all the sins he committed, if he keeps all my statutes and does what is right and just, he shall surely live, he shall not die. None of the crimes he committed shall be remembered against him; he shall live because of the virtue he has practiced. (Ezekiel 18:21-22)"2

His parents took the Child Jesus into the temple, and the House of God was filled with His splendor.

After a one year study brought about by a suit to force the separation of church and state.

Had the people, during the Revolution, had any suspicion of any attempt to war against Christianity, that Revolution would have been strangled in its cradle … At the time of the adoption of the constitution and the amendments, the universal sentiment was that Christianity should be encouraged, not any one sect … in this age there can be no substitute for Christianity … That was the religion of the founders of the republic and they expected it to remain the religion of their descendants … the great vital and conservative element in our system is the belief of our people in the pure doctrines and divine truths of the gospel of Jesus Christ.2 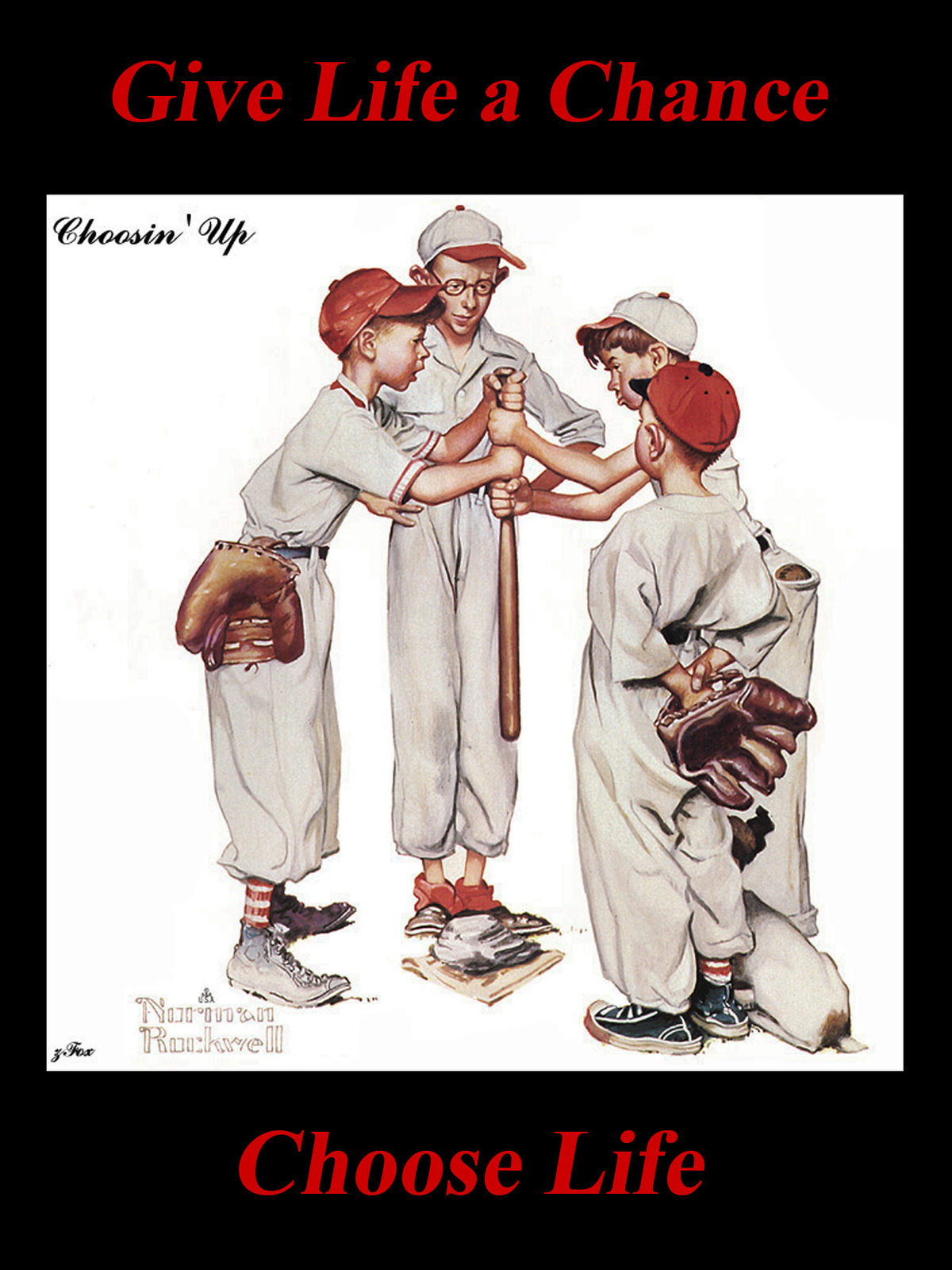 Choosin Up
by Norman Rockwell2

Excerpts from 'On Pastors'

Editors Note: Popular among many of the 'Mega Churches" is the proclamation of the Prosperity Gospel. In this view God promises to bestow his blessings, often is in terms of material goods, on those who believe.

While God does indeed bless us, and watch over us, it is important that the Christian is not mislead by promises of a more abundant material life - a life not founded on the "Rock" but built on sand - sand that will be washed away when trouble comes.

In this sermon St. Augustine puts being a true disciple, a true Christian faith, into its proper perspective, and calls pastors to truly shepherd their flock against the attacks that will surely come.

Christians must imitate Christ’s sufferings, not set their hearts on pleasures. He who is weak will be strengthened when told: “Yes, expect the temptations of this world, but the Lord will deliver you from them all if your heart has not abandoned him. For it was to strengthen your heart that he came to suffer and die, came to be spit upon and crowned with thorns, came to be accused of shameful things, yes, came to be fastened to the wood of the cross. All these things he did for you, and you did nothing. He did them not for himself, but for you.”

But what sort of shepherds are they who for fear of giving offense not only fail to prepare the sheep for the temptations that threaten, but even promise them worldly happiness? God himself made no such promise to this world. On the contrary, God foretold hardship upon hardship in this world until the end of time. And you want the Christian to be exempt from these troubles? Precisely because he is a Christian, he is destined to suffer more in this world.

Lift him up from the sand and put him on the rock. Let him be in Christ, if you wish him to be a Christian. Let him turn his thoughts to sufferings, however unworthy they may be in comparison to Christ’s. Let him center his attention on Christ, who was without sin, and yet made restitution for what he had not done. Let him consider Scripture, which says to him: He chastises every son whom he acknowledges. Let him prepare to be chastised, or else not seek to be acknowledged as a son.6

Today, since communism is still a bad word, those who want to achieve its goals but not claim its name have developed a new approach. Three new approaches, actually. One goes by the term “state capitalism.” Another goes by the term “democratic socialism.” A third is a form of critical social analysis popular in universities. Let’s look at each:

In a nutshell, state capitalism is the practice of federal governments taking ownership and management control of otherwise private businesses. The idea behind state capitalism is inherently socialistic, in spite of the use of the word capitalism. At present, Russia, China, and other nations are committed to state capitalism, but so are many American leaders. Recently, for example, the U.S. federal government has made aggressive moves in the health-care, energy, and banking sectors of the economy. Government control of the economy creates a significant justice issue because the government is so vulnerable to corruption.

The Hoover Institution’s Arnold Beichman pointed out that socialism in the former Soviet Union, rather than distributing goods equally, actually created a class known as the nomenklatura, whose members “own everything, the auto factories, the food markets, the pharmacies, the transport system, Everything.” Instead of achieving its stated goal of destroying class distinctions, socialism tends to remove competition and deposit cronyism in its place.

In Soviet times this elite class ran the economy into the ground. Will it do the same in our economy?

Bernie Sanders describes himself as a democratic socialist and forcefully argues that America would be better off if it were to substantially raise taxes on high income earners and put more control in the hands of the federal government. Sanders argues that democratic socialism wouldn’t be anything like the totalitarian Marxist regimes of the past because the people would be in charge. All socialists describe themselves as democratic, and usually win favor by promising to restore power to the people through democratic elections. Seldom do they ever get around to it. Fidel Castro in Cuba and Kim Jong-Un both described themselves as democratic socialists. Both presided as dictators.

3. Marxism in the University

Several decades ago, U.S. News and World Report revealed an alarming increase in the number of Marxist professors on university campuses. In affirmation of the claim that ten thousand Marxist professors roam America’s college campuses, Herbert London said, “Every discipline has been affected by its preachment, and almost every faculty now counts among its members a resident Marxist scholar.” Among them, Duke University’s Fredric Jameson and Lancaster University’s Terry Eagleton. At any major university you’ll find some professors overtly evangelistic about Marxism and many others sympathetic to Marx’s aims.

The same is likely true in your state capital and in Washington, D.C.4