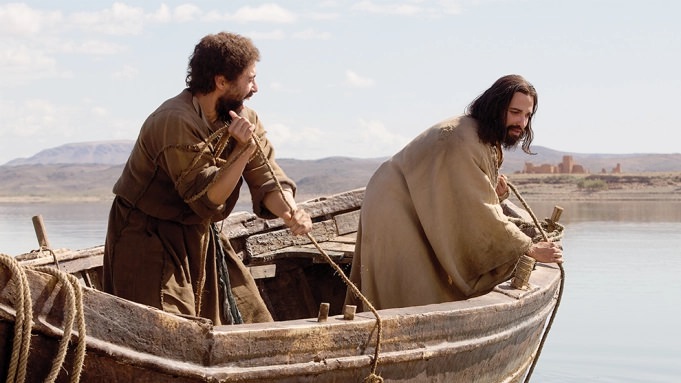 Peter and Jesus
Image by: Unknown 1

Previously, we examined two decisive stages of Saint Peter's life: the call to follow Jesu, and then his confession of faith: “You are Christ, the Messiah.” It is a confession that is still lacking, initial, and yet open....This initial confession carries within it, like a seed, the future faith of the Church. In this ection, we want to consider another two important events in the life of Saint Peter: the multiplication of the loaves and the the Lord's call to be Pastor of the universal Church.

Let us now begin with the multiplication of the loaves. You know that the people had been listening to the Lord for hours. At the end, Jesus says: They are tired and hungry; we must give these people something to eat. The Apostles ask: But how? vAnd Andrew, Peter’s brother, draws Jesus’ attention to a boy who has with him five loaves of bread and two fish. But what is this for so many people. The Lord has the crowd be seated and these five loaves and two fish distributed. And the hunger of everyone is satisfied; what is more, the Lord gives the Apostles — Peter among them — the duty to collect the abundant leftovers: twelve baskets of bread.

Afterwards,the people seeing this miracle, that seemed to be the much awaited renewal of a new “manna”, the gift of bread from heaven — wanted to make him king. But Jesus does not accept and withdraws into the hills by himself to pray. The following day, on the other side of the lake in the Synagogue of Capernaum, Jesus explained the miracle — not in the sense of a kingship over Israel with a worldly power in the way the crowds hoped, but in the sense of the gift of self: “The bread which I shall give for the life of the world is my flesh”.

Jesus announces the Cross and with the Cross the true multiplication of the loaves, the Eucharistic bread — his absolutely new way of kingship, a way completely contrary to the expectations of the people.

We can understand that these words of the Master who does not offer Israel a worldly power, would be really difficult, indeed, unacceptable, for the people. “He gives his flesh”: what does this mean?

Even for the disciples what Jesus says in this moment seems unacceptable. It was and is for our heart, for our mentality, a “hard saying” which is a trial of faith. Many of the disciples went away. They wanted someone who would truly renew the State of Israel, of his people, and not one who said : “I give my flesh”.

We can imagine that the words of Jesus were difficult for Peter too, who at Caesarea Philippi had protested at the prophecy of the Cross. However, when Jesus asked the Twelve: “ Will you also go away? ” Peter reacted with, the enthusiasm of his generous heart, guided by the Holy Spirit.

Speaking on everyone’s behalf, he answered with immortal words, which are also our words: “Lord, to whom shall we go? You have the words of eternal life; and we have believed, and have come to know, that you are the Holy One of God”.

Here, as at Caesarea, Peter begins with his words the confession of the Church’s Christological faith and becomes spokesman also for the other Apostles and for us believers of all times. This does not mean that he had already understood the mystery of Christ in all its depth; his faith was still at the beginning of a journey of faith. It would reach its true fullness only through the experience of the Paschal events.

And so, our faith too is always an initial one, and we have still to carry out a great journey. But it is essential that it is an open faith and that we allow ourselves to be led by Jesus, because he does not only know the Way, but he is the Way.

Peter’s rash generosity does not protect him, however, from the risks connected with human weakness. Moreover, it is what we too can recognize in our own lives. Peter followed Jesus with enthusiasm; he overcame the trial of faith, abandoning himself to Christ. The moment comes, however, when he gives in to fear and falls: he betrays the Master.

The school of faith is not a triumphal march but a journey marked daily by suffering and love, trials and faithfulness. Peter, who promised absolute fidelity, knew the bitterness and humiliation of denial: the arrogant man learns the costly lesson of humility. Peter, too, must learn that he is weak and in need of forgiveness. Once his attitude changes and he understands the truth of his weak heart of a believing sinner, he weeps in a fit of liberating repentance. After this weeping he is finally ready for his mission.

On a spring morning, this mission will be entrusted to him by the Risen Christ. The encounter takes place on the shore of the Lake of Tiberias. John the Evangelist recounts the conversation between Jesus and Peter in that circumstance. There is a very significant play on words.

Prior to the experience of betrayal, the Apostle certainly would have said: “I love you (agapo - se) unconditionally. ”Now that he has known the bitter sadness of infidelity, the drama of his own weakness, he says with humility: “Lord; you know that I love you (filo - se)”, that is, “I love you with my poor human love.” Christ insists: “Simon, do you love me with this total love that I want? ”And Peter repeats the response of his humble human love: “Kyrie, filo - se”, “Lord, I love you as I am able to love you.” The third time Jesus only says to Simon : “ Fileis - me?”, “Do you love me? ”

Simon understands that his poor love is enough for Jesus, it is the only one of which he is capable; nonetheless he is grieved that the Lord spoke to him in this way. He thus replies : “Lord, you know everything; you know that I love you (filo - se).

”This is to say that Jesus has put himself on the level of Peter, rather than Peter on Jesus’ level! It is exactly this divine conformity that gives hope to the Disciple, who experienced the pain of infidelity. From here is born the trust that makes him able to follow [Christ] to the end: “This he said to show by what death he was to glorify God. And after this he said to him, ‘Follow me’”

From that day, Peter “followed” the Master with the precise awareness of his own fragility; but this understanding did not discourage him. Indeed, he knew that he could count on the presence of the Risen One beside him.

It was a long journey for Peter that made him a trustworthy witness, “rock” of the Church, because he was constantly open to the action of the Spirit of Jesus.

Peter qualifies himself as a “witness of the sufferings of Christ as well as a partaker in the glory that is to be revealed”. When he wrote these words he was already elderly, heading towards the end of his life that would be sealed with martyrdom. He was then ready to describe true joy and to indicate where it could be drawn from : the source is believing in and loving Christ with our weak but sincere faith, notwithstanding our fragility. He would therefore write to the Christians of his community, and says also to us: “Without having seen him you love him; though you do not now see him you believe in him and rejoice with unutterable and exalted joy. As the outcome of your faith you obtain the salvation of your souls”1, 2 .