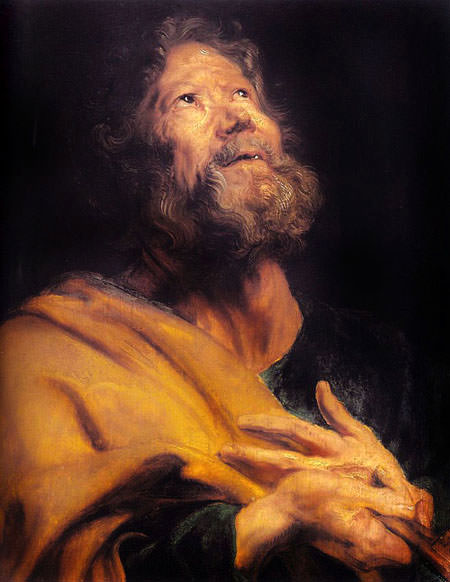 In the last Catechesis, I spoke of Peter as the first of the Apostles; today let us return once again to this great and important figure of the Church.

In recounting Jesus' first meeting with Simon, the brother of Andrew, John the Evangelist records a unique event: Jesus "looked at him and said, "So you are Simon the son of John? You shall be called Cephas (which means Peter)' ".

It was not Jesus' practice to change his disciples' names: apart from the nickname "sons of thunder", which in specific circumstances he attributed to the sons of Zebedee and never used again. He never gave any of his disciples a new name.

Yet, he gave one to Simon, calling him "Cephas". This name was later translated into Greek as Petros and into Latin as Petrus. And it was translated precisely because it was not only a name; it was a "mandate" that Petrus received in that way from the Lord. The new name Petrus was to recur frequently in the Gospels and ended by replacing "Simon", his original name.

This fact acquires special importance if one bears in mind that in the Old Testament, a change of name usually preceded the entrustment of a mission.

Indeed, many signs indicate Christ's desire to give Peter special prominence within the Apostolic College: in Capernaum the Teacher enters Peter's house; when the crowd becomes pressed on the shore of Lake Genesaret, seeing two boats moored there, Jesus chooses Simon's; when, on certain occasions, Jesus takes only three disciples with him, Peter is always recorded as the first of the group: as in the raising of Jairus' daughter, in the Transfiguration and during the agony in the Garden of Gethsemane. And again: the Temple tax collectors address Peter and the Teacher pays only for himself and Peter; it is Peter's feet that he washes first at the Last Supper, and for Peter alone he prays that his faith will not fail so that he will be able to strengthen the other disciples in faith.

Moreover, Peter himself was aware of his special position: he often also spoke on behalf of the others, asking for the explanation of a difficult parable, the exact meaning of a precept or the formal promise of a reward.

It is Peter in particular who resolves certain embarrassing situations by intervening on behalf of all. Thus, when Jesus, saddened by the misunderstanding of the crowd after the Bread of Life discourse, asks: "Will you also go away?", Peter's answer is peremptory in tone: "Lord, to whom shall we go? You have the words of eternal life".

Equally decisive is the profession of faith which, again on behalf of the Twelve, he makes near Caesarea Philippi. To Jesus' question: "But who do you say that I am?", Peter answers: "You are the Christ, the Son of the living God". Jesus responded by pronouncing the solemn declaration that defines Peter's role in the Church once and for all: "And I tell you: you are Peter, and on this rock I will build my Church.... I will give you the keys of the Kingdom of Heaven, and whatever you bind on earth will be bound in heaven, and whatever you loose on earth will be loosed in heaven".

In themselves, the three metaphors that Jesus uses are crystal clear: Peter will be the rocky foundation on which he will build the edifice of the Church; he will have the keys of the Kingdom of Heaven to open or close it to people as he sees fit; lastly, he will be able to bind or to loose, in the sense of establishing or prohibiting whatever he deems necessary for the life of the Church. It is always Christ's Church, not Peter's.

Thus, vivid images portray what the subsequent reflection will describe by the term: "primacy of jurisdiction".

This pre-eminent position that Jesus wanted to bestow upon Peter is also encountered after the Resurrection: Jesus charges the women to announce it especially to Peter, as distinct from the other Apostles; it is to Peter and John that Mary Magdalene runs to tell them that the stone has been rolled away from the entrance to the tomb, and John was to stand back to let Peter enter first when they arrived at the empty tomb.

Then, Peter was to be the first witness of an appearance of the Risen One. His role, decisively emphasized, marks the continuity between the pre-eminence he had in the group of the Apostles and the pre-eminence he would continue to have in the community born with the paschal events, as the Book of Acts testifies.

His behaviour was considered so decisive that it prompted remarks as well as criticism.

At the so-called Council of Jerusalem Peter played a directive role, and precisely because he was a witness of authentic faith, Paul himself recognized that he had a certain quality of "leadership ".

Moreover, the fact that several of the key texts that refer to Peter can be traced back to the context of the Last Supper, during which Christ conferred upon Peter the ministry of strengthening his brethren, shows that the ministry entrusted to Peter was one of the constitutive elements of the Church, which was born from the commemoration of the Pasch celebrated in the Eucharist.

This contextualization of the Primacy of Peter at the Last Supper, at the moment of the Institution of the Eucharist, the Lord's Pasch, also points to the ultimate meaning of this Primacy: Peter must be the custodian of communion with Christ for all time. He must guide people to communion with Christ; he must ensure that the net does not break, and consequently that universal communion endures. Only together can we be with Christ, who is Lord of all.

Thus, Peter is responsible for guaranteeing communion with Christ with the love of Christ, guiding people to fulfil this love in everyday life. Let us pray that the Primacy of Peter, entrusted to poor human beings, will always be exercised in this original sense as the Lord desired, and that its true meaning will therefore always be recognized by the brethren who are not yet in full communion with us.1, 2